Al-mi'raj. For the Night Journey of the Islamic prophet Muhammad, see Isra and Mi'raj. 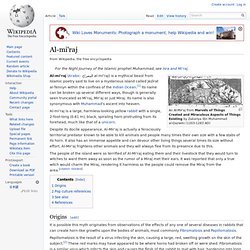 An Al-Mir'aj from Marvels of Things Created and Miraculous Aspects of Things Existing by Zakariya Ibn Muhammad al-Qazwini (1203-1283 AD) Al-mi'raj (Arabic: المعراج al-mi'raj) is a mythical beast from Islamic poetry said to live on a mysterious island called Jezîrat al-Tennyn within the confines of the Indian Ocean.[1] Its name can be broken up several different ways, though is generally seen truncated as Mi'raj, Mir'aj or just Miraj. Its name is also synonymous with Muhammad's ascent into heaven. Al-mi'raj is a large, harmless-looking yellow rabbit with a single, 2-foot-long (0.61 m), black, spiraling horn protruding from its forehead, much like that of a unicorn.

Despite its docile appearance, Al-Mir'aj is actually a ferociously territorial predator known to be able to kill animals and people many times their own size with a few stabs of its horn. Origins[edit] Pop culture references[edit] See also[edit] Jackalope. A mock-up of a stuffed Jackalope in a restaurant near Death Valley The jackalope is a mythical animal of North American folklore (a so-called "fearsome critter") described as a jackrabbit with antelope horns or deer antlers and sometimes a pheasant's tail (and often hind legs). 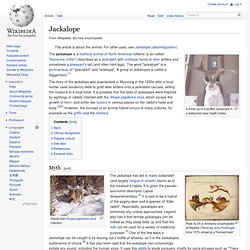 The word "jackalope" is a portmanteau of "jackrabbit" and "antelope". A group of jackalopes is called a flaggerdoot.[1] Myth[edit] Plate XLVII of Animalia Qvadrvpedia et Reptilia (Terra) by Joris Hoefnagel, circa 1575, showing a "horned hare" The jackalope has led to many outlandish (and largely tongue-in-cheek) claims as to the creature's habits.

The New York Times attributes the story's origin to a 1932 hunting outing involving Douglas Herrick (1920–2003) of Douglas, Wyoming. Mythological references to a horned rabbit creature can be found in the Huichol legends. Official recognition[edit] Moon rabbit. The Moon rabbit in folklore is a rabbit that lives on the Moon, based on pareidolia that identifies the markings of the Moon as a rabbit. 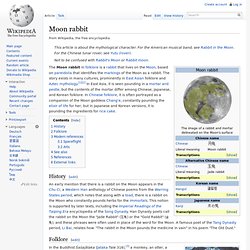 The story exists in many cultures, prominently in East Asian folklore and Aztec mythology.[1][2] In East Asia, it is seen pounding in a mortar and pestle, but the contents of the mortar differ among Chinese, Japanese, and Korean folklore. In Chinese folklore, it is often portrayed as a companion of the Moon goddess Chang'e, constantly pounding the elixir of life for her; but in Japanese and Korean versions, it is pounding the ingredients for rice cake. History[edit] Folklore[edit] The mythological white hare making the elixir of immortality on the Moon, from Chinese mythology.

Moon rabbit. Skvader. Rudolf Granberg's prepared skvader The skvader is a Swedish fictional creature that was constructed in 1918 by the taxidermist Rudolf Granberg and is permanently displayed at the museum at Norra Berget in Sundsvall. 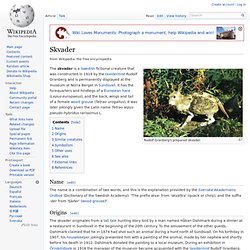 It has the forequarters and hindlegs of a European hare (Lepus europaeus), and the back, wings and tail of a female wood grouse (Tetrao urogallus). It was later jokingly given the Latin name Tetrao lepus pseudo-hybridus rarissimus L. Wolpertinger. A stuffed wolpertinger on display in the Rheinfelder Beerhall, Zurich Bavarian folklore tells of the wolpertinger (also called wolperdinger, poontinger or woiperdinger), a mythological hybrid animal allegedly inhabiting the alpine forests of Bavaria in Germany. 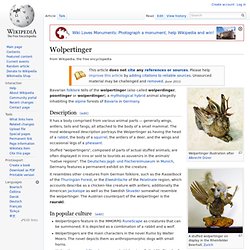 Description[edit] It has a body comprised from various animal parts — generally wings, antlers, tails and fangs, all attached to the body of a small mammal. The most widespread description portrays the Wolpertinger as having the head of a rabbit, the body of a squirrel, the antlers of a deer, and the wings and occasional legs of a pheasant. Stuffed "wolpertingers", composed of parts of actual stuffed animals, are often displayed in inns or sold to tourists as souvenirs in the animals' "native regions". In popular culture[edit]