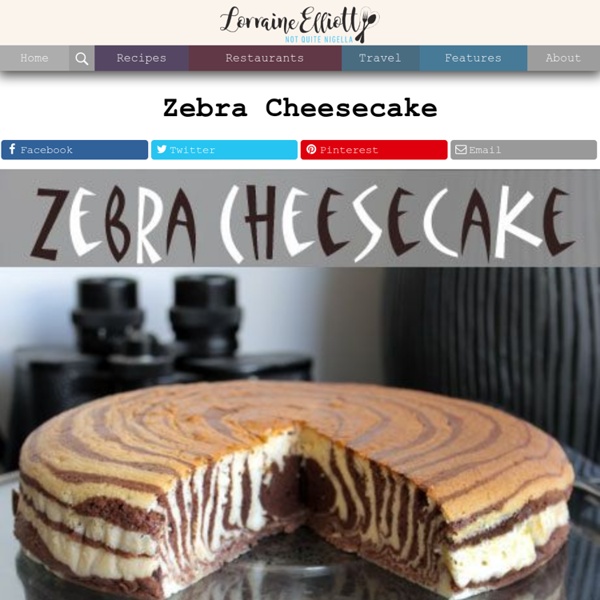 You know the story - girl meets recipe and falls in love after seeing recipe across the crowded internet. The recipe looks a bit different from what she is used to so girl is instantly intrigued. After the first tempting glimpse, girl can't get recipe out of her mind. Recipe even features in girl's dream that evening. Girl wakes up, thanks the gods of culinary fate that she has the ingredients to make that recipe and so begins the love story of the girl who met a Zebra cake. Tuty's lovely blog Scent of Spice was the blog that first introduced me to this amazing Zebra cake. The original recipe was for a regular buttercake which I had all of the ingredients for but I wanted to make it as a cheesecake. For those of you unfamiliar with Japanese cheesecakes, they're nothing like regular baked or unbaked cheesecakes. I made the batter according to the instructions and clutched my hands together anxiously in front of the oven. The End. ]( Preparation time: 30-40 minutes Baking time: 1 hour 5.

Margarita Cupcakes Cinco de Mayo will soon be here (May 5th for those non-Spanish speakers). Though it’s a Mexican holiday, here in Southern California, Cinco de Mayo celebrations are pretty widespread… mostly an excuse to eat Mexican food and partake in downing a few margaritas. We had a party last year for that very reason. These Margarita Cupcakes are fun for a Cinco de Mayo party, but they surely can be made for any festive, adult occasion…emphasis on adult. They do have a bit of tequila in them, so it’s probably best to keep them away from the little ones.

Pumpkin Pie Cupcakes with Cinnamon Cream Cheese Frosting This has been, hands down, the most popular Bake It in a Cupcake creation to date. That’s not very surprising when you consider that pumpkin pie is the second most popular pie in America. To save time, you can make the miniature pies up to 2 days in advance — just store them in the refrigerator until you’re ready to make the cupcakes. The pies can also be prepared quickly with premade pie crust—as I’ve said, there’s no shame in taking shortcuts. Scalloped Hasselback Potatoes “Scalloped” is an attractive word, isn’t it? When I hear it I think of several things: first, there’s scallops, as in the seafood—totally delicious. Then there’s the scalloped shape that can live on the edge of a pair of shorts or on the collar of a woman’s blouse—always pretty and dainty. And of course scalloped potatoes also comes to mind, which carries my imagination to a land of crispy potato skins drenched in a sea of cheese and cream. I can think of no better place to exist, actually.

How To Cook Like Your Grandmother I’ve tried lots of brownie recipes: Boxes, scratch, frosted, plain, nuts, chips, fudge … Each of them has something to like, but depending on my mood I might want a change of pace. Not any more. My wife found this recipe, and it’s perfect. Apple Cinnamon Roll Cupcakes Apple Cinnamon Roll Cupcakes By Stefani Pollack Be sure to leave your kitchen while these apple pecan cinnamon roll cupcakes are baking. When you reenter the room, you’ll get to experience a sensational smell that is so strong you can almost see it cartoonishly wafting from your oven directly to your nose.

Chocolate Cupcakes with Flaming Strawberries Call me easily amused, but these little torch-topped cupcakes delight me. Besides being a cute novelty item for a party, I think they would add a little drama to the end of a romantic meal. I've been looking for something different to serve for Valentine's dessert, and this is definitely different. The strawberries are hollowed out and filled with a bit of liquor, then ignited with a match.

Pumpkin Cupcakes With Cinnamon Cream Cheese Frosting I couldn't believe my eyes this week when I saw the ad for Pumpkin Spice Lattes in my local Starbucks. Pumpkin Spice already? But there's still a little more summer to be had, isn't there? Of course, it was impossible to stay upset for too long; after all, this is lovely pumpkin -- one of my favorite flavors of all time -- that we're talking about! Pudding Cups & bakerella.com Wicked Good Chocolate Peanut Butter Pudding Cups. They’re from the book, Sticky, Chewy, Messy, Gooey Treats for Kids by Jill O’Connor and just as good as their name states. Jill sent me and my niece a copy of her book as a little thank you for a post I did inspired by her Cheesecake Pops. Chocolate Cupcakes For 2 I have a strange relationship with sweets. I’m kind of obsessed with making them, but I’m not really that much into eating them. I don’t have a big sweet tooth (I’ll take wine and cheese over cookies almost any day of the week). And when I do get hit with a sweets craving, it’s usually short-lived. Like, if I bake a batch of something sweet, I usually take one bite of it and I’m done. And since I live alone, that usually means I’m left with a whole lot of something sweet on my hands.

Cupcake Bites « Veronica's Cornucopia Although this is a Bakerella original, I actually got the idea from a friend who learned about cake pops from me and has never even heard of Bakerella. She was going to make cake balls for her sister’s wedding, discovered that they are a pain to dip (I AGREE!! I WOULD LOVE MAKING CANDY IF IT DIDN’T EVER INVOLVE DIPPING THINGS IN CHOCOLATE!