Chocolate Cheesecake VII Recipe. Baked cherry cheesecake recipe. Bailey’s Cheesecake Cupcakes. For the past couple of years, I’ve done this thing at work where I try to make special cupcakes for everyone on my team’s birthday. 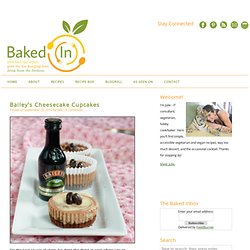 They pick a flavor off of my menu and get a half-dozen to take home, and the rest of the batch is for everyone to enjoy. This was really easy when I was on a six-person team, slightly more difficult when we kept adding on new people and eventually got into the double digits – and on top of that, they ALL have summer birthdays. Seriously. I think there’s maybe one November, but June, July, and August are teeming with coworker birthdays. This shouldn’t really matter since I switched projects in April and am again on a much smaller team, but none of the people on my new team like sweets.

Try is the operative word. These, for example, were for a June birthday. These are now on the menu for good – they’re such a fun departure from a standard cupcake. Bailey’s Cheesecake Cupcakes Preheat oven to 350 F. Source: Adapted from AllRecipes. Juniors New York Cheesecake. This is true New York Cheesecake, the one that customers line up around the block to get from Junior's restaurant in Brooklyn. 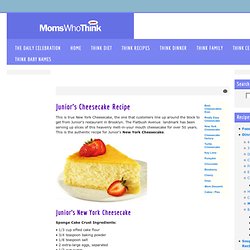 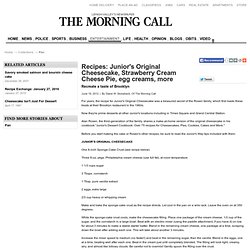 Stoneback, Of The Morning Call For years, the recipe for Junior's Original Cheesecake was a treasured secret of the Rosen family, which first made these treats at their Brooklyn restaurant in the 1960s. Now they're prime desserts at other Junior's locations including in Times Square and Grand Central Station. Alan Rosen, the third-generation of the family, shares a make-at-home version of the original cheesecake in his cookbook "Junior's Dessert Cookbook: Over 75 recipes for Cheesecakes, Pies, Cookies, Cakes and More. " Before you start making the cake or Rosen's other recipes, be sure to read the Junior's Way tips included with them. One 8-inch Sponge-Cake Crust (see recipe below) Three 8-oz. pkgs. 1 1/3 cups sugar 3 Tbsps. cornstarch 1 Tbsp. pure vanilla extract. 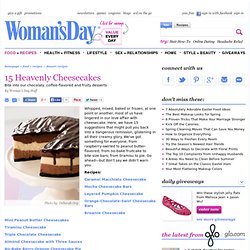 Here, we have 15 suggestions that might pull you back into a dangerous remission, glistening in all their creamy glory. We've got something for everyone, from raspberry-swirled to peanut butter-flavored; from no-bake fruitcake to bite-size bars; from tiramisu to pie. Go ahead—but don't say we didn't warn you.

Japanese Cheesecake. There are cakes which look absolutely stunning and gorgeous on the outside, but when it comes to the taste, it disappoints, and you just wished that it tasted as good as it looks. 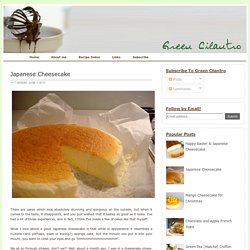