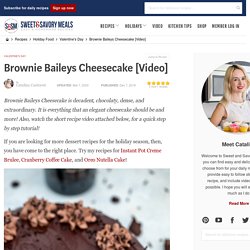 It is everything that an elegant cheesecake should be and more! Also, watch the short recipe video attached below, for a quick step by step tutorial! If you are looking for more dessert recipes for the holiday season, then, you have come to the right place. Try my recipes for Instant Pot Creme Brulee, Cranberry Coffee Cake, and Oreo Nutella Cake! Banoffee Cheesecake. I love the way a handful of mournfully overripe, positively unprepossessing bananas give rise to this vulgarly triumphant cha-cha-cha of a cheesecake. 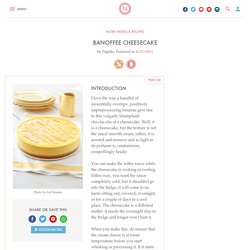 Well, it is a cheesecake, but the texture is not the usual smooth cream; rather, it is aerated and moussy and as light as its perfume is, contrariwise, compellingly heady. You can make the toffee sauce while the cheesecake is cooking or cooling. Either way, you want the sauce completely cold, but it shouldn't go into the fridge; it will come to no harm sitting out, covered, overnight, or for a couple of days in a cool place. The cheesecake is a different matter: it needs the overnight stay in the fridge and longer won't hurt it. When you make this, do ensure that the cream cheese is at room temperature before you start whisking or processing it. For US cup measures, use the toggle at the top of the ingredients list. Recipe: Raspberry Cheesecake Bars. Ingredients 3 tablespoons butter, melted3 tablespoons unsweetened applesauce2 cups graham cracker crumbs2 (8-ounce) packages reduced-fat cream cheese¾ cup sugar1 egg¼ cup egg substitute (or 2 egg whites)1 tsp vanilla1 (10-ounce) jar seedless raspberry jam or preserves1 cup fresh raspberries, lightly crushed Cleveland Clinic is a non-profit academic medical center. 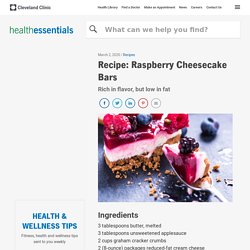 Advertising on our site helps support our mission. We do not endorse non-Cleveland Clinic products or services. Policy Directions. Food & Wine. Nutella Cheesecake Recipe. 20 Best Cheesecake Recipes. After an easy cheesecake recipe? We’ve got plenty to choose from, including baked cheesecakes, lemon cheesecake, Baileys cheesecake, and of course chocolate cheesecake recipes. Then try our summer dessert recipes. Essentially, a cheesecake only requires a crumbly biscuit base (usually made by combining crushed biscuits with melted butter) and a rich, velvety topping made with sugar and cream cheese, among a couple of other ingredients. Next, you’d usually bake your cheesecake or put it in the fridge to set.

You can flavour your cheesecake however you like, but we think the ideas below are definitely a good place to start. The best cheesecake recipes. It's official – visitors to bbcgoodfood.com absolutely love a cheesecake, and we're with you all the way. 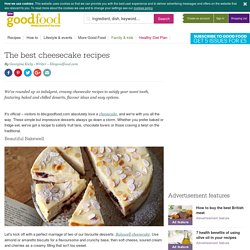 These simple but impressive desserts always go down a storm. Whether you prefer baked or fridge-set, we've got a recipe to satisfy fruit fans, chocolate lovers or those craving a twist on the traditional. Beautiful Bakewell Let's kick off with a perfect marriage of two of our favourite desserts: Bakewell cheesecake. Use almond or amaretto biscuits for a flavoursome and crunchy base, then soft cheese, soured cream and cherries as a creamy filling that isn't too sweet. New York, New York The original and best. Sweet strawberry. Double chocolate cheesecake recipe. Perfect No-Cook Cheesecake. 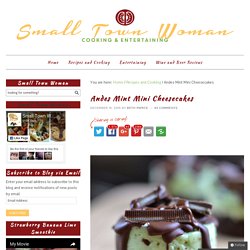 These little Andes mint cheesecakes are packed full of decadent flavor. Everything you always wanted in a mini. They are perfect balance between your sweet tooth and your workout! Besides that minis are calorie free. LOL! 14 Best Cheesecake Recipes - olive. Ahhh cheesecake… food of the gods. 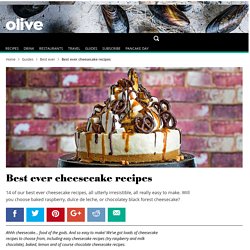 And so easy to make! We’ve got loads of cheesecake recipes to choose from, including easy cheesecake recipes (try raspberry and milk chocolate), baked, lemon and of course chocolate cheesecake recipes. Essentially, a cheesecake only requires a crumbly biscuit base (usually made by combining crushed biscuits with melted butter) and a rich, velvety topping made with sugar and cream cheese, among a couple of other ingredients. Next, you’d usually bake your cheesecake or put it in the fridge to set. You can flavour your cheesecake however you like, but we think the ideas below are definitely a good place to start. 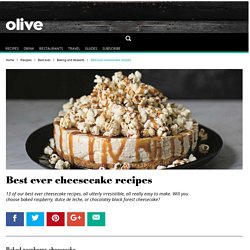 A classic and really indulgent dessert, baked cheesecake is a crowd pleaser. The fresh raspberries on top cut through the rich body of the cheesecake. Sunday Brunch - Articles - Chocolate Orange Cheesecake Recipe - All 4. 26 Aug 2016 This recipe is provided by our guest chef Tanya Burr. 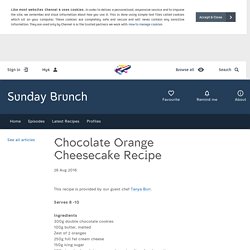 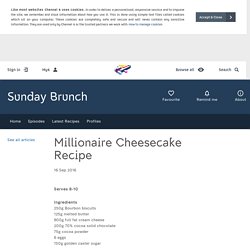 13 Best Ever Cheesecake Recipes. 13 of our best ever cheesecake recipes, all utterly irresistible, all really easy to make. 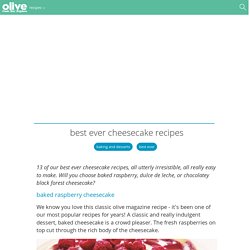 Will you choose baked raspberry, dulce de leche, or chocolatey black forest cheesecake? Blueberry swirl cheesecake. Ultra Creamy Black and White Cheesecake. Arrange the oven racks in the centre and lower third of the oven. Place a baking dish or roasting pan on the bottom rack and fill halfway with water. Preheat the oven to 162°C. Coat a 9-inch springform pan with nonstick cooking spray. Place 2 tablespoons of the sugar and the cookies in the bowl of a food processor and pulse until they become fine crumbs. Add the melted butter and pulse until moist.

Beat the cream cheese and remaining 300g cups sugar until creamy in the bowl of a standing mixer or using a hand mixer. Slowly pour the reserved vanilla batter over the chocolate layer and continue to bake until the cheesecake is just set but the centre is slightly jiggly, another 40 to 45 minutes. Before serving, let stand at room temperature for about 1 hour.

Caramel Apple Cheesecake. 1) Preheat the oven to 180C/Gas 4. 2) Place the digestive biscuits, 60g of the walnuts and brown sugar in a food processor and process until finely ground. With the motor running, add the butter through the feed tube and process until the mixture just comes together. 3) Spray the bottom and sides of a 23-cm springform tin with cooking spray. Pat the mixture evenly into the bottom of the tin, place on a baking sheet and bake in the oven until lightly golden brown and just set, about 8 minutes. Remove to a baking rack and let cool completely. 4) Combine 50g of the caster sugar and the orange zest in a food processor and process until combined. 5) Place the cream cheese in the bowl of a stand mixer fitted with the paddle attachment and beat until light and fluffy, 3 to 4 minutes. 6) Add the eggs one at a time and mix until just incorporated, scraping the sides and bottom of the bowl.

Baked Raspberry Cheesecake. Preheat the oven to 180°C, (160°C for fan ovens), Gas Mark 4. Double wrap the outside of the cake tin in clingfilm. Mix together the crushed biscuits and melted buttery spread. Press into the base of the tin and chill for 10 minutes. Beat the cream cheese until soft in a food processor (or with an electric hand mixer).

Gradually add the condensed milk and then add eggs, sour cream and vanilla. American-baked-cheesecake-recipes-anyone-cake-make. No Bake Oreo Cheesecake. Tip Hero This No Bake Oreo Cheesecake will put you on cloud 9. You can use premade pie crust to cut down on prep but there’s just a handful of ingredients and setup is a snap. Check out the quick video below: Follow us on Pinterest >> Tip Hero Ingredients & Instructions: 6 oz Oreos 4 Tbsp unsalted butter, melted 2 (8 oz blocks) cream cheese, softened to room temperature 2/3 cup granulated sugar ½ tsp kosher salt 3/4 cup crushed oreos (with some larger pieces remaining) 2 cups whipped cream* 1. No-bake cheesecakes are never as firm as their baked counterpart, but the flavor of this cheesecake is spot on despite being a slightly softer consistency.

Blueberry swirl cheesecake. Tia Maria cheesecake. Belgian Chocolate Truffle Cheesecake - Hairy Bikers' Bakeation Low Countries Part 1. Food - Recipes : Belgian chocolate truffle cheesecake. New York Cheesecake. Method Cheesecake and New York go hand-in-hand, so I just had to include this. I've been working on the recipe for quite a while, and finally perfected it during this trip. I've swapped full-fat cream cheese for a low-fat version to make my cheesecake slightly less calorific. A word of warning, though: use 'low-fat' or 'light' cream cheese rather than 'fat-free' as the fat-free version will behave differently and won't give the results you're looking for.

Place the springform pan on a larger baking pan to catch any leakage while the cheesecake is baking. New York Cheesecake.