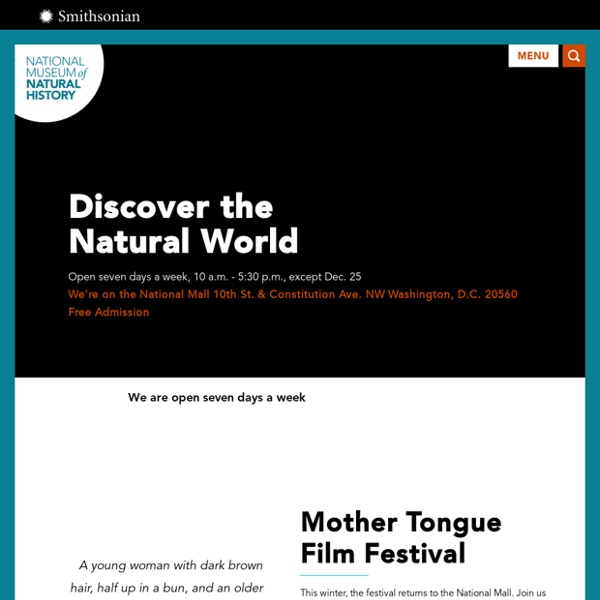 HyperEpos Responding to the lack of genre-based sites on the web, I've gathered here an array of sites focused on epic poetry, aiming for the occasionally quirky as well as the canonical vision of the genre. In addition to the links to individual poems and poets, I've tried to incorporate a few key sites for chronological study. Thus, links to sites like Perseus, The Labyrinth or Romantic Circles, with all their wealth of connections, are included at the bottom of the appropriate page.

Create Trading Cards for Historical and Fictional Characters - The Web Version Yesterday, I wrote a post about Read Write Think's Trading Cards iPad App. That post got reTweeted like crazy and this morning I had a couple of people ask if there is a version of the app that can be used on a computer. The answer to that question is yes. Read Write Think's Trading Card Creator on the web offers the same creation features that are found in the iPad app. Discuss important life science topics with the experts The study of speciation, the evolutionary processes that form new species, has long been one of the central topics of evolutionary biology. This central position is partly because the study of how new species arise, diverge and remain separate draws together many strands of study, including population genetics, ecology, behaviour, biogeography and biodiversity. It also remains one of the most intriguing questions in evolution. From appearing virtually ‘solved’ in the mid Twentieth Century, when the geographical classification of speciation mechanisms into allopatric (by far the most dominant explanation), sympatric and parapatric was almost all that needed to be said by way of explanation, speciation has recently undergone a period of intensive study with many important advances. The old frameworks for understanding speciation, such as the geographical classification mentioned above, have begun to look unsatisfactory.

Giza 3D - Dassault Systèmes 3841 tombs and monuments listed. Thanks to 10 years of collected research, Dassault Systèmes was able to reconstruct the Giza Necropolis as accurately as possible. American Woodworker With the October 2014 issue, American Woodworker merged with Popular Woodworking Magazine. PWM welcomes subscribers to AW; in issues to come, we also welcome some of the best-known and best-loved authors from AW – Alan Lacer, Spike Carlsen and more. AW subscribers will receive an issue of PWM for each remaining issue on an AW order. Inside every issue of Popular Woodworking Magazine, you’ll discover expert woodworking techniques, tricks and inspiring projects from some of the best-known names in woodworking (Toshio Odate, Jeff Miller, Don Williams, Christopher Schwarz and Mike Dunbar, to name just a few).

A Great Timeline for U.S. History Students The American Revolution Center has a fantastic interactive timeline about the American Revolution. The timeline features an easily navigated combination of text and images. Click on any event in the timeline to view a short paragraph about that event. Montado, Alentejo Quick tour A magnificent 200 year old cork oak, able to thrive on the poorest mediteranean soils. Thousands of years ago people learnt to harvest their spongy bark for a uniquely versatile material.

British Museum Sir Hans Sloane, founder of the British Museum Though principally a museum of cultural art objects and antiquities today, the British Museum was founded as a "universal museum". Its foundations lie in the will of the physician and naturalist Sir Hans Sloane (1660-1753). During the course of his lifetime Sloane gathered an enviable collection of curiosities and whilst not wishing to see his collection broken up after death, he bequeathed it to King George II, for the nation, for the princely sum of £20,000. At that time, Sloane's collection consisted of around 71,000 objects of all kinds including some 40,000 printed books, 7,000 manuscripts, extensive natural history specimens including 337 volumes of dried plants, prints and drawings including those by Albrecht Dürer and antiquities from Egypt, Greece, Rome, the Ancient Near and Far East and the Americas

Borowitz Report Our privacy promise The New Yorker's Strongbox is designed to let you communicate with our writers and editors with greater anonymity and security than afforded by conventional e-mail. When you visit or use our public Strongbox server at The New Yorker and our parent company, Condé Nast, will not record your I.P. address or information about your browser, computer, or operating system, nor will we embed third-party content or deliver cookies to your browser. Strongbox servers are under the physical control of The New Yorker and Condé Nast. Explor-A-WorldExplor-A-World Cultural learning helps to bring languages alive! One of our program’s focus is to help educate young children about how people live around the world. From daily living to special traditions, each lesson includes a unique cultural topic that kids can relate to, along with activities to get them thinking about the world around them. Our handy guide to Cultural Connections illustrates the variety of topics included in the program. Want to research some more about a particular cultural topic included in our lessons? Check out our Symbaloo page for cultural websites related to French, German, Italian, Spanish, and Chinese–as well as helpful sites that present multiple world cultures through pictures, stories, and more!

Bonferroni adjustment Simple and sophisticated Bonferroni adjustment Anywhere where you compare three or more groups or conditions or repeated measures and get a significant result on the overall test (e.g. ANOVA, Kruskal-Wallis, Friedman…) you usually then want to know which pairs of groups or conditions are sig different. A sig result on the overall test does not tell you this… It just tells you that at least one pair is different. One way to resolve this is to inspect a suitable graph, such as an error bar graph, and see which pairs look most different.