Think of Multiple Sclerosis as a Leaking Swimming Pool [Video] For 20 years neurologists have divided the neurological disorder multiple sclerosis (MS) into four distinct categories—subtypes that are supposed, in part, to help patients get the right treatments. 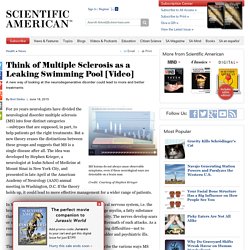 But a new theory erases the distinctions between these groups and suggests that MS is a single disease after all. The idea was developed by Stephen Krieger, a neurologist at Icahn School of Medicine at Mount Sinai in New York City, and presented in late April at the American Academy of Neurology (AAN) annual meeting in Washington, D.C. National Multiple Sclerosis Society - Wiki. The National Multiple Sclerosis Society, a United States-based non-profit organization, and its network of chapters nationwide help people affected by MS by funding research, driving change through advocacy, facilitating professional education, and providing programs and services that help people with multiple sclerosis and their families. 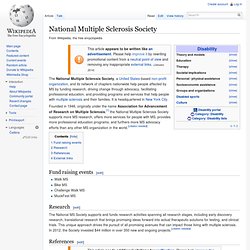 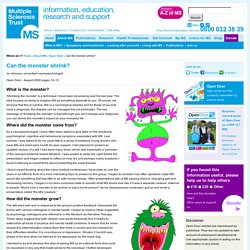 'Shrinking the monster' is a technique I have been developing over the last year. The idea focuses on trying to imagine MS as something separate to you. Of course, we all know that this is not true. Resources. The MS Society has a huge library of free resources covering everything important to people affected by MS. 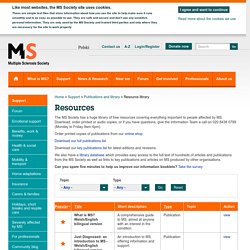 Download, order printed or audio copies, or if you have questions, give the Information Team a call on 020 8438 0799 (Monday to Friday 9am-4pm). Order printed copies of publications from our online shop Download our full publications list Download our key publications list for latest editions and revisions. We also have a library database which provides easy access to the full text of hundreds of articles and publications from the MS Society as well as links to key publications and articles on MS produced by other organisations. MS Trust StayingSmart. Animal Models Offer New Insights Into Energy Metabolism in Multiple Sclerosis Multiple Sclerosis News Today. Biotin benefits ‘clinically relevant’ in progressive multiple sclerosis. By Eleanor McDermid, Senior medwireNews Reporter Patients with progressive multiple sclerosis (MS) and their clinicians see clear improvements during treatment with a high dose of biotin, show further results from the phase III trial of the therapy. 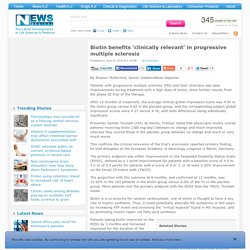 After 12 months of treatment, the average clinical global impression score was 4.05 in the biotin group versus 4.62 in the placebo group, and the corresponding subject global impression scores were 4.27 versus 4.76, with both differences being statistically significant. Presenter Ayman Tourbah (CHU de Reims, France) noted that physicians mostly scored patients receiving biotin (300 mg/day) between no change and much improved, whereas they scored those in the placebo group between no change and much or very much worse. 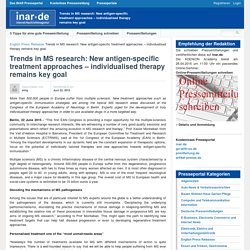 New treatment approaches such as antigen-specific immunisation strategies are among the topical MS research areas discussed at the Congress of the European Academy of Neurology in Berlin. Gene variants linked to multiple sclerosis disrupt key regulator of inflammation. With genetic roots of many autoimmune diseases pinpointed, scientists are zeroing in on the variety of molecular mechanisms triggered by these harmful variants. 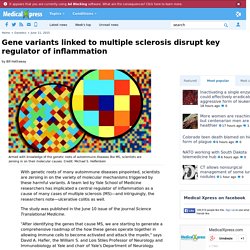 A team led by Yale School of Medicine researchers has implicated a central regulator of inflammation as a cause of many cases of multiple sclerosis (MS)—and intriguingly, the researchers note—ulcerative colitis as well. The study was published in the June 10 issue of the journal Science Translational Medicine. "After identifying the genes that cause MS, we are starting to generate a comprehensive roadmap of the how these genes operate together in allowing immune cells to become activated and attack the myelin," says David A.

Hafler, the William S. and Lois Stiles Professor of Neurology and Immunobiology at Yale and chair of Yale's Department of Neurology. Multiple sclerosis study reveals how killer T cells learn to recognize nerve fiber insulators. January 10, 2013 A micrograph of a killer T cell, a white blood cell that destroys germs or cancers, but that can sometimes attack the body’s own normal cells.National Cancer Institute Misguided killer T cells may be the missing link in sustained tissue damage in the brains and spines of people with multiple sclerosis, findings from the University of Washington reveal. 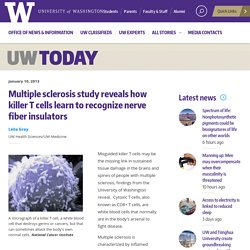 Those who do not drink coffee are 1.5 times more likely to develop MSThis was compared to people who drank at least four cups a dayScientists attribute the findings to the protective effects of caffeineWorldwide, it is estimated 2.5 million people suffer from Multiple Sclerosis By Madlen Davies for MailOnline Published: 11:30 GMT, 27 February 2015 | Updated: 16:10 GMT, 28 February 2015 Coffee could have a protective effect against multiple sclerosis (MS), new research has found. 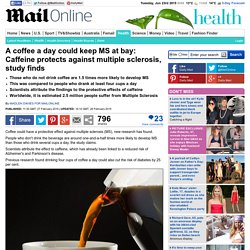 People who don't drink the beverage are around one-and-a-half times more likely to develop MS than those who drink several cups a day, the study claims. Scientists attribute the effect to caffeine, which has already been linked to a reduced risk of Alzheimer's and Parkinson's disease. Ottawa doctors behind breakthrough multiple sclerosis study. OTTAWA — A team of Ottawa doctors is preparing to publish a full report on its breakthrough multiple sclerosis treatment study that has so far eliminated the disease in those treated. 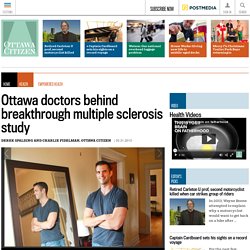 The experimental study began about 13 years ago as a last resort for patients who fail to improve on drug therapy and who suffer severe symptoms of MS. Snippets of the results have been published “here and there,” said, neurologist Dr. Mark Freedman, one of the leads of the program at The Ottawa Hospital, but its never been published in its entirety. No specific date has been set for its release, but the team’s findings are far from secret. With MS not returning in any of the 24 participants, patient success stories appear in news media across the country. Eliminating MS completely and watching patients improve surprised both Freedman and Dr. Obese girls at risk of multiple sclerosis, study finds. Obese girls are at greater risk of developing multiple sclerosis or MS-like illness, according to a new study published Wednesday in the online journal Neurology.

Researchers looked at body mass index (BMI) data from more than 900,000 children from the Kaiser Permanente Southern California Children's health study. Seventy-five of those children and adolescents between the ages of 2 and 18 were diagnosed with pediatric MS. More than 50% of them were overweight or obese, and the majority were girls. Multiple Sclerosis. Multiple sclerosis. MS Multiple Sclerosis.