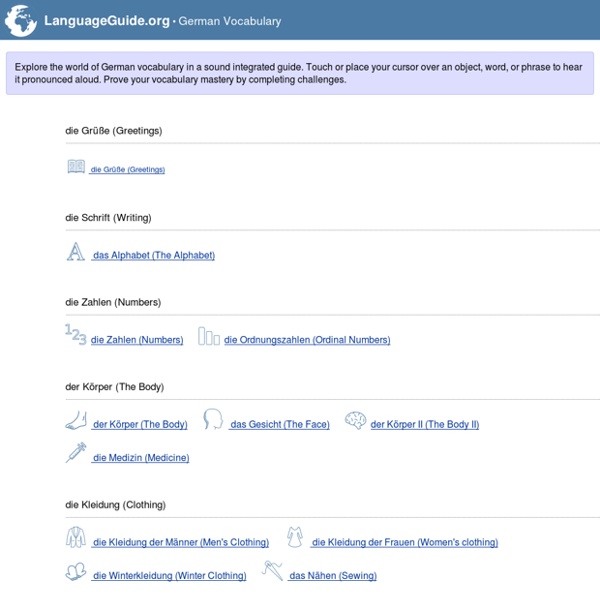 100 Amazing How-To Sites to Teach Yourself Anything Posted by Site Administrator in Online Learning May 7th, 2009 Learning new skills and expanding your knowledge doesn’t have to cost you an arm and a leg. There are loads of free resources on the Web that can help you find instructional videos, tutorials and classes to learn a wide variety of skills from fixing basic car problems to speaking another language. 20th Century - German Literature In the 20th century the following events occurred: the First World War (1914-18); the Second World War (1939-45) and the Holocaust (Shoah); and the Cold War between the USA and the USSR which led to the division of Germany. Germany began the 20th century as an Empire under the rule of Kaiser Wilhelm II. In November 1918 Germany had a Revolution which led to the abdication of the Kaiser and the creation of the Weimar Republic. The Weimar Republic existed from 1918-1933, and the Third Reich existed from 1933-1945. The Federal Republic of Germany (FRG) [die Bundesrepublik Deutschland, BRD] and the German Democratic Republic (GDR) [die Deutsche Demokratische Republik, DDR] were both formed in 1949. The reunification of Germany took place in 1990.

German: Learn Languages for Free Learn German for free online. Download free audio lessons to your computer or mp3 player and start learning German instantly. To learn more languages, please visit our complete collection of Free Language Lessons.Deutsch - warum nicht? - Web SiteAn extensive collection of introductory German lessons put together by Deutsche Welle.Audio Trainer - Web siteHelps you learn basic vocabulary that is useful for everyday life and improve your pronunciation. The 100 lessons are the result of a collaborative effort between Deutsche Welle and the Goethe-Verlag.Deutsch im Blick - Web siteA free online textbook for learning German from the University of Texas. Step into German - For Teachers - Goethe-Institut  In their free time, your students listen to music, watch movies, play sports. Why not make their personal interests part of your German classroom? Why not work with teaching materials that focus on German music, film and soccer? We provide you with a great variety of videos, podcasts and worksheets that you can use in class without much preparation time and that are bound to capture your students’ attention. And don’t be surprised if your students will find the materials so appealing they will Step into German even outside the classroom!

- Upgrade your KWL Chart to th 21st Century 0 Comments July 22, 2011 By: Silvia Tolisano Jul 22 Written by: 7/22/2011 12:39 AM ShareThis Question Bank for PGCE Interviews - Prospective student teachers - TES Connect You may have noticed that Community has been under maintenance for the past few weeks. This was due to some essential work to ensure that this separate platform was in line with the compliance standards of the rest of Tes. This work raised several other issues and as a result, we wanted to let you know that Community will not be returning. Today, there is a need, greater than ever before, to ensure security, safety, data integrity and reliability. The nature of the Community platform, its set-up, and how it has evolved, has made this a bigger and bigger challenge. Of course, engagement and interaction is still available through our many other channels.

German verb conjugation/Deutsche Verbe Konjugationen Contents Introduction Gremple is a German verb conjugation tool. German Pronunciation Guide - Paul Joyce A Guide to German Pronunciation Welcome to the new location of this online guide to German pronunciation, which I originally developed with support from the University of Exeter. The guide forms part of my Ab Initio German Course and is aimed therefore at beginners and intermediate learners of German rather than advanced students of phonetics. The sounds of German are explained with reference to the letters that students encounter in German words, and although key German phonemes are explained, a knowledge of the International Phonetic Alphabet is not a prerequsite for reading this guide. Anyone interested in German phonetics should click here for my PowerPoint letter on the phonemes of German or here for the page on German phonetics on my German Dialects linklist.

#FootballGerman: learn with the Bundesliga pros! - bundesliga.com Ever wondered how to navigate the maze of German football vocabulary? Well wonder no longer because the Bundesliga stars are on hand to help you out! Every Monday and Thursday, bundesliga.com - with a helping hand from some of the top-flight's biggest names - will be teaching those not so familiar with the wonderful German language a new word from the football lexicon. Dictionary: Click here for an overview of our Bundesliga dictionary Even better than that, though, is that with the hashtag #FootballGerman, you can converse with fellow German-language beginners around the world as to which is your favourite word! So, with no further ado, here is lesson one...