The Daily Routines of Famous Writers 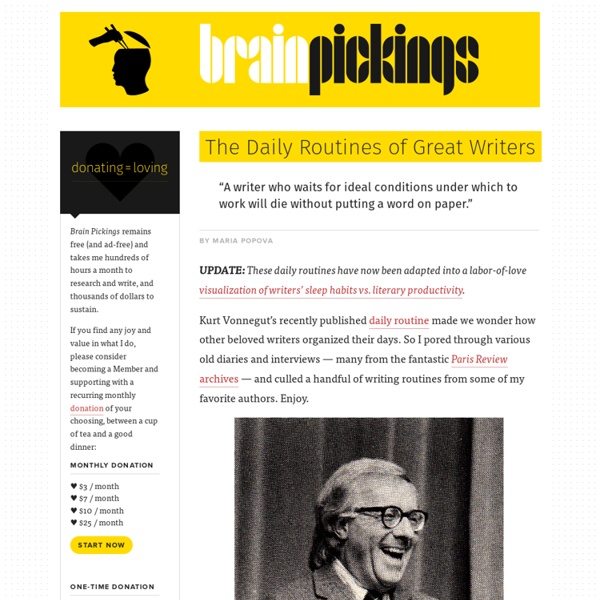 By Maria Popova UPDATE: These daily routines have now been adapted into a labor-of-love visualization of writers’ sleep habits vs. literary productivity. Kurt Vonnegut’s recently published daily routine made we wonder how other beloved writers organized their days. So I pored through various old diaries and interviews — many from the fantastic Paris Review archives — and culled a handful of writing routines from some of my favorite authors. Enjoy. Ray Bradbury, a lifelong proponent of working with joy and an avid champion of public libraries, playfully defies the question of routines in this 2010 interview: My passions drive me to the typewriter every day of my life, and they have driven me there since I was twelve. Joan Didion creates for herself a kind of incubation period for ideas, articulated in this 1968 interview: I need an hour alone before dinner, with a drink, to go over what I’ve done that day. E. I never listen to music when I’m working. Photograph by Tom Palumbo, 1956

How to Hone Your Creative Routine and Master the Pace of Productivity By Maria Popova We seem to have a strange but all too human cultural fixation on the daily routines and daily rituals of famous creators, from Vonnegut to Burroughs to Darwin — as if a glimpse of their day-to-day would somehow magically infuse ours with equal potency, or replicating it would allow us to replicate their genius in turn. And though much of this is mere cultural voyeurism, there is something to be said for the value of a well-engineered daily routine to anchor the creative process.

REVEALING YOUR HERO'S WOUND: Good Will Hunting At the beginning of your screenplay, your hero should be in a state of inertia — settling for a life that may be emotionally safe and tolerable, but that lacks passion, risk and fulfillment. Her life might be filled with activity and even give the illusion that she’s striving for something, but all this effort is ultimately going nowhere. In other words, your hero should be stuck. The reason for all this spinning in place is that the hero is living in his or her identity — the emotional armor we all carry to protect us from our deepest fears.

Kurt Vonnegut's Daily Routine by Maria Popova “In an unmoored life like mine, sleep and hunger and work arrange themselves to suit themselves, without consulting me.” As a lover of letters and of all things Kurt Vonnegut, I spent months eagerly awaiting Kurt Vonnegut: Letters (public library), which has finally arrived and is just as fantastic as I’d come to expect. What makes the anthology particularly sublime is that strange, endearing way in which so much of what Vonnegut wrote about to his friends, family, editors, and critics appears at first glance mundane but somehow peels away at the very fabric of his character and reveals the most tender boundaries of his soul.

The Story of a Cover Girl: 80 Celebrated Designers and Illustrators Reimagine Nabokov's Lolita by Maria Popova “Love itself is not selfish, devouring or cruel, but in human beings it suffers a terrible coexistence with those qualities.” “I am a slave of images,” Vladimir Nabokov declared through his character John Krug, the brilliant philosopher in Bend Sinister. In fact, the author himself — a man of notoriously strong opinions — was both a slave of images himself and an exacting master seeking to enslave them. How To Be a Nonconformist: 22 Irreverent Illustrated Steps to Counterculture Cred from 1968 – Brain Pickings By Maria Popova “Why do you have to be a nonconformist like everybody else?,” James Thurber asked in the caption to a 1958 New Yorker cartoon depicting a woman fed up with her artist partner. It remains unknown whether the cartoon itself, or this cultural dismay shared by some of the era’s counterculture thinkers, inspired the 1968 gem How To Be a Nonconformist (public library) by Elissa Jane Karg.

Neil Gaiman's 8 Rules of Writing By Maria Popova In the winter of 2010, inspired by Elmore Leonard’s 10 rules of writing published in The New York Times nearly a decade earlier, The Guardian reached out to some of today’s most celebrated authors and asked them to each offer his or her commandments. After Zadie Smith’s 10 rules of writing, here come 8 from the one and only Neil Gaiman: WritePut one word after another. Find the right word, put it down.Finish what you’re writing.

Kurt Vonnegut term paper assignment from the Iowa Writers’ Workshop Buck Squibb. Suzanne McConnell, one of Kurt Vonnegut’s students in his “Form of Fiction” course at the Iowa Writers’ Workshop, saved this assignment, explaining that Vonnegut “wrote his course assignments in the form of letters, as a way of speaking personally to each member of the class.” The result is part assignment, part letter, part guide to writing and life. This assignment is reprinted from Kurt Vonnegut: Letters, edited by Dan Wakefield, out now from Delacorte Press. This course began as Form and Theory of Fiction, became Form of Fiction, then Form and Texture of Fiction, then Surface Criticism, or How to Talk out of the Corner of Your Mouth Like a Real Tough Pro. It will probably be Animal Husbandry 108 by the time Black February rolls around.

I Feel Fine by Lelial Thibodeau - Adventure, Dystopian, Fantasy, Horror, Sci Fi, Thriller Their truck hit a particularly deep pothole, jarring Anders Jagerskold from a rough, fretful slumber. His dreams infested with the stir of the dead still lining the roads. He sat up, rubbing the sleep from his eyes.