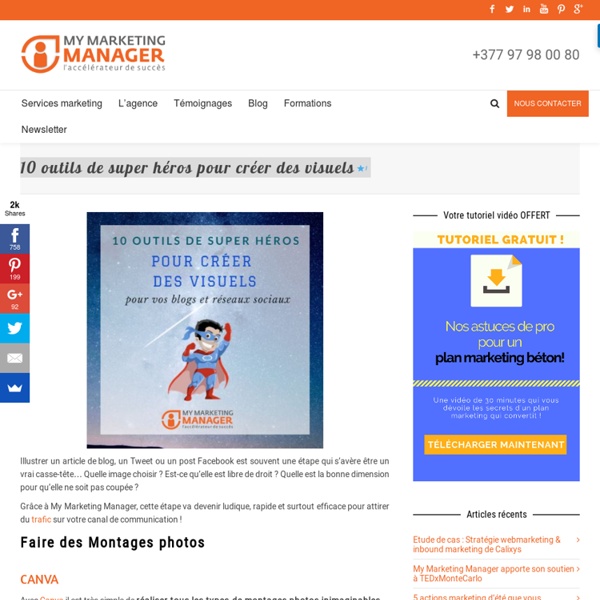 Today we’re kicking off Evernote’s Creative Series, a collection of posts about creative uses for Evernote and the creative people behind them. Recently, we learned that lots of people use Evernote to create mood boards, which got us thinking…what the heck’s a mood board? Luckily, Julie Gomoll was kind enough to explain and show off her process. When dealing with a client, how does one elicit the kind of presence they want to convey? Psychophysics: Are We Biological Billiard Balls? Psychophysics secretly permeates our people-sciences (it assumes we’re motivated by physics-like forces). But as every infant—each a great causality detector—knows, but many scientists ignore, people aren’t biological billiard balls. 1. 3 Photo Editing Tools for Eye-Catching Instagram Posts One cannot deny the fact that social media is an addiction that one doesn't want to kick, and for a good reason. With over two billion active social media users worldwide it makes sense. Whilst some may find their substance of choice is Facebook or Twitter, the real trap is Instagram. It’s easy to see how people get crazily addicted to such an app with it’s creative filters, artistic photography and those narcissistic images we just love to hate. With over 300 million monthly active users, It’s evident that Instagram is one of the top social media choices for bloggers and small business owners. Instagram has become a powerful marketing tool-- but simplistic photos taken from one’s mobile phone with vintage inspired filters does not take the cake.

Select an English topic from the 54 topics available Each topic has 10 pictures (Beginner) or 20 pictures (Intermediate) with their accompanying written texts and spoken English recordings. There are 56 Beginner topics and 58 Intermediate topics to choose from. All the topics are free to use. Products on EdSurge OneNote is a flexible tool allowing content creation and sharing within the classroom. The tool uses standard Microsoft Office authoring tools and allows students and teachers to imbed voice recordings and other content from the internet. OneNote can be downloaded and used for free, but the full version of the product is available through the purchase of Microsoft Office. OneNote is a flexible tool allowing teachers to create and organize content, from lesson plans to assignments to field trip details.

Finding a truly decent and powerful image editor is a rare event. Especially if you want it to be free on top of that. Enter Fotor – the image editor is one of those noteworthy exceptions. It’s not only free, but also available for all platforms: There are excellent smartphone apps for Android and iOS, respectively, and the desktop versions work with Windows or Mac. The mobile app is especially interesting for all the smartphone photographers out there because its image enhancing features work really well. Free will debate: What does free will mean and how did it evolve? Illustration by Alex Eben Meyer It has become fashionable to say that people have no free will. Many scientists cannot imagine how the idea of free will could be reconciled with the laws of physics and chemistry. Brain researchers say that the brain is just a bunch of nerve cells that fire as a direct result of chemical and electrical events, with no room for free will. Others note that people are unaware of some causes of their behavior, such as unconscious cues or genetic predispositions, and extrapolate to suggest that all behavior may be caused that way, so that conscious choosing is an illusion. Scientists take delight in (and advance their careers by) claiming to have disproved conventional wisdom, and so bashing free will is appealing.

5 Fantastic Sources For Free Stock Images I’ve found myself harping on quite a lot in recent blogs about how social media has gone visual. Now, as worrying as that may sound to all you budding young bloggers out there, the fact that the visual web has taken off in spectacular fashion should not actually be too much of a concern per se. No.