Regole e principi. Writing. Myth Story Tale. The Narrative Paradigm. Are you monomythic? Joseph Campbell and the hero’s journey. When you tell someone a story, do you plan it out beforehand so that it’ll sound good? 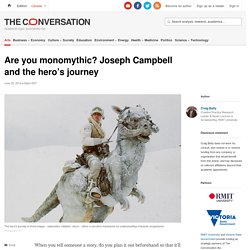 Do you carefully plot what you’ll say, in a specific order? Or does the story find a way of telling itself, the plot coming from within you – from an inherent understanding of story structure? This is what American mythologist, anthropologist, writer and professor Joseph Campbell (1904–1987) was interested in. Inspired as a child by Native American culture and artefacts, he spent his life comparing myths and religions from around the world in an attempt to understand humanity and its fascination with stories.

This resulted in numerous publications, including the books The Mythic Image (1974), The Hero with a Thousand Faces (1949), and with journalist Bill Moyers, The Power of Myth (1988). Periodic Table of Storytelling.

Reference. Story Dice - a creative storytelling tool from Dave Birss. As you can see above, you get five story dice (or nine dice, if you prefer), each with a random image on it. 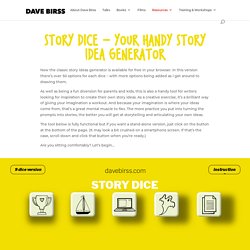 Your job is quite simply to turn these prompts into a story. I recommend you try to work with the order they appear on the screen but if you’re finding it tough, you can do some swapsies. You also don’t need to take the image literally. You can use the dice metaphorically or as representations of other concepts. 5 Simple Tips for Telling Better Anecdotal Stories. Stories are the lifeblood of community. 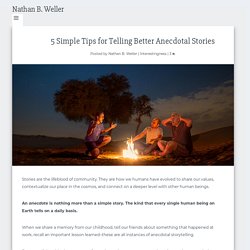 They are how we humans have evolved to share our values, contextualize our place in the cosmos, and connect on a deeper level with other human beings. An anecdote is nothing more than a simple story. The kind that every single human being on Earth tells on a daily basis. Do Not Let One Bad Data Point Ruin The New Narrative - Evolution Counseling.

Telling Is Listening: Ursula K. Le Guin on the Magic of Real Human Conversation. Every act of communication is an act of tremendous courage in which we give ourselves over to two parallel possibilities: the possibility of planting into another mind a seed sprouted in ours and watching it blossom into a breathtaking flower of mutual understanding; and the possibility of being wholly misunderstood, reduced to a withering weed. 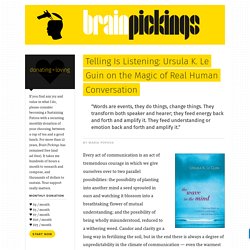 Candor and clarity go a long way in fertilizing the soil, but in the end there is always a degree of unpredictability in the climate of communication — even the warmest intention can be met with frost. Yet something impels us to hold these possibilities in both hands and go on surrendering to the beauty and terror of conversation, that ancient and abiding human gift. And the most magical thing, the most sacred thing, is that whichever the outcome, we end up having transformed one another in this vulnerable-making process of speaking and listening.

Why and how we do that is what Ursula K. How Impact Businesses Use Storytelling to Build Movements. An impact business or social enterprise is an entity that works to solve a social problem through humanitarian or economic intervention, and usually sustains itself by raising funds or by generating profit. 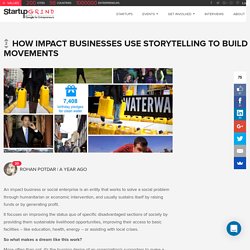 It focuses on improving the status quo of specific disadvantaged sections of society by providing them sustainable livelihood opportunities, improving their access to basic facilities -- like education, health, energy -- or assisting with local crises. So what makes a dream like this work? More often than not, it's the burning desire of an organization's supporters to make a difference. Thus, social brands represent the human stories of fights, hopes, and triumphs. These stories form the pillars of the company's narrative. Perché usare lo storytelling aziendale in un piano di digital marketing. Come funziona il linguaggio metaforico nello storytelling per richiamare risposte emozionali. 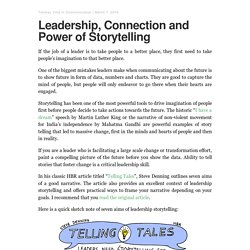 One of the biggest mistakes leaders make when communicating about the future is to show future in form of data, numbers and charts. They are good to capture the mind of people, but people will only endeavor to go there when their hearts are engaged. Storytelling has been one of the most powerful tools to drive imagination of people first before people decide to take actions towards the future. The historic “I have a dream” speech by Martin Luther King or the narrative of non-violent movement for India’s independence by Mahatma Gandhi are powerful examples of story telling that led to massive change, first in the minds and hearts of people and then in reality. Narrative4Change. L’era della narrazione, tra storytelling e post-verità — 00:am. 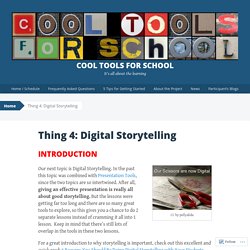 In the past this topic was combined with Presentation Tools, since the two topics are so intertwined. After all, giving an effective presentation is really all about good storytelling. But the lessons were getting far too long and there are so many great tools to explore, so this gives you a chance to do 2 separate lessons instead of cramming it all into 1 lesson. Keep in mind that there’s still lots of overlap in the tools in these two lessons. Storied Adventures. Narratives. Grand Format / Narration non linéaire.

Let’s ditch the dangerous idea that life is a story ... ‘Each of us constructs and lives a “narrative”,’ wrote the British neurologist Oliver Sacks, ‘this narrative is us’. 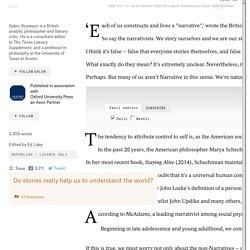 Likewise the American cognitive psychologist Jerome Bruner: ‘Self is a perpetually rewritten story.’ And: ‘In the end, we become the autobiographical narratives by which we “tell about” our lives.’ Or a fellow American psychologist, Dan P McAdams: ‘We are all storytellers, and we are the stories we tell.’ And here’s the American moral philosopher J David Velleman: ‘We invent ourselves… but we really are the characters we invent.’ And, for good measure, another American philosopher, Daniel Dennett: ‘we are all virtuoso novelists, who find ourselves engaged in all sorts of behaviour… and we always put the best “faces” on it we can.

So say the narrativists. Forbes Welcome. More resources. STORY Seminar with Robert McKee. Ron Donaldson, knowledge ecologist, facilitating homo narrans towards an emergent Sustainocene future. 50+ Web Ways to Tell a Story. Susan Sontag on Storytelling, What It Means to Be a Moral Human Being, and Her Advice to Writers. Susan Sontag (January 16, 1933–December 28, 2004) spent a lifetime contemplating the role of writing in both the inner world of the writer and outer universe of readers, which we call culture — from her prolific essays and talks on the task of literature to her devastatingly beautiful letter to Borges to her decades of reflections on writing recorded in her diaries. But nowhere did she address the singular purpose of storytelling and the social responsibility of the writer with more piercing precision than in one of her last public appearances — a tremendous lecture on South African Nobel laureate Nadine Gordimer titled “At the Same Time: The Novelist and Moral Reasoning,” which Sontag delivered shortly before her death in 2004.

The speech is included in and lends its title to the endlessly enriching posthumous anthology At the Same Time: Essays and Speeches (public library), which also gave us Sontag on beauty vs. interestingness, courage and resistance, and literature and freedom. Tim Sheppard's Storytelling Resources for Storytellers. Timescape. CONSTRUCTION/ECRITURE D'UNE HISTOIRE. The 5 Levels of Digital Storytelling. By kylemawer It’s our pleasure to introduce a guest blog post by James Taylor, who has been adapting gaming elements (such as leveling up) and applying them to digital storytelling. 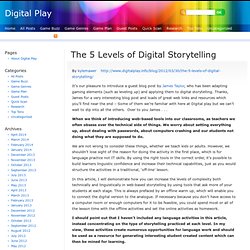 Thanks, James for a very interesting blog post and loads of great web links and resources which you’ll find near the end – Some of them we’re familiar with here at Digital play but we can’t wait to dip into all the others. Over to you James . . . Digital Technolgy Enhanced Storytelling. Visual Storytelling: Istruzioni per l'uso. La quotidianità è fatta di storie, anche se spesso non ce ne rendiamo conto, ci muoviamo attraverso narrazioni fatte di emozioni, persone e valori. 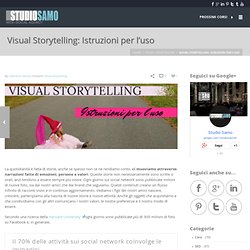 Anthropology as Theoretical Storytelling. [This essay is part of the Fall 2015 Savage Minds Writers’ Workshop series.] Anthropologists are storytellers. We tell stories: other’s stories, our own stories, stories about other’s stories. Will Self: Are humans evolving beyond the need to tell stories? A few years ago I gave a lecture in Oxford that was reprinted in the Guardian under the heading: “The novel is dead (this time it’s for real)”.

In it I argued that the novel was losing its cultural centrality due to the digitisation of print: we are entering a new era, one with a radically different form of knowledge technology, and while those of us who have what Marshal McLuhan termed “Gutenberg minds” may find it hard to comprehend – such was our sense of the solidity of the literary world – without the necessity for the physical book itself, there’s no clear requirement for the art forms it gave rise to. I never actually argued that the novel was dead, nor that narrative itself was imperilled, yet whenever I discuss these matters with bookish folk they all exclaim: “But we need stories – people will always need stories.” As if that were an end to the matter.

And there is something vicious about all that book learning, especially when it had to be done by rote. The Perils of Data Story Telling: The Virtues of Data Documentaries. Many times, my young children ask me to read them a story before sleeping. We have wide variety of children's books from which to choose. My children tend to go back to the same stories: those that capture their attention, spark their imagination, and have an appealing ending. They enjoy stories for which I inject theatrical creativity, a thick accent, a singing tone, or want participation from my small audience to become active part of the story. Good stories capture our attention and imagination, engage the audience. Storytelling. Storytelling. Patrizia Soffiati - Google+ - Cos'è una storia? +You Search Images Maps Play YouTube News. 4 cose che i brand possono fare con lo storytelling. Why Storytelling Is The Ultimate Weapon. In business, storytelling is all the rage.

Use storytelling to communicate your company’s values. Giving Your Brand Primal Power Through Storytelling. “Once upon a time…” Those four little words, when combined, have an amazing allure, simply because we know that they signify that something special is about to happen…a story. Personal & Business Storytelling. Infographic: Storytelling Vs. Corporate Speak. Future of StoryTelling. Storytelling.