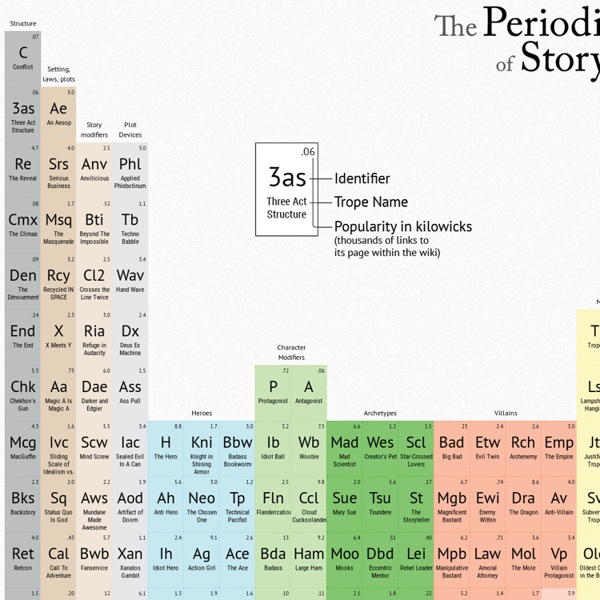 16 idées originales pour vos infographies - 99designs Blog Infographics: everyone loves ’em. They take boring numbers and data and make it beautiful and digestible. They account for hundreds of thousands of keyword searches on Google every month. And they get tons of shares on social media. How Stories Change the Brain Ben’s dying. That’s what Ben’s father says to the camera as we see Ben play in the background. Ben is two years old and doesn’t know that a brain tumor will take his life in a matter of months. Ben’s father tells us how difficult it is to be joyful around Ben because the father knows what is coming. But in the end he resolves to find the strength to be genuinely happy for Ben’s sake, right up to Ben’s last breath. Everyone can relate to this story.

Check Out These Clever LEGO Adaptations of Famous Works The Literacy Site By The Literacy Site LIT_Blog_DTOP_BelowTitle_336x280 It is not surprising that a number of productions have adapted Shakespeare to suit modern times, but never has one featured actors made of plastic bricks and an iPhone. Lego celebrated the legacy of William Shakespeare on the 400th anniversary of his death by recreating key scenes from three of his most well known and classic plays — Romeo and Juliet, A Midsummer Night’s Dream and Macbeth — using stop-motion animation. 469 Shares Share Tweet How to teach ... storytelling Once upon a time (16 years ago, to be precise), National Storytelling Week was born. The good folk of the Society for Storytelling were determined to spread a love of the art form throughout the nation – and so it came to pass, with theatres, museums, schools, hospitals, spoken-word venues and even care homes bringing the joy of a good yarn to people of all ages (and they all lived happily ever after). The festival is celebrated this year from 30 January to 6 February, and if you’d like to turn your class into a room full of raconteurs, we’ve got resources to help you do it. A good place to start is this guide, also from the Society for Storytelling, on the educational processes that take place as children learn from hearing and engaging with stories. This guide for parents can also be handed out to encourage storytelling at home.

School of Education at Johns Hopkins University-In A Single Bound: A Short Primer on Comics for Educators by Drego Little There is a long and well-documented history of prejudice against comics and what educators think they might represent. Despite this history, comics have a strong following among writers and other serious artists. Sadly, this admiration for comics and their creators has not been widespread among educators. There are many reasons for this, but the most prominent of them is that most teachers either don't know what comics do, or aren't familiar enough with the medium to make good choices. 50 Writing Prompts for All Grade Levels The collection of prompts below asks young writers to think through real or imagined events, their emotions, and a few wacky scenarios. Try out the ones you think will resonate most with your students. As with all prompts, inform students that their answers should be rated G and that disclosing dangerous or illegal things they’re involved in will obligate you to file a report with the administration or school counselors. Finally, give students the option of writing “PERSONAL” above some entries that they don’t want anyone to read.

The world's English mania - Jay Walker What is the difference between "a hearty welcome" and "a cordial reception"? In a brief, action-packed history of the English language, Kate Gardoqui explains why these semantically equal phrases evoke such different images.In her talk, longtime English teacher Patricia Ryan asks a provocative question: Is the world's focus on English preventing the spread of great ideas in other languages? (For instance: what if Einstein had to pass the TOEFL?) It's a passionate defense of translating and sharing ideas.Biologist Mark Pagel shares an intriguing theory about why humans evolved our complex system of language. Storytelling infographic : What really makes a good story? In a recent post, I noted that the term ‘storytelling’ is being applied to more and more types of content, not all of them proper stories. On top of that, there’s often an over-emphasis on the channels and media used for storytelling at the expense of the stories themselves. But all that begs the question: what does make a good story? This post draws on academic research into political storytelling, and other sources, to argue that the most effective commercial stories share seven closely related characteristics: drama, familiarity, simplicity, immersion, relatability, agency and trust in the teller. (Discussion continues below infographic.) Drama

A Visual Vocabulary for Concept Models – Eleganthack Sign up to be alerted when Pencil Me In, my book on visual thinking, is available. I’m gone a little crazy for concept models. It started with when I wrote, How to Make a Concept Model, and then when I followed up with Five Models for Making Sense of Complex Systems.