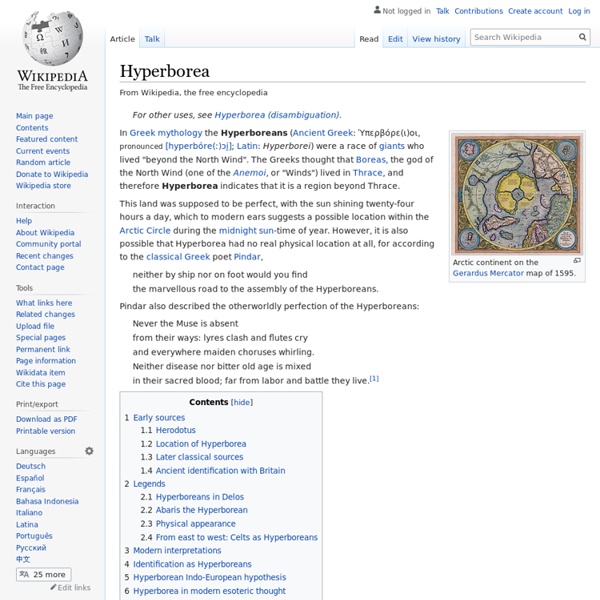 Area north of Thrace in Greek mythology In Greek mythology the Hyperboreans (Ancient Greek: Ὑπερβόρε(ι)οι, pronounced [hyperbóre(ː)ɔi̯]; Latin: Hyperborei) were a race of giants who lived "beyond the North Wind". The Greeks thought that Boreas, the god of the North Wind (one of the Anemoi, or "Winds") lived in Thrace, and therefore Hyperborea indicates that it is a region beyond Thrace. This land was supposed to be perfect, with the sun shining twenty-four hours a day, which to modern ears suggests a possible location within the Arctic Circle during the midnight sun-time of year. neither by ship nor on foot would you find the marvellous road to the assembly of the Hyperboreans. Pindar also described the otherworldly perfection of the Hyperboreans: Never the Muse is absent from their ways: lyres clash and flutes cry and everywhere maiden choruses whirling. Neither disease nor bitter old age is mixed in their sacred blood; far from labor and battle they live.[1] Early sources[edit] Herodotus[edit] Related:  Geografia fantastica e dello spirito • Mythology • -

Thule In classical and medieval literature, ultima Thule (Latin "farthermost Thule") acquired a metaphorical meaning of any distant place located beyond the "borders of the known world".[5] By the Late Middle Ages and early modern period, the Greco-Roman Thule was often identified with the real Iceland or Greenland. Sometimes Ultima Thule was a Latin name for Greenland, when Thule was used for Iceland.[6] By the late 19th century, however, Thule was frequently identified with Norway.[7][8] In 1910, the explorer Knud Rasmussen established a missionary and trading post in north-western Greenland, which he named "Thule" (later Qaanaaq). Thule has given its name to the northernmost United States Air Force airfield, Thule Air Base in northwest Greenland, and to the smaller lobe of Kuiper belt object 486958 Arrokoth, visited by the New Horizons spacecraft. Classical antiquity and the Middle Ages[edit] Strabo, in his Geographica (c. Solinus (d. Modern research[edit] Modern geography and science[edit]

Cassandra (metaphor) Metaphor originating from Greek mythology The Cassandra metaphor (variously labeled the Cassandra "syndrome", "complex", "phenomenon", "predicament", "dilemma", "curse") relates to a person whose valid warnings or concerns are disbelieved by others. The term originates in Greek mythology. Cassandra was a daughter of Priam, the King of Troy. The Cassandra metaphor is applied by some psychologists to individuals who experience physical and emotional suffering as a result of distressing personal perceptions, and who are disbelieved when they attempt to share the cause of their suffering with others. Based on clinical experience, she delineates three factors constituting the Cassandra complex: Addressing the metaphorical application of the Greek Cassandra myth, Layton Schapira states that: Of what she describes as the negative Apollonic influence, Dr. Cassandra – Modern usageMartha Mitchell effect ("The Cassandra of Watergate")Normalcy bias "The cassandra" at TV Tropes

Perseus Ancient Greek hero and founder of Mycenae Etymology[edit] Because of the obscurity of the name "Perseus" and the legendary character of its bearer, most etymologists presume that it might be pre-Greek; however, the name of Perseus' native city was Greek and so were the names of his wife and relatives. There is some idea that it descended into Greek from the Proto-Indo-European language. The further origin of perth- is more obscure. Mythology[edit] Origin at Argos[edit] Perseus was the son of Zeus and Danaë, the daughter of Acrisius, King of Argos. Fearful for his future, but unwilling to provoke the wrath of the gods by killing the offspring of Zeus and his daughter, Acrisius cast the two into the sea in a wooden chest.[7] Danaë's fearful prayer, made while afloat in the darkness, has been expressed by the poet Simonides of Ceos. Overcoming the Gorgon[edit] When Perseus was grown, Polydectes came to fall in love with the beautiful Danaë. Marriage to Andromeda[edit] Oracle fulfilled[edit]

Myths about Hyperborea Myths about Hyperborea Myths about Hyperborea, the land of forefathers in the Far North, about the country that lies "beyond the north wind", are very deeply embedded in the collective unconscious and mythology of almost all Indo-European nations (and, of course, not only of their). By itself, this fact has great importance. But, more important than the fact of their widespraeding is the question what is their meaning. If Hyperborean myths really have such an important role in the unconscious of the Indo-European peoples, they have this by their own significance, due to its interior facilties. The meanings of the myth are numerous, and can be interpreted in different keys. But, regardless of their truthiness, they are primarily about the archetypes of the North, who have their own strength and form an almost independent reality. Behind the Eagles, guardians of the gold The oldest known mention about myth of Hyperbora is one that we find in Herodotus' history. Chariot pulled by swans

Acheron Mythology[edit] In ancient Greek mythology, Acheron was known as the "river of woe", and was one of the five rivers of the Greek underworld. The word is of uncertain etymology.[2] In the Homeric poems, the Acheron was described as a river of Hades, into which Cocytus and Phlegethon both flowed.[3][4] The Suda describes the river as "a place of healing, not a place of punishment, cleansing and purging the sins of humans".[8] The river called Acheron with the nearby ruins of the Necromanteion is found near Parga on the mainland opposite Corfu. He claimed that Acheron flowed in the opposite direction from Oceanus beneath the earth under desert places. The Acheron was sometimes referred to as a lake or swamp in Greek literature, as in Aristophanes' The Frogs and Euripides' Alcestis. Modern references in popular culture[edit] Acheron was the French privateer ship that Captain Jack Aubrey pursued in the film of the book; Master and Commander: The Far Side of the World (2003) Gallery[edit]

The Simpsons: Interactive Map of Springfield Discover Springfield, where live the Simpsons family; Homer, Bart, Marge, Lisa and Maggie. Roll over the places to discover a picture of it. The map of Springfield is based on the Guide to Springfield USA . I made this interactive, the job is not finished, there are allways framegrabs to add and add some functions to the map. If you want to know more about the show or Springfield in particular, check out these links: » Zoom-out opening sequence (animated gif) (in GABF05 & FABF08) » Where is The Simpsons' Springfield? » Official site of "The Simpsons" animated series on FOX » All Intros (Runs To Couch) of the 16th/17th Season (including zoom-out couch to space) » All the Simpsons on DVD via Amazon.com » The screencaps » Everything about The Simpsons Movie Source: Wikipedia Like The Map of Springfield?

Janus Roman god of beginnings and doorways Janus had no flamen or specialised priest (sacerdos) assigned to him, but the King of the Sacred Rites (rex sacrorum) himself carried out his ceremonies. Janus had an ubiquitous presence in religious ceremonies throughout the year. As such, Janus was ritually invoked at the beginning of each ceremony, regardless of the main deity honored on any particular occasion.[citation needed] The ancient Greeks had no equivalent to Janus, whom the Romans claimed as distinctively their own. Name[edit] Etymology[edit] The name of the god Iānus, meaning in Latin 'arched passage, doorway', stems from Proto-Italic *iānu ('door'), ultimately from Proto-Indo-European *ieh₂nu ('passage'). Iānus would then be an action name expressing the idea of going, passing, formed on the root *yā- < *y-eð2- theme II of the root *ey- go from which eō, ειμι.[6] Other modern scholars object to an Indo-European etymology either from Dianus or from root *yā-.[7] Ancient interpretations[edit]

Agrigento Comune in Sicily, Italy Agrigento (Italian: [aɡriˈdʒɛnto] ( listen); Sicilian: Girgenti [dʒɪɾˈdʒɛndɪ] or Giurgenti [dʒʊɾˈdʒɛndɪ]; Ancient Greek: Ἀκράγας, romanized: Akrágas; Latin: Agrigentum or Acragas; Arabic: كركنت, romanized: Kirkant, or جرجنت Jirjant) is a city on the southern coast of Sicily, Italy and capital of the province of Agrigento. It was one of the leading cities of Magna Graecia during the golden age of Ancient Greece with population estimates in the range of 200,000 to 800,000 before 406 BC.[3][4][5][6][7] History[edit] Archaic period[edit] Around 570 BC, the city came under the control of Phalaris, a semi-legendary figure, who was remembered as the archetypal tyrant, said to have killed his enemies by burning them alive inside a bronze bull. Emmenid period[edit] Didrachm of Acragas, 490–483 BC. Classical and Hellenistic periods[edit] The period after the fall of the Emmenids is not well-known. Ancient sources considered Acragas to be a very large city at this time.

Mary Baker Eddy Mary Baker Eddy (July 16, 1821 – December 3, 1910) established the Church of Christ, Scientist, as a Christian denomination and worldwide movement of spiritual healers. She wrote and published the movement's textbook, Science and Health with Key to the Scriptures and 15 other books. She started several weekly and monthly magazines—the Christian Science Sentinel, The Christian Science Journal, and The Herald of Christian Science—that feature articles on Christian Science practice and verified testimonies of healing. Early life[edit] Bow, New Hampshire[edit] Family[edit] Eddy was born Mary Morse Baker in a farmhouse in Bow, New Hampshire to farmer Mark Baker (d. 1865) and his wife Abigail Barnard Baker, née Ambrose (d. 1849). Eddy wrote that her father had been a justice of the peace at one point and a chaplain of the New Hampshire State Militia.[9] He developed a reputation locally for being disputatious; one neighbor described him as "[a] tiger for a temper and always in a row Health[edit]

Athena Goddess of wisdom and war in ancient Greek religion and mythology Athena[b] or Athene,[c] often given the epithet Pallas,[d] is an ancient Greek goddess associated with wisdom, warfare, and handicraft[1] who was later syncretized with the Roman goddess Minerva. Athena was regarded as the patron and protectress of various cities across Greece, particularly the city of Athens, from which she most likely received her name. From her origin as an Aegean palace goddess, Athena was closely associated with the city. Etymology The Acropolis at Athens (1846) by Leo von Klenze. That is a graver matter, and there, my friend, the modern interpreters of Homer may, I think, assist in explaining the view of the ancients. Thus, Plato believed that Athena's name was derived from Greek Ἀθεονόα, Atheonóa—which the later Greeks rationalised as from the deity's (θεός, theós) mind (νοῦς, noũs). Origins Cult and patronages Panhellenic and Athenian cult Regional cults Epithets and attributes Glaukopis Tritogeneia Birth

Medieval Fantasy City Generator by watabou This application generates a random medieval city layout of a requested size. The generation method is rather arbitrary, the goal is to produce a nice looking map, not an accurate model of a city. All the actions and options are accessible via the context menu. Hot keys: 👉For development news and related stuff please check a dedicated reddit community. The first version of this generator was created for the monthly challenge #17 of the proceduralgeneration subreddit. 🏙️ To view a 3D model of a city export it as JSON and import the file into City Viewer. You can use maps created by the generator as you like: copy, modify, include in your commercial rpg adventures etc. Made with Haxe + OpenFL, the source code is available here.

Icarus Icarus and Daedalus ancient red relief plastic pottery beaker, Roman-Greece In Greek mythology, Icarus (the Latin spelling, conventionally adopted in English; Ancient Greek: Ἴκαρος, Íkaros, Etruscan: Vikare[1]) is the son of the master craftsman Daedalus, the creator of the Labyrinth. Icarus and his father attempt to escape from Crete by means of wings that his father constructed from feathers and wax. Icarus' father warns him first of complacency and then of hubris, asking that he fly neither too low nor too high, so the sea's dampness would not clog his wings nor the sun's heat melt them. Icarus ignored his father's instructions not to fly too close to the sun; when the wax in his wings melted he tumbled out of the sky and fell into the sea where he drowned, sparking the idiom "don't fly too close to the sun". This tragic theme of failure at the hands of hubris contains similarities to that of Phaëthon. Etymology[edit] Icarus /IK-uh-russ/, Ikaros Ἴκαρος Greek: ‘mallet, chopper’.