GUEST COLUMN. A border blockade and failure to get relief to earthquake survivors highlight Nepal’s sorry state Devaki Bista Initially paralysed by the magnitude and rapid succession of the quakes in 2015, the Nepal government was then able to mobilise and coordinate security forces for rescue efforts and for public safety. 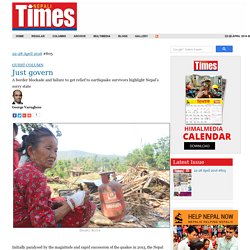 In the several weeks that followed, it was also able to galvanise the civil service to work with ward citizen forums to provide emergency cash assistance of Rs 15,000 each to households whose homes were damaged and vulnerable to the monsoons, and then to add another Rs 10,000 each to help them cope with the winter. Since then, however, the government has not provided much more relief delivery. The National Reconstruction Authority was only formally inaugurated in January 2016, a full nine months after the disaster. The government is yet to reach most of the families in the 14 worst-affected districts, even within Kathmandu Valley. What next in the Madhes? Madhesi protesters are ready to go back to the streets again, but only if their leaders behave Walking through the streets of Birganj today, one would be forgiven for doubting that this was the epicentre of the violent agitation that crippled the country for six months. 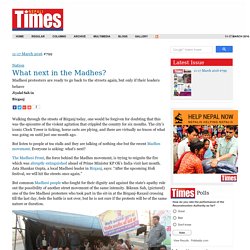 The city’s iconic Clock Tower is ticking, horse carts are plying, and there are virtually no traces of what was going on until just one month ago. But listen to people at tea stalls and they are talking of nothing else but the recent Madhes movement. Everyone is asking: what’s next? Mahantha Thakur warns of resuming blockade. Kathmandu KMC demolishes 22 illegal structures on Bagmati riverbank Kathmandu Metropolitan City (KMC) on Saturday pull... 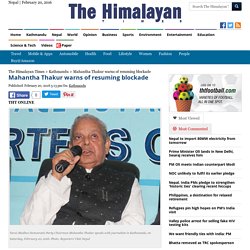 Speaking with journalists in the Capital today, Thakur said the protesters would resume the blockade if the government continued bypassing them. “If it continues, the United Democratic Madhesi Front will hold a meeting soon and announces sterner protest programmes.” Nepal’s petrol black market: super citizens and an information blackout. On February 6, trucks crossed the Birgunj-Raxaul border in both directions for the first time in more than four months. 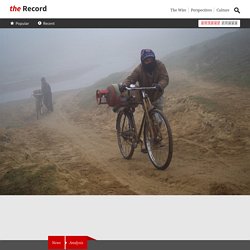 Thus ended the last and most persistent of the blockades that protesters had imposed on most major Nepal-India border crossings as part of the ongoing Madhes movement. The blockades led to widespread shortages of petrol, diesel, and liquid petroleum gas (LPG) across Nepal. As consumers wait for the fuel supply to normalize over the coming weeks, we take a closer look at the black market that developed as a result. An army of petty smugglers Navin Yadav, a resident of Itharawa Khariyani village in Dhanusha, which lies parallel to the Indian border state of Bihar, had nothing to do. NOC doubles supply of petrol to fuel stations.

Private vehicles and cabs waiting for their turn to refill petrol at the Bhadrakali-based Ripumardini Petrol Pump, operated by the Nepal Army, as the nation reels under deepening fuel crisis, in Kathmandu on Friday, October 09, 2015. 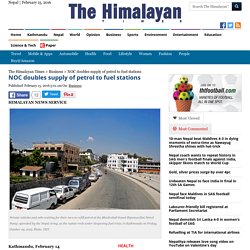 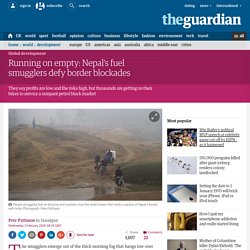 They splash across a shallow stream, all that marks this part of the border with India, and disappear again into the fog. An hour later they are back, petrol drums filled and empty gas cylinders exchanged for full ones, a disorderly procession doing what Nepal’s government has largely failed to do for four months: provide fuel to its citizens. Nepalese people have always freely crossed the open border with India, but since September, when the local ethnic Madhesi imposed a blockade on the country’s official crossings to protest against the new Nepalese constitution, unofficial cross-border trade has soared.

“At night time there are so many people crossing, it’s like Diwali,” said a smuggler who started work shortly after the blockade began. Fuel distribution to be regular from today. Private vehicles and cabs waiting for their turn to refill petrol at the Bhadrakali-based Ripumardini Petrol Pump, operated by the Nepal Army, as the nation reels under deepening fuel crisis, in Kathmandu on Friday, October 09, 2015. 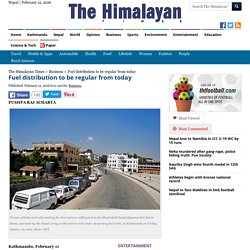 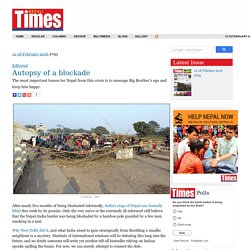 After nearly five months of being blockaded informally, India’s siege of Nepal was formally lifted this week by its proxies. Only the very naive or the extremely ill-informed still believe that the Nepal-India border was being blockaded by a bamboo pole guarded by a few men smoking in a tent. Why New Delhi did it, and what India stood to gain strategically from throttling a smaller neighbour is a mystery. Students of international relations will be debating this long into the future, and no doubt someone will write yet another tell-all bestseller relying on Indian spooks spilling the beans.

For now, we can merely attempt to connect the dots. Short of declaring war on a neighbour and bombing it, a siege like this is the easiest and cheapest way for one country to wreck another. What’s next in the Madhes? Unrest will grow again in the plains unless Kathmandu initiates confidence building measures Finally this week, the Madhesi Front backed down from its five month-long border-centric protests, and the country breathed a sigh of relief. 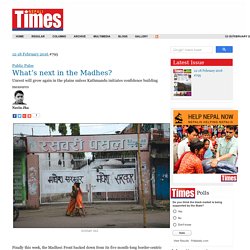 But the question on everyone’s mind is: how permanent is this? Madhesi leaders were quick to point out that they had just ‘changed the modality’ of the ongoing movement, since a substantial portion of their demands on constitutional amendments have not yet been met. The main leaders of the Madhesi Front say most of their original 11 demands have been ignored by rulers in Kathmandu, but they are mindful of the effect that the prolonged strikes and blockade were having on the general population.

The blockade that benefitted no one except smugglers. ... but the damage it caused will stay on Pic credit: Jiyalal Sah In September Madhesi parties left out of the constitution writing process decided to stage sit-ins at Nepal-India border check-points two days after New Delhi hinted that there could be obstructions. 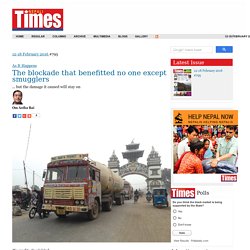 Birgunj border opens, cargo vehicles entering Nepal from India smoothly. Goods being suppplied to Nepal from India on carts across the Birgunj-Raxaul border, which was obstructed for over four months, on Saturday, January 23, 2016. Big delays in big projects. Across the country, hydropower and infrastructure projects are on hold as the blockade bites. Earthquake, blockade double whammy to Nepal's economy: Ex-PM Khanal.

Nepal's Fuel Crisis Will Push Almost a Million People Into Poverty. Flow of vehicles from India rises. The wreckage of 2015. 55 cooking gas bullets rerouted to Nepal from Raxaul.