Air Music tech Mini Grand. Let’s face it, most people don’t have room for a grand piano in their house, not even a mini one. 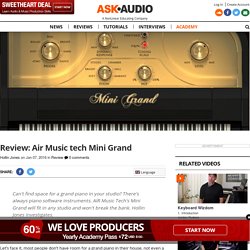 But you probably do have a gigabyte or so of free space on your hard drive and if so, Air Music Technology’s Mini Grand is a rather more effective way to get the same sounds. In VST and AU formats for Mac and VST format for Windows, it costs a fraction (under $80) and authorizes using the iLok system, either onto a USB key or bound to your computer.

There’s no standalone version which is a bit of a shame, but you can always use either your DAW or one of the standalone plug-in hosting environments available for OS X and Windows to play it without having to load a whole DAW. There’s just the one main screen in Mini Grand which reflects the simplicity of the instrument. There are seven piano models available, covering a range of moods and styles, and these are selected using the dial to the left. Price: $79.99 Pros: Very straightforward to use. True Keys : Pianos. True Keys American delivers the majestic sound of the Steinway D© nine foot concert grand. 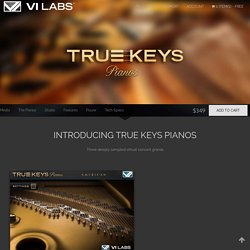 With powerful bass, robust attack and deep sustaining overtones, this versatile instrument can rise above a full orchestra or stand out in a busy mix. It also has a dark delicate side, mellow and rich, especially when played with the stereo ribbon Side mic. This grand has a classic American sound and is a staple of stages and studios worldwide. True Keys Italian is the largest piano of this collection and has the brightest sound. Often crowned the World's best piano, the Fazioli F308© provides the sound for our Italian grand. True Keys German puts you at the keys of the superb Bechstein© semi-concert grand and has the shortest length of the True Keys pianos at about 7 feet 5 inches. Komplete : Keys : The Giant. 1969 Steinway Piano VST-AU-AAX - Kontakt Instruments & Samples. Welcome to 8DIO Legacy Piano Series – a collection of deep-sampled world-class pianos. 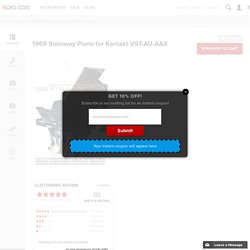 Our Legacy Piano Series marks the next evolution in hyper-realistic piano sampling – both in regards to playability, character and expressiveness of the pianos. The 1969 Steinway (Model D) Concert Grand Piano marks one of the most exquisite piano lines in existence. The tone is rich, full, yet bright and airy. It has a majestic character, which can blend into anything from classical piano pieces to rock/pop. Pianoteq Stage. Keys : The Grandeur. Ivory II Italian Grand. Ivory II Italian Grand is the second product in Synthogy's newest generation of virtual piano technology. 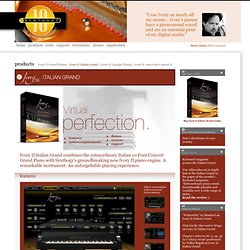 Featuring a greatly expanded sound set of the extraordinary 10 foot Concert Grand Piano, and fully integrated with the powerful new Ivory II piano DSP engine with Harmonic Resonance Modeling for true Sympathetic String Vibration, Ivory II Italian Grand shines like never before. This exceptional piano is one of the world's greatest and most sought after Concert instruments. Handcrafted in Italy, it is also one of the world's most expensive and exclusive Concert Grands, renowned for its expressive dynamics and full-bodied character. Its tone is remarkably versatile, equally at home in large scale classical works, intimate jazz playing, as well as a full range of pop styles.

The beauty of this instrument is captured in greater detail than ever, with up to 18 velocity levels, additional soft pedal and release samples and pedal noise enhancements. KAWAI-EX PRO. Sample player Technical description 10.9Gb uncompressed, 2.15Gb compressed in lossless flac format, around 5000 samples. 3 microphone positions that you can mix from the interface. 5 Velocity layers for the sustain (5 on pedal up and 5 on pedal down). 3 sets of 5 Velocities for the release, one for different sustain lenght (staccato). 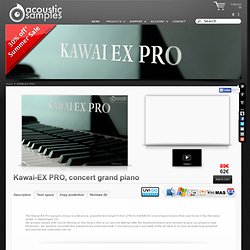 Pedal down resonance. TBO. TBO - The Big One You want to talk about raw power and dynamics, ok let? 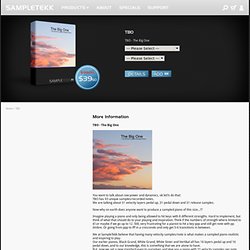 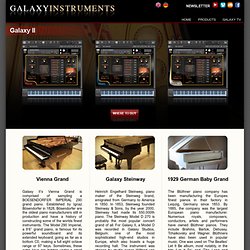 Established by Ignaz Bösendorfer in 1828, Bösendorfer are the oldest piano manufacturers still in production and have a history of constructing some of the worlds finest instruments. The Model 290 Imperial, a 9’6” grand piano, is famous for its powerful soundboard and its extended keyboard; going as far as a bottom C0, making a full eight octave range or 97 keys. Sometimes, these extra keys are hidden under a small hinged lid, on others, the colours of the extra white keys are reversed (black instead of white).

The extra keys are added primarily for increased resonance from the associated strings; that is, they vibrate sympathetically with other strings whenever the damper pedal is depressed thus creating a fuller tone. OldBlackGrand. Sample player Technical description 12.89Gb uncompressed, 2Gb compressed in lossless flac format, around 3000 samples. 2 microphone positions that you can mix from the interface (close and rim). 9 Velocity layers for the sustain. 9 Velocities for the release. 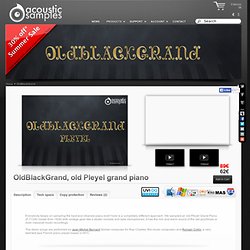 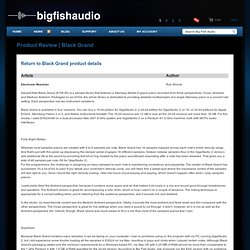 Packaged on six DVDs, the whole library is dedicated to providing detailed multisamples of a single Steinway piano in a concert hall setting. Each perspective has ten instrument variations. Black Grand is available in four versions. You can buy a 16-bit edition for GigaStudio 2; a 24-bit edition for GigaStudio 3; or 16- or 24-bit editions for Apple EXS24, Steinberg Halion 2 or 3, and Native Instruments Kontakt. The 16-bit versions are 12 GB in size ad the 24-bit versions are more than 18 GB.

Forty-Eight Strikes Whereas most sampled pianos are created with 6 to 8 samples per note, Black Grand has 16 samples mapped across each note's entire Velocity range. I particularly liked the Ambient perspective, because it contains some space and air that makes it sit nicely in a mix and sound good through headphones and speakers. Keys : The Maverick. Cinesamples.