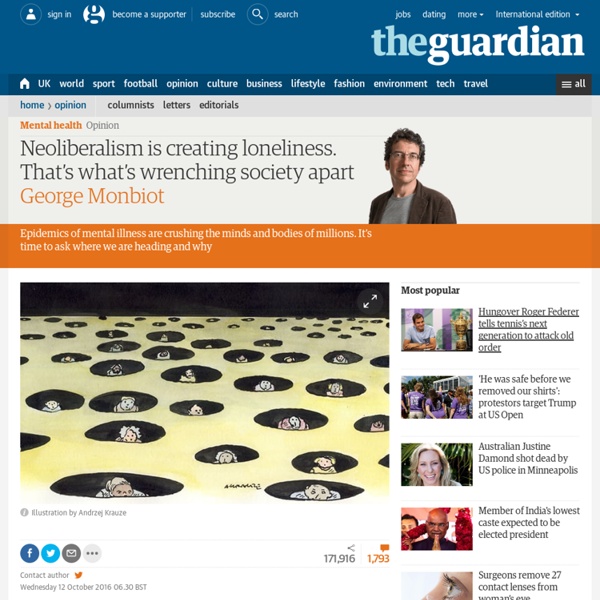 What greater indictment of a system could there be than an epidemic of mental illness? Yet plagues of anxiety, stress, depression, social phobia, eating disorders, self-harm and loneliness now strike people down all over the world. The latest, catastrophic figures for children’s mental health in England reflect a global crisis. There are plenty of secondary reasons for this distress, but it seems to me that the underlying cause is everywhere the same: human beings, the ultrasocial mammals, whose brains are wired to respond to other people, are being peeled apart. Economic and technological change play a major role, but so does ideology. Though our wellbeing is inextricably linked to the lives of others, everywhere we are told that we will prosper through competitive self-interest and extreme individualism. In Britain, men who have spent their entire lives in quadrangles – at school, at college, at the bar, in parliament – instruct us to stand on our own two feet.

Why the American Empire Was Destined to Collapse Photo Credit: ShutterStock.com March 7, 2012 | Like this article? Join our email list: Stay up to date with the latest headlines via email. Philosophy For The Brave You’ve read one of your four complimentary articles for this month. You can read four articles free per month. To have complete access to the thousands of philosophy articles on this site, please SUBSCRIBE! How-to Build a Personal Ecosystem From Scratch Olga Steidl is the Growth manager at Inbot. How many meaningful connections have you built this week? How many old connections did you nurture? Hermann Hesse on Little Joys, Breaking the Trance of Busyness, and the Most Important Habit for Living with Presence “Of all ridiculous things the most ridiculous seems to me, to be busy — to be a man who is brisk about his food and his work,” Kierkegaard admonished in 1843 as he contemplated our greatest source of unhappiness. It’s a sobering sentiment against the backdrop of modern life, where the cult of busyness and productivity plays out as the chief drama of our existence — a drama we persistently lament as singular to our time. We reflexively blame on the Internet our corrosive compulsion for doing at the cost of being, forgetting that every technology is a symptom and not, or at least not at first, a cause of our desires and pathologies.

US doesn't make cut for happiest nations list - Business - World business What makes people happy? The question, which has been debated by philosophers for centuries, now is being tackled by international bureaucrats and the results are interesting, to say the least. 24/7 Wall St. analyzed the new Organisation for Economic Co-operation and Development Better Life Index to objectively determine the happiest countries in the world. The Index is based on 11 measurements of quality of life including housing, income, jobs, community, education, the environment, health, work-life balance, and life satisfaction. We made “life satisfaction” the cornerstone of our index because it is as good a proxy for “happiness” as the survey provides. We then compared “life satisfaction” scores to the other measurements to find those economic and socio-political realities that had the highest and lowest correlation to happiness.

Neuroscientist Sam Harris Selects 12 Books Everyone Should Read By Maria Popova On an excellent recent episode of The Tim Ferriss Show — one of these nine podcasts for a fuller life — neuroscientist Sam Harris answered a listener’s question inquiring what books everyone should read. As a lover of notable reading lists and an ardent admirer of Harris’s mind and work, I was thrilled to hear his recommendations — but as each one rolled by, it brought with it an ebbing anticipatory anxiety that he too might fall prey to male intellectuals’ tendency to extoll almost exclusively the work of other male intellectuals. (Look no further than Neil deGrasse Tyson’s reading list for evidence.) And indeed Harris did — the books he recommended on the show, however outstanding, were all by men.

What Will Get You Hired Isn't on Your Resume It’s the holiday season, and millions of people are about to get a flood of unsolicited career advice from older relatives. Most of it will be useless. You don’t need to be told that a resume should be clear, uncluttered, and typo free. (A good summary of common, deal-breaking mistakes comes from Google HR head Laszlo Bock.) But don’t obsess over format and wording, which have rapidly diminishing returns. Primavera de Filippi on Blockchain and the Quest to Decentralize Society "I went into the blockchain and I never left." Harvard researcher Primavera De Filippi is perhaps most well-known for blockchain ideas that sound as if they come straight out of a sci-fi novel. Case in point, De Filippi presented a robotic flower that lives and reproduces via bitcoin micropayments at a conference earlier this year.

How to Get the Rich to Share the Marbles Suppose scientists discovered a clump of neurons in the brain that, when stimulated, turned people into egalitarians. This would be good news for Democratic strategists and speechwriters, who could now get to work framing arguments about wealth and taxation in ways that might activate the relevant section of cerebral cortex. This “share-the-spoils” button has been discovered, in a sense, but it may turn out to be harder to press than Democrats might think. Pretend you’re a three-year-old, exploring an exciting new room full of toys. You and another child come up to a large machine that has some marbles inside, which you can see. There’s a rope running through the machine and the two ends of the rope hang out of the front, five feet apart.

The Significance of Mauni Amavasya - Silence is the Way January 27, 2017 is Mauni Amavasya, the last Amavasya before Mahashivratri. Sadhguru looks at the significance of silence and the importance of this period in the year. Read in Hindi: मौनी अमावस्या Sadhguru: The existence that one is able to see, hear, smell, taste, and touch through the five senses is essentially a product of reverberations, a play of sound or nada. The body and mind of a human being are also reverberations. But body and mind are not an end in themselves – they are just the outer peel of a possibility. Secrets Of Excellent Conversationalists The solution to the age-old problem of understanding others may be as simple as taking the time to improve your active listening skills. Active listening is all about building rapport, understanding and trust. Your “likability” factor is largely determined by your ability to effectively listen to client and customer suggestions and successfully respond to their needs, requests and concerns.