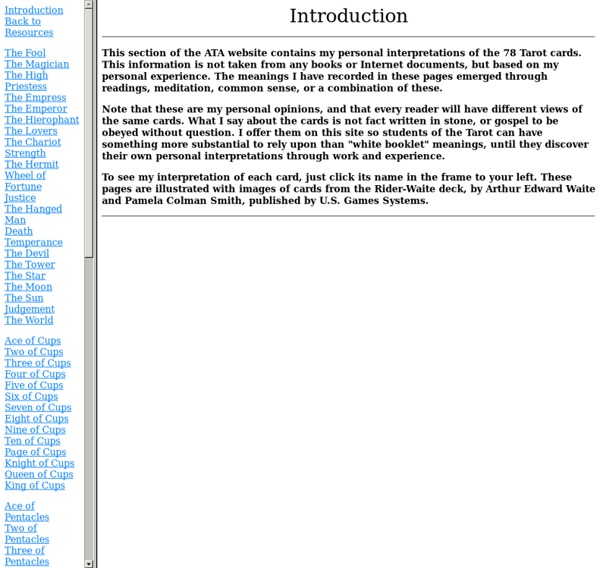 Tarot Card Meanings for Money and Prosperity You love tarot. I know you do. But learning it is hard, and all those lovely tarot books are so expensive. Sometimes all you want is to draw a card and have an instant answer. Especially when it comes to making decisions about money and finances. You’re short of cash, what can you do? As always, never base any decision, financial or otherwise, on the turn of a card. With that said, grab your cards, formulate your question, shuffle, and draw a single card. Weird Free Tarot Reading Tip If you haven't got a tarot deck, and you are reading this on a touch-screen device, try closing your eyes, asking a question, and moving the screen. Whichever card in the list you landed on is your answer. Any Questions on Tarot Cards and Money? If you have any questions regarding the cards and your financial outlook, please ask in the comments section below. The tarot deck used for illustrating this article is the very lovely recoloured Universal Waite Tarot Deck.

Tarot Malin | La Magie est en Vous, le Tarot la révèle! project me The time has come for me to start taking control of my life again and make some changes. I'm starting small. This week I'm committed to doing a 7-day green juice challenge that I saw over at Food Matters. I won't be changing my eating habits at this time, apart from adding one green juice a day to my diet. This juice is cabbage, lettuce, spinach, one Granny Smith apple, half a small lemon, and a bit of ginger. And since this is a tarot journal, I figured I'd draw a card everyday as a sort of affirmation. Tarot Card Meanings Today's Tarot deck has fixed upon the 78 card standard that was popular in Northern Italy during the 16th century. The cards of the Major Arcana usually represent significant issues in the life of the Querent. They are key principles core to human life, such as life and death, ethical dilemmas, spirituality, and interaction with other people. One can view the Major Arcana as spiritual chart that the Querent can use to plot their course as they make their journey through life and beyond. The Minor Arcana often deal with the mundane and superficial, and how the Querent reacts to them. However, when doing a reading the distinctions between Minor and Major often blur, as the cards interact with each other and paint a seamless picture of the Querent's life and influences. The following Tarot card meanings are the interpretations I have been using for decades, evolving from years of experience and study. Major Arcana Card Meanings Minor Arcana Tarot Meanings The Suit of Cups The Suit of Swords

Arcanae Mirror Tarot for Beginners Part 6 - Busting Tarot Misconceptions and Absolute Bullshit - Ethony 27 Mar Tarot for Beginners Part 6 – Busting Tarot Misconceptions and Absolute Bullshit Posted at 07:46h in Tarot by Ethony Hi Tarot Tribe, it’s Ethony and today I am here with the final installment of my Tarot for Beginners series – Busting 15 Tarot Misconceptions and Absolute Bullshit. Things are about to get a whole lotta juicy up in here. I am going to try and limit my cursing in the video but I can’t promise it, these things get me pretty really to slap someone verbally like only a Queen of Swords can. In case you missed the first five parts of the series: Before I begin, as with everything I share, take what resonates with you and simply leave the rest. Let’s face it, there is a lot of information out there in the wonderful intertubes and everyone and their pet goldfish named Jaws has an opinion. I would like to thank the amazing community members on our Tarot Readers Academy Facebook Group for their input in collating this list of 15 Tarot Misconceptions (and B.S) Beliefs die hard. Nope.

Tarot & candles – Thoughts and journey with the cards