Crackle- Watch Movies Online. Free downloads. 21 Podcasts For Every Personality. 4 strategies for getting manufacturer coupons. Manufacturer coupons are amazing because everyone from chain stores to local grocers accept them. 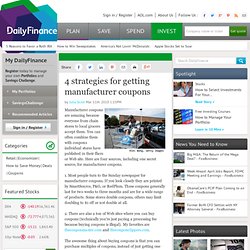 You can often combine them with coupons individual stores have published in their fliers or Web site. Here are four sources, including one secret source, for manufacturer coupons. 1. Most people turn to the Sunday newspaper for manufacturer coupons. If you look closely they are printed by SmartSource, P&G, or RedPlum. 2. The awesome thing about buying coupons is that you can purchase multiples of coupons, instead of just getting one from the newspaper (or two if you subscribe to multiple papers). The drawbacks of buying coupons online are that you have to watch expiration dates carefully because it takes about a week for your coupons to arrive. 3. Here is a huge list of manufacturer Web sites and phone numbers, courtesy of a blog called GroceryCouponGuide. 4. The Truth About Barbie. 50 Years of Barbie on Behance. Malibu Barbie.

Who Lived in Your House in 1940? Here’s a splendid diversion if you’re a data nerd, a history buff, or even just like good detective work: Tell the story of the family that lived in your house in 1940. 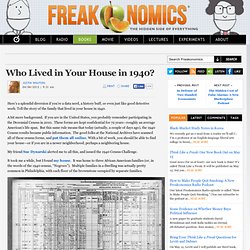 A bit more background. If you are in the United States, you probably remember participating in the Decennial Census in 2010. These forms are kept confidential for 72 years—roughly an average American’s life span. But this same rule means that today (actually, a couple of days ago), the 1940 Census results became public information.

The good folks at the National Archives have scanned all of these census forms, and put them all online. My friend Sue Dynarski alerted me to all this, and issued the 1940 Census Challenge. It took me a while, but I found my house. The three families provide an interesting snapshot of Depression-era Philadelphia. First, the Chisom’s, who had moved to Philadelphia from Blackville, South Carolina. Second, were Paul and Lillian Evans (age 33 and 32), who were also from Blackville. Nancy Walthour/Shearer Family (1806-1890)

Watch TV Shows and Series Online for Free! Twenty Amazing Close Calls Caught on Camera. Heath Ledger morphs into the Joker. Top 10 Ways to Save Money in a Recession. @lordgarion51470: I'm on a great T-Mobile plan that's not really advertised. 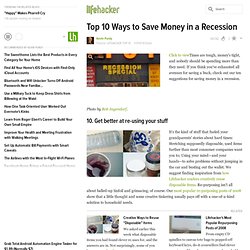 Note: Chicago market, so YMMV Check your local T-Mobile office to see if this plan is offered in your area. My plan is 3000 anytime minutes plus the unlimited text option for $65/mo all in. Now, it's only a local plan, and my "home area" is the greater Chicago area, but for me (and maybe for others) it's the perfect plan. Pros: -3000 anytime minutes -Unlimited text -Unlimited email via MMS (my phone has another email option though I've never set it up.) -IM on my phone (though I've never used it-I use Jott/Dial2Do) -Free wireless internet (not a data plan) anywhere there is an open connection (with my Windows Mobile Phone) 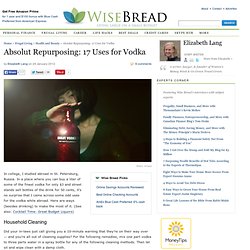 Petersburg, Russia. In a place where you can buy a liter of some of the finest vodka for only $3 and street stands sell bottles of the drink for 50 cents, it's no surprise that I came across some odd uses for the vodka while abroad. Listen to Music Samples, Remixes and Cover Songs. Riusuke Fukahori Paints Three-Dimensional Goldfish Embedded in Layers of Resin. First: watch the video. 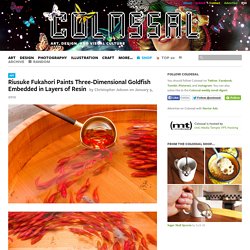 Japanese artist Riusuke Fukahori paints three-dimensional goldfish using a complex process of poured resin. The fish are painted meticulously, layer by layer, the sandwiched slices revealing slightly more about each creature, similar to the function of a 3D printer. I really enjoy the rich depth of the pieces and the optical illusion aspect, it’s such an odd process that results in something that’s both a painting and sculptural. Wonderful. 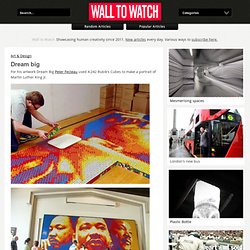 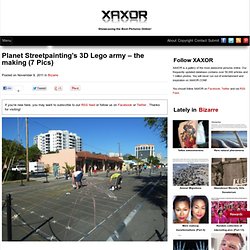 Thanks for visiting! Rate this Post. Dr. Seuss would and could take over Arkham Asylum. Rubiks Battenburg Cake. HowStuffWorks - Learn How Everything Works! Playful three are best friends. By DAILY MAIL REPORTER Rare sighting: An endangered De Brazza's monkey plays with one of the two Jack Russell Terriers at Barnley's Guesthouse in Kitale, Kenya It was a moment of horror for wildlife photographers Vicki and Adam Scott Kennedy as they witnessed a rare De Brazza's monkey being 'attacked' by two Jack Russell terriers in Kenya. 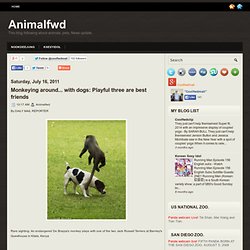 But that horror soon turned to joy as they realised that, in fact, the animals were only playing and the couple were witnessing a unique spectacle. For no sooner had the two dogs released the monkey from their grip, than the monkey turned the tables and chased them around the gardens of Barnley's Guesthouse near Kitale in northwest Kenya. Surprise: The Kennedys had heard that a lone De Brazza's Monkey, an endangered species in Kenya, had been seen occasionally in and around the gardens of the guesthouse A tennis ball seemed to be the hub of the commotion and the monkey was seen stealing it from the dogs and running away with it. source: dailymail. Bowl of shells. 12 Ways To Achieve The Very Best Glamour Shot.