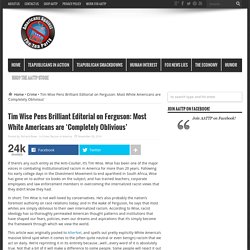 Wise has been one of the major voices in combating institutionalized racism in America for more than 20 years. Following his early college days in the Divestment Movement to end apartheid in South Africa, Wise has gone on to author six books on the subject, and has trained teachers, corporate employees and law enforcement members in overcoming the internalized racist views that they didn’t know they had.

Some witnesses lied to Michael Brown grand jury, McCulloch says. So why have them testify? Photos And Videos: America Responds To #Ferguson. 'Hands Up Don't Shoot': This Video Of #Ferguson Protestors At SCOTUS Last Night Is Amazing. Majority Of Americans Say Officer Wilson Should Face Charges–But That's Where Agreement Ends. Are Ferguson and Eric Garner's Death Symptoms of a Deeper Problem? I sat down last week to write about what happened in Ferguson. 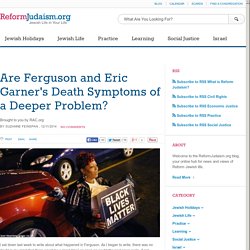 As I began to write, there was no doubt in my mind that there would be a “next time” as soon as we hit the next news cycle, if not sooner. Then I heard the news that the New York City police officer responsible for the death of Eric Garner would not be charged. The language of protest: Race, rioting, and the memory of Ferguson — Constitution Daily. My Son Is Black. With Autism. And I’m Scared Of What The Police Will Do To Him. — Human Parts. An Elegy for Michael Brown. I'm an educator. 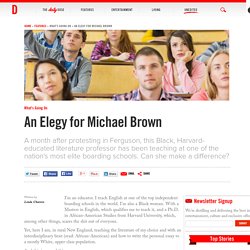 I teach English at one of the top independent boarding schools in the world. I'm also a Black woman. With a Masters in English, which qualifies me to teach it, and a Ph.D. in African-American Studies from Harvard University, which, among other things, scares the shit out of everyone. Yet, here I am, in rural New England, teaching the literature of my choice and with an interdisciplinary bent (read: African-American) and how to write the personal essay to a mostly White, upper-class population. And this is a good thing. UN Condemns U.S. Police Brutality, Calls For 'Stand Your Ground' Review. Michael Brown's Mother: 'They Still Don't Care. This Is What Darren Wilson Told the Grand Jury About Shooting Michael Brown. Source: Darren Wilson says Michael Brown kept charging at him. FERGUSON • Police Officer Darren Wilson told investigators that in a struggle for his pistol inside a police SUV, Michael Brown pressed the barrel of Wilson’s gun against the officer’s hip, according to a source with knowledge of his statements.... 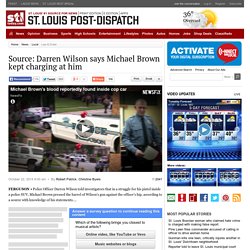 How many police shootings a year? No one knows. People march in Washington on Sept. 6 to protest the killing of Michael Brown. 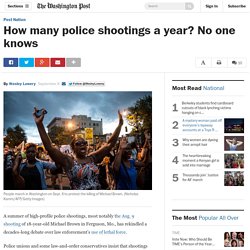 (Nicholas Kamm/AFP/Getty Images) A summer of high-profile police shootings, most notably the Aug. 9 shooting of 18-year-old Michael Brown in Ferguson, Mo., has rekindled a decades-long debate over law enforcement’s use of lethal force. Police unions and some law-and-order conservatives insist that shootings by officers are rare and even more rarely unjustified. Civil rights groups and some on the left have just as quickly prescribed racial motives to the shootings, declaring that black and brown men are being “executed” by officers. Deadly Force, in Black and White. Young black males in recent years were at a far greater risk of being shot dead by police than their white counterparts – 21 times greater i, according to a ProPublica analysis of federally collected data on fatal police shootings. 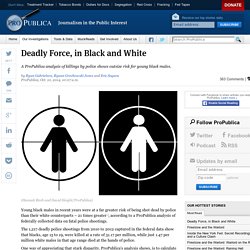 The 1,217 deadly police shootings from 2010 to 2012 captured in the federal data show that blacks, age 15 to 19, were killed at a rate of 31.17 per million, while just 1.47 per million white males in that age range died at the hands of police. One way of appreciating that stark disparity, ProPublica's analysis shows, is to calculate how many more whites over those three years would have had to have been killed for them to have been at equal risk.

The number is jarring – 185, more than one per week. Congress Just Passed a Bill Addressing Police Killings While No One Was Looking. After watching nationwide protests unfold against police brutality, members of Congress did what they have seemed incapable of doing for years: something. 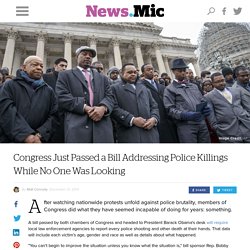 A bill passed by both chambers of Congress and headed to President Barack Obama's desk will require local law enforcement agencies to report every police shooting and other death at their hands. That data will include each victim's age, gender and race as well as details about what happened. Officer Darren Wilson's story is unbelievable. Literally. We've finally heard from Officer Darren Wilson. 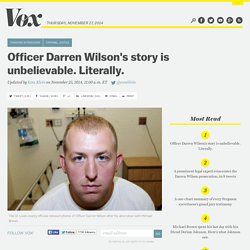 Wilson had been publicly silent since the events of August 9, when he shot and killed 18-year-old Michael Brown in Ferguson, Missouri. And, even as the grand jury announced its decision not to indict him, he remained silent. He had his attorneys release a statement on his behalf. But on Monday night, St. Louis County prosecutor Robert McCulloch released the evidence given to the grand jury, including the interview police did with Wilson in the immediate aftermath of the shooting. Grand Jury Documents *** Gannett ***

Subject Specialists. The rarity of a federal grand jury not indicting, visualized.