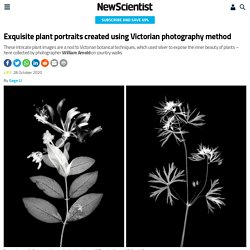 Benjamin H. D. Buchloh on the art of Luciano Perna. A rigorous morality results from complicity in the knowledge of evil, which is the basis of intense communication. 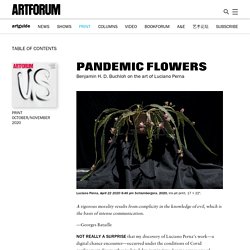 A hand-coloured photograph of the letter ‘L’ formed from the Linnaea borealis, created by Emma Schenson in 1864 to commemorate botanist &amp; ‘father’ of taxonomy Carl Linnaeus - using his fav. flower. □ (Linnaeus would initial ‘L’ after plants that he wa. Unearthed: Photography's Roots. Stunning. 25 Photos of Madeira's Dreamy Fanal Forest by Albert Dros. The island of Madeira is known for its dramatic landscape, which includes rugged mountains, volcanoes, and rocky beaches. 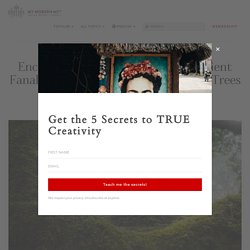 But one of Madeira’s most unique treasures is an ancient forest where every step takes you inside a scene ripped from a fairy tale. Known for its enchanting morning fog, the Fanal forest is part of an ancient laurel forest. Thanks to incredible images by photographer Albert Dros, we’re transported into this dreamy landscape. Fanal is part of the Laurisilva forest, a UNESCO World Heritage Site known for its beauty and ecological importance.

Incredibly, 15 to 40 million years ago, much of Southern Europe was covered in this type of laurel forest. Dornith Doherty: Elegance of Apocalyptic Seed Vaults. Nature photographers often zip on warm coats before lugging their cameras into the wintry outdoors. 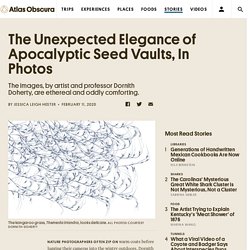 Dornith Doherty, an artist and professor at the University of North Texas, bundles up to photograph nature indoors—and sometimes in suspended animation. Doherty documents the vaults and research hubs that store seeds for any number of uncertain futures. SPOTLIGHT: The Art of MRI - SCIART MAGAZINE. By Ashley P. 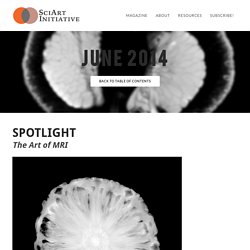 Taylor, Managing Editor​Andy Ellison never thought of himself as an artist until people started calling him one. Ellison runs the Magnetic Resonance Imaging (MRI) machine at Boston University School of Medicine’s Center for Biomedical Imaging, which is used for research studies about how the brain works. MRI machines create images of soft tissue based on the way molecules respond to applied magnetic fields. Around the World in Rare and Beautiful Apples. Inside a bright Brooklyn gallery that is plastered in photographs of apples, William Mullan is being besieged with questions. 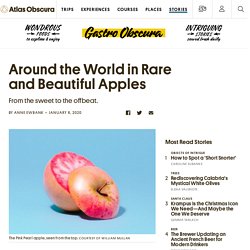 A writer is researching apples for his novel set in post-World War II New York. An employee of a fruit-delivery company, who covetously eyes the round table on which Mullan has artfully arranged apples, asks where to buy his artwork. But these aren’t your Granny Smith’s apples. A handful of Knobbed Russets slumping on the table resemble rotting masses. Despite their brown, wrinkly folds, they’re ripe, with clean white interiors. Mullan, whose day job is as a brand manager for Raaka Chocolate, can rhapsodize about apples at length. Pictures: Flowers Glow Under UV-Induced Visible Fluorescence. Great Last Minute Gifts- Give a Subscription to National Geographic Ultraviolet light reveals alien-like colors and fairy sparkles in seemingly normal plants. 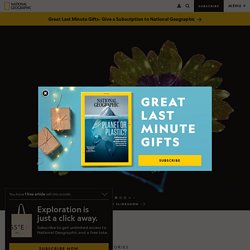 Photographs by Craig P. Burrows PUBLISHED February 23, 2018. Flowers in Ultra-Violet. The compilation of species will continue to be updated at irregular intervals. 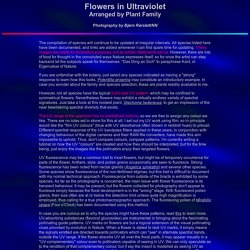 All species listed here have been documented, and links are added whenever I can find spare time for updating. These images are made for illustrative purposes, not as artistic statements per se. However, there are lots of food for thought in the convoluted ways Nature expresses itself, so for once the artist can step backand let the subjects speak for themselves. "Das Ding an Sich" to paraphrase Kant, or Eigenvalue of Nature.

If you are unfamiliar with the botany, just select any species indicated as having a "strong" response to learn how this looks. Karl Blossfeldt’s Urformen der Kunst (1928) At the grand old age of 63, just four years before his death, Karl Blossfeldt produced his first photography book, the internationally best-selling Urformen der Kunst (later translated into English as Art Forms in Plants). 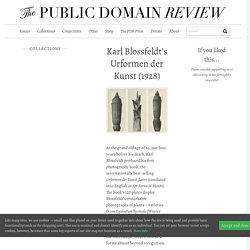 The book’s 120 plates display Blossfeldt’s remarkable photographs of plants – varieties from Equisetum hyemale (Winter Horsetail) to Tellima grandiflora (Fringe cups) — all captured in extraordinary detail, as if under the microscope, frozen into new forms almost beyond recognition. Born in 1865 in Germany’s Harz Mountains, Karl Blossfeldt lived a childhood in the open air. As a teenager he became an apprentice in a foundry making wrought iron grilles and gates, objects decorated with plant-motifs, before then moving to Berlin to study at the School of the Museum of Decorative Arts.

Plants are a treasure trove of forms — one which is carelessly overlooked only because the scale of shapes fails to catch the eye and sometimes this makes the forms hard to identify. Botanical life in close-up – in pictures. Collection: Liverwort plant images. Want to learn more about gametophyte fern photography? — CambPlants Hub. If you are interested in fern gametophytes or in deep focus macrophotography, the new Chlorohpyllosophy Youtube channel has just been launched giving guidance on how to start in this fascinating area. 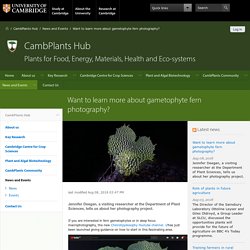 The images are a combination of cool photography and science know-how. Burrows records the fluorescence of plants, when they emit light that is normally invisible to the naked eye. Burrows uses ultraviolet-induced visible fluorescence (UVIVF) photography to capture the ethereal glow. The centers of this purple alyssum look like tiny glowing lights. Burrows discovered the photographic technique online several years ago. Craig Burrows: Photos Capture the Light That Plants Emit. The plants in Craig Burrows’ photos look like something plucked from an alien planet, sprouting wild shades of violet, pink and green. But the plants, and the colors are real. It’s the result of a cool trick of nature. All plants reflect light. Leaves reflect green, and flowers reflect red, or yellow, or whatever. But plants also fluoresce, which means when they reflect ultraviolet light, they emit longer wavelengths visible to the human eye.

Davidson: A Quest to Document the World’s Flowering Plants. Dornith Doherty. California botanical art of J.W. Fike. For his recent series of botanical photographs, Phoenix artist Jimmy Fike often foraged in alleys, ditches and empty lots to find his specimens — all edible. “I’m really trying to find the balance between scientific imaging and something more mystical, like a vision a shaman would have about what plant is edible or medicinal,” Fike said.

After a scavenging run, Fike brings specimens back to his studio and pins them on a white backdrop, meticulously arranging the plant to showcase distinct features such as a delicate flower, interesting leaf or unusual root. Once the specimen is photographed, the Photoshopping begins. Fike may digitally illustrate an image over the course of three or four months. Edible parts are rendered in color. Steve Harries: Botanical Polaroids. Laurence Hill: Fritillaria Icones. Fritillaria Icones - News 2017. These six non-Linnaean composite images compare related characters across a genus; where as the convention is to group different characters of a single species. A Linnaean image maximizes taxonomically important information within the space limitation of a scientific journal or monograph. The Internet has removed the limit on space and through Search has created the option to bring together images of individual characters to compare across different species and genera.

The inspiration for these non-Linnaean composites is a vision of a fully searchable botanical image bank capable of producing custom composite images specific to individual users requests. The square format and geometric structure also breaks with tradition. This also acknowledges trends in social media and the use of smart phone apps to engage the public in Citizen Science projects. Fritillaria Icones - News 2014. Fritillaria Icones - News 2018. SPECIES BOUNDARIES: Fritillaria affinis The North American Fritillaria affinis shows great variability across its geographic distribution. To highlight this taxonomic complexity, six portraits show examples from Oregon and Northern California. Fritillaria affinis can appear locally distinct and several sub-populations have been named, although later reduced to synonym.

Specific character combinations are frequently found in geographically disjunctive sub-populations and many characters appear polymorphic at particular locations. This natural variation in wild species strongly contrast the everyday horticultural experience of more uniformed plants. 18 minutes to digitally repair 16x28mm section of Fritillaria raddeana after layer-stacking 15 images… Scanner Photography By Ellen Hoverkamp. Brian Johnston. Megan Jones: contemporary photography – ferns. Contemporary photography – ferns 1 Posted on Updated on My name is Megan Jones I’m a university student studying contemporary photography. My current project was inspired by the Herbarium section at the museum I was lucky enough to go behind the scenes looking at the huge collections they have stored there. Herbarium Amazonas: Christoph Keller. Rob Kesseler. Exhibition of Rob Kesseler. An expert on the flora of #Vermont, Elsie May Kittredge was born this day in 1870. She photographed for @BrooklynBotanic and as assistant curator at @NYBG founded a herbarium together with Elizabeth Billings, which has been housed @WoodstockCares, @Dartmo.

Niki Simpson digital flora. Niki Simpson. Digital botanical illustration recognized by The Linnean Society of London. May 30, 2018 by Tania Marien Each year The Linnean Society of London issues the Jill Smythies Award to a botanical artist for outstanding illustrations. Honour Stewart. Honour Hiers Stewart's plant connections. I am a large format film photographer combining the use of 4×5″ transparency film with botanical specimen.