Geog resources 2017. Se connecter à Facebook. Snapshot - Geography - Snapshot - History - Geography. Just Updated Resources For Teaching Latitude & Longitude. The Earthquake That Will Devastate Seattle. When the 2011 earthquake and tsunami struck Tohoku, Japan, Chris Goldfinger was two hundred miles away, in the city of Kashiwa, at an international meeting on seismology.

As the shaking started, everyone in the room began to laugh. Earthquakes are common in Japan—that one was the third of the week—and the participants were, after all, at a seismology conference. Then everyone in the room checked the time. Seismologists know that how long an earthquake lasts is a decent proxy for its magnitude. The 1989 earthquake in Loma Prieta, California, which killed sixty-three people and caused six billion dollars’ worth of damage, lasted about fifteen seconds and had a magnitude of 6.9. When Goldfinger looked at his watch, it was quarter to three. It was March. Oceans warming. Megacities, 2017 booklet, answers. LGeog ist of Learning Activities. Guess That City with Macro.

PBL Changing Places and How to Create a VR Tour. Geography Topic 2 Human Wellbeing. GeogSpace. The science of slums. In an edited extract from his new book, Danny Dorling argues that the idea of the population bomb is a fallacy and that the human population is checking its rise without the need for a grand plan The ‘population bomb’ is a solecism, a grammatical mistake, an absurdity. 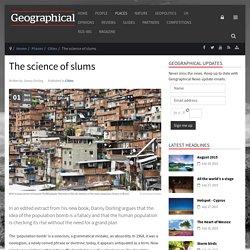 In 1968, it was a neologism, a newly coined phrase or doctrine; today, it appears antiquated as a term. Now simply ‘population’ without the suffix ‘bomb’ has a self-evident power. We should be ‘concerned about population’, we’re told – no longer scared out of our wits, as any sane person would be about a bomb, but concerned. We became scared. Was this due to cataclysmic growth? A simple observer who just looked at the totals would conclude that if human population growth were to continue at the pre-millennial rate of acceleration, then by 2050, there would be 13 billion of us; by 2100, 44 billion; by 2200, some 1,775 billion and by 2300, some 133,592 billion.

Before the 1990s, doom-mongering was normal. Like Minecraft? Try these 7 engaging world builders, too. Eco, Oort Online, and a host of virtual worlds to keep students busy, and learning With the popular explosion of Minecraft among middle schoolers and beyond, it’s worth noting that it isn’t the only open world virtual environment with educational value. 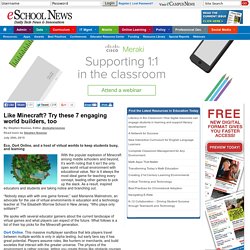 Nor is it always the most ideal game for teaching every concept, leading other games to pick up the slack. As a result, inspired educators and students are taking notice and branching out. “Nobody stays with with one game forever,” said Marianne Malmstrom, an advocate for the use of virtual environments in education and a technology teacher at The Elisabeth Morrow School in New Jersey.

“Who plays only solitaire?” We spoke with several educator gamers about the current landscape of virtual games and what players can expect of the future. Oort Online. Next page: A virtual world that teaches sustainability. Using Geography Education. Ring of Fire. The Ring of Fire is a string of volcanoes and sites of seismic activity, or earthquakes, around the edges of the Pacific Ocean. 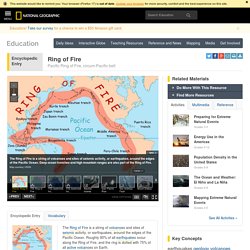 Roughly 90% of all earthquakes occur along the Ring of Fire, and the ring is dotted with 75% of all active volcanoes on Earth. The Ring of Fire isn’t quite a circular ring. It is shaped more like a 40,000-kilometer (25,000-mile) horseshoe. Geography Topic 2 Human Wellbeing pptx. Minecraft Geography Lesson. Living Geography: Minecraft in Geography - your suggestions welcome... 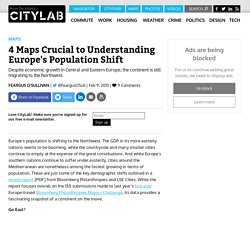 Europe’s population is shifting to the Northwest. The GDP in its more easterly nations seems to be booming, while the countryside and many smaller cities continue to empty at the expense of the great conurbations. And while Europe’s southern nations continue to suffer under austerity, cities around the Mediterranean are nonetheless among the fastest growing in terms of population. These are just some of the key demographic shifts outlined in a recent report [PDF] from Bloomberg Philanthropies and LSE Cities. While the report focuses overall on the 155 submissions made to last year’s first ever Europe-based Bloomberg Philanthropies Mayors Challenge, its data provides a fascinating snapshot of a continent on the move. Go East? While they’re often depicted as the continent’s poor relations, it’s actually the states of Central and Eastern Europe where per capita GDP has grown fastest.

Defining Geography: What is Where, Why There, and <br />Why Care? The Nature of Geography Most everyone knows that history is the study of events through time. 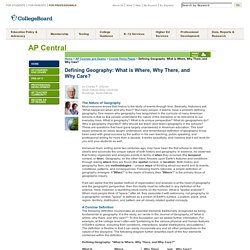 Basically, historians ask "What happened when and why then? " But many people, it seems, have a problem defining geography. One reason why geography has languished in the curricula of many American schools is that so few people understand the nature of the discipline or its relevance to our everyday lives. What is geography?

What is its unique perspective?