A collection of all things related to brain....
For example, nerve cells and neuroscience 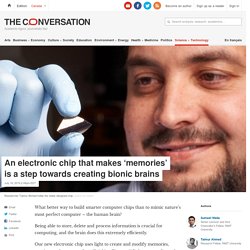 Being able to store, delete and process information is crucial for computing, and the brain does this extremely efficiently. Our new electronic chip uses light to create and modify memories, moving us closer towards artificial intelligence (AI) that can replicate the human brain’s sophistication. To develop this, we drew inspiration from a new technique called optogenetics, to develop a device that replicates the way the brain stores (and loses) information. Optogenetics involves using light to control cells in living tissue, typically nerve cells (neurons). The Brain Needs Animal Fat. Source: nexusplexus / 123RF Stock Photo When you think of animal fat, what comes to mind? 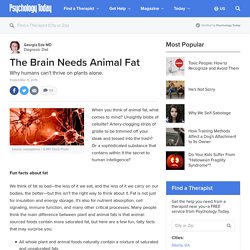 Unsightly blobs of cellulite? Artery-clogging strips of gristle to be trimmed off your steak and tossed into the trash? Or a sophisticated substance that contains within it the secret to human intelligence? Fun facts about fat. Being forgetful is actually a sign you are unusually intelligent, according to scientific research. China’s CRISPR twins might have had their brains inadvertently enhanced. The brains of two genetically edited girls born in China last year may have been changed in ways that enhance cognition and memory, scientists say. 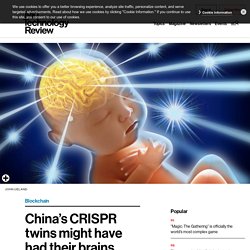 The twins, called Lulu and Nana, reportedly had their genes modified before birth by a Chinese scientific team using the new editing tool CRISPR. The goal was to make the girls immune to infection by HIV, the virus that causes AIDS. Now, new research shows that the same alteration introduced into the girls’ DNA, deletion of a gene called CCR5, not only makes mice smarter but also improves human brain recovery after stroke, and could be linked to greater success in school. “The answer is likely yes, it did affect their brains,” says Alcino J. Silva, a neurobiologist at the University of California, Los Angeles, whose lab uncovered a major new role for the CCR5 gene in memory and the brain’s ability to form new connections. Growth Mindset Parenting. How babies learn – and why robots can’t compete. Deb Roy and Rupal Patel pulled into their driveway on a fine July day in 2005 with the beaming smiles and sleep-deprived glow common to all first-time parents. 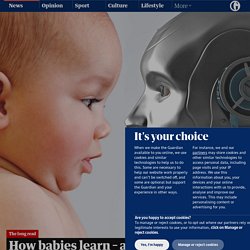 Pausing in the hallway of their Boston home for Grandpa to snap a photo, they chattered happily over the precious newborn son swaddled between them. This normal-looking suburban couple weren’t exactly like other parents. Roy was an AI and robotics expert at MIT, Patel an eminent speech and language specialist at nearby Northeastern University. Genetics, big data science, and postgenomic education research. Ben Williamson A diagram visualizing the genetic variants associated with educational attainment. 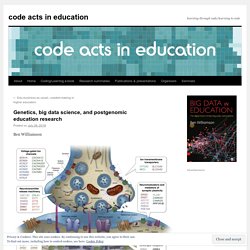 Image by Emily Willoughby. An international consortium of genetics researchers has established a link between genes and educational attainment from a study of over a million people. Science fiction enthusiasts have a positive attitude to the digitizing of the brain. Smarter brains run on sparsely connected neurons. Neuroscientists train a deep neural network to process sounds like humans do. How Kids Learn Better By Taking Frequent Breaks Throughout The Day. Excerpted from Teach Like Finland: 33 Simple Strategies For Joyful Classrooms (c) 2017 by Timothy D. 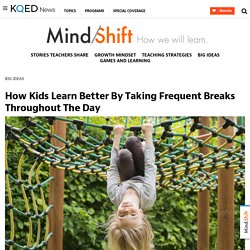 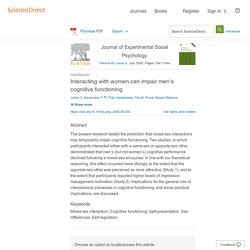 -- react-text: 58 -->JavaScript is disabled on your browser. Please enable JavaScript to use all the features on this page. <! -- /react-text --></div></div> Contact with attractive women affects the release of cortisol in men. How does consciousness happen? Anil Seth speaks at TED2017. “We don’t just passively perceive the world; we actively generate it,” says cognitive scientist Anil Seth. 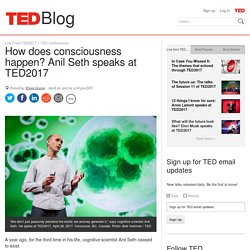 He spoke at TED2017, April 26, 2017, Vancouver, BC, Canada. Photo: Bret Hartman / TED A year ago, for the third time in his life, cognitive scientist Anil Seth ceased to exist. He was having an operation, his brain filling with anesthetic, and he was feeling a sense of detachment, falling apart and coldness. What Children Can Teach Us About Paying Attention. Thinking like a five-year-old can help you learn more in a new environment. 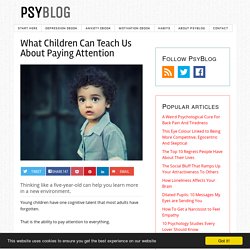 Young children have one cognitive talent that most adults have forgotten. That is the ability to pay attention to everything. As adults we learn to focus our attention and block out distractions. But, sometimes being distracted means noticing and learning more. Professor Vladimir Sloutsky, study co-author, explained: Researchers Crack the Brain's Facial-Recognition Code. Our brains have evolved to recognize and remember faces. 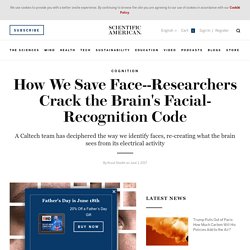 As infants, one of the first things we learn is to look at the faces of those around us, respond to eye contact and mimic facial expressions. As adults, this translates to an ability to recognize human faces better and faster than other visual stimuli. We’re able to instantly identify a friend’s face among dozens in a crowded restaurant or on a city street. First hint of 'life after death' in biggest ever scientific study. Scientists have discovered how to 'delete' unwanted memories. Men lose their minds speaking to pretty women.

Psychologists at Radboud University in The Netherlands carried out the study after one of them was so struck on impressing an attractive woman he had never met before, that he could not remember his address when she asked him where he lived. Researchers said it was as if he was so keen to make an impression he 'temporarily absorbed most of his cognitive resources.' To see if other men were affected in the same way, they recruited 40 male heterosexual students. Each one performed a standard memory test where they had to observe a stream of letters and say, as fast as possible, if each one was the same as the one before last. The volunteers then spent seven minutes chatting to male or female members of the research team before repeating the test. The results showed men were slower and less accurate after trying to impress the women. Alpha, Beta, Theta Brainwaves - Understanding Our Brain. Magnets Can Improve Your Memory. Magnets could eventually be used to compensate for memory problems caused by dementia.

Scientist have used magnetic stimulation to improve people’s memory, new research reports. Transcranial magnetic stimulation, or TMS, helped people remember things they had heard more accurately. The magnetic stimulation worked when it matched the natural theta waves of the brain. Dr Sylvain Baillet, one of the study’s authors, explained: Your brain is unique – here's how it could be used as the ultimate security password. Biometrics – technology that can recognise individuals based on physical and behavioural traits such as their faces, voices or fingerprints – are becoming increasingly important to combat financial fraud and security threats.

This is because traditional approaches, such as those based on PIN numbers or passwords, are proving too easily compromised. For example, Barclays has introduced TouchID, whereby customers can log onto internet banking using fingerprint scanners on mobile phones. The Power of Overlearning. When you want to learn something new, you practice. Once you get the hang of it, you can hopefully do what you learned—whether it’s parallel parking or standing backflips—on the next day, and the next. If not, you fall back to stage one and practice some more. But your brain may have a shortcut that helps you lock in learning. Instead of practicing until you’re decent at something and then taking a siesta, practicing just a little longer could be the fast track to solidifying a skill. How Thinking Works: 10 Brilliant Cognitive Psychology Studies Everyone Should Know. How experts think, the power of framing, the miracle of attention, the weird world of cognitive biases and more… Fifty years ago there was a revolution in psychology which changed the way we think about the mind.

The ‘cognitive revolution’ inspired psychologists to start thinking of the mind as a kind of organic computer, rather than as an impenetrable black box which would never be understood. This metaphor has motivated psychologists to investigate the software central to our everyday functioning, opening the way to insights into how we think, reason, learn, remember and produce language. Here are 10 classic cognitive psychology studies that have helped reveal how thinking works. Brain Plasticity: How Adult Born Neurons Get Wired – Neuroscience News. Summary: Researchers report adult neurogenesis not only helps increase the number of cells in a neural network, it also promotes plasticity in the existing network. Additionally, they have identified the role the Bax gene plays in synaptic pruning. Source: University of Alabama at Birmingham. One goal in neurobiology is to understand how the flow of electrical signals through brain circuits gives rise to perception, action, thought, learning and memories.

7 Signs of Intelligence That Suggest You Are Smarter Than Average. Surprising signs of intelligence include a tendency towards mental illness, being prone to worry, sleeping late and more… The Best Sleep Position For Clearing The Brain of Waste. Some People's Brains Are Wired for Languages. Babies' ability to soak up language makes them the envy of adult learners everywhere.

Sending Text Messages On Your Smartphone Changes The Rhythm Of Your Brain Waves. Researchers think they know how to make your brain learn like a kid again. Here Is What The Internet Is Doing To Human Memory. More ammunition for those claiming that the internet is making us stupid. Using the internet to look up facts makes us more reliant on it in the future, new research finds. The more times people look up facts online, the less they prefer to rely on their own memories for even the simplest questions. Sex differences in neural and behavioral signatures of cooperation revealed by fNIRS hyperscanning : Scientific Reports. Differences in male, female brain activity found when it comes to cooperation. Studies have long shown that when faced with a problem that must be solved by cooperating with others, males and females approach the task differently. Now, researchers at the Stanford University School of Medicine have discovered how those differences are reflected in brain activity.

When the researchers asked people to cooperate with a partner and then tracked the brain activity of both participants, they found that males and females had different patterns of brain activity. The new findings, to be published online June 8 in Scientific Reports, could offer some clues into how cooperative behavior may have evolved differently between males and females, and could eventually help researchers develop new ways to enhance cooperative behavior. Early brain connections key to reading: Pathways that exist before kids learn to read may determine development of brain's word recognition area. A new study from MIT reveals that a brain region dedicated to reading has connections for that skill even before children learn to read. By scanning the brains of children before and after they learned to read, the researchers found that they could predict the precise location where each child's visual word form area (VWFA) would develop, based on the connections of that region to other parts of the brain.

Neuroscientists have long wondered why the brain has a region exclusively dedicated to reading -- a skill that is unique to humans and only developed about 5,400 years ago, which is not enough time for evolution to have reshaped the brain for that specific task. The new study suggests that the VWFA, located in an area that receives visual input, has pre-existing connections to brain regions associated with language processing, making it ideally suited to become devoted to reading. Saygin is the lead author of the study, which appears in the Aug. 8 issue of Nature Neuroscience.