'Thatcher gene' is key to needing less sleep. Scientists at Centre for Applied Genomics in Philadelphia, US, discovered that people carrying the gene variant ‘p.Tyr362His’ were able to function on fewer than five hours of sleep per night. 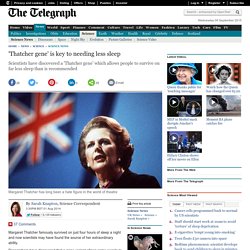 The researchers studied 100 sets of twins to find out which genetic variants were responsible for changes in sleep patterns. The study revealed that those with the variant chose to sleep for less time than those without it, and were also far better at mental tasks after being deprived of sleep for 38 hours. One twin with the gene mutation had 40 percent fewer lapses of performance during 38 hours without sleep and required less recovery sleep afterward – sleeping only eight hours after the period of extended sleep deprivation compared with his twin brother, who slept for 9.5 hours. “This study emphasizes that our need for sleep is a biological requirement, not a personal preference,” said American Academy of Sleep Medicine President Dr Timothy Morgenthaler. Philosophers can’t agree on how much we should help refugees—or even whether we should.

Jodi Goldstein, the managing director of Harvard’s Innovation Lab, brags that “when Zuckerberg came back to visit, he said ‘Maybe I wouldn’t have dropped out if the i-lab had existed.’” 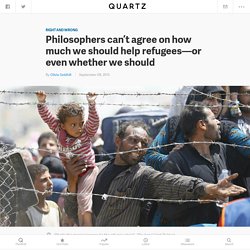 Opened in 2011—five years after Zuckerberg left Harvard to focus on theFacebook.com, an early draft of Facebook—the i-lab is 30,000 square feet of flexibly outfitted space located on Harvard’s Allston, Massachusetts, campus, replete with resources such as grants, lectures, and accelerator programs. How does your day-to-day life impacts the planet? [QUIZ] If a tree falls in a forest.

A fallen tree in a forest "If a tree falls in a forest and no one is around to hear it, does it make a sound? 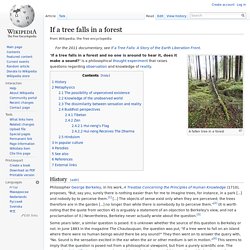 " is a philosophical thought experiment that raises questions regarding observation and knowledge of reality. History[edit] Philosopher George Berkeley, in his work, A Treatise Concerning the Principles of Human Knowledge (1710), proposes, "But, say you, surely there is nothing easier than for me to imagine trees, for instance, in a park [...] and nobody by to perceive them.[1] [...] The objects of sense exist only when they are perceived; the trees therefore are in the garden [...] no longer than while there is somebody by to perceive them Some years later, a similar question is posed. Albert Einstein is reported to have asked his fellow physicist and friend Niels Bohr, one of the founding fathers of quantum mechanics, whether he realistically believed that 'the moon does not exist if nobody is looking at it.' [edit] The possibility of unperceived existence[edit]

Robert Hanks · On Putting Things Off · LRB 10 September 2015. When I hear other people talking about procrastination, I find myself getting proprietorial: surely their fleeting pauses are as nothing to mine. 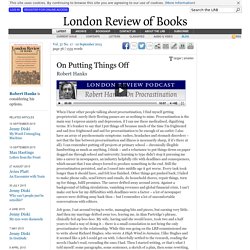 Procrastination is the main way I express anxiety and depression, if I can use these medicalised, dignifying terms. It’s franker to say that I put things off because much of the time I’m frightened and sad (too frightened and sad for procrastination to be enough of an outlet: I also have an array of psychosomatic symptoms: rashes, headaches and stomach disorders – not that the line between procrastination and illness is necessarily sharp, if it’s there at all).

Job gone, I sat around trying to write, managing bits and pieces, but earning very little. Philosophers can’t agree on how much we should help refugees—or even whether we should. Why Generation Y is unhappy. Say hi to Lucy.

Lucy is part of Generation Y, the generation born between the late 1970s and the mid 1990s. She’s also part of a yuppie culture that makes up a large portion of Gen Y. I have a term for yuppies in the Gen Y age group—I call them Gen Y Protagonists & Special Yuppies, or GYPSYs. A GYPSY is a unique brand of yuppie, one who thinks they are the main character of a very special story.

The many problems with being a long-term lone vagabond without a base. Philosophy as therapy - Home. Let's face it. 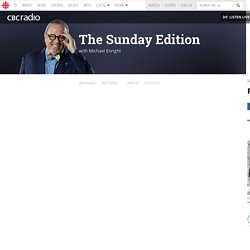 This crazy, mixed-up world can knock you flat sometimes and have you asking yourself big questions: "What does it all mean? " "Who am I? " "What is real happiness? " Why Some Dreams Should Not Be Pursued. Recently, a friend of mine met a woman while on vacation in another country. 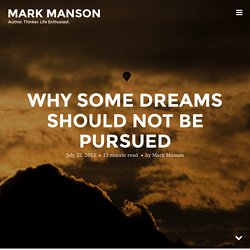 They had immediate chemistry and decided to keep in touch after he left. As the months passed by, he became more and more enamored with her, telling me that he had never met a woman like this before. He said he hadn’t felt this way since he met his last serious ex. Apparently the feeling was mutual, as the woman continued battling through time zones to keep in touch with him as well. Soon, despite living on different continents, they conjured up plans to see each other again. This Is Water. The many problems with being a long-term lone vagabond without a base. Philosophy as therapy - Home. THE 100: The 100, Michael H Hart. "The 100" is perhaps one of the greatest books on the analysis of history ever written. 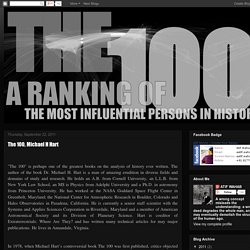 The author of the book Dr. Michael H. Hart is a man of amazing erudition in diverse fields and domains of study and research. He holds an A.B. from Cornell University, an L.L.B. from New York Law School, an MS is Physics from Adelphi University and a Ph.D. in astronomy from Princeton University. He has worked at the NASA Goddard Space Flight Center in Greenbelt, Maryland; the National Center for Atmospheric Research in Boulder, Colorado and Hales Observatories in Pasadena, California. The 100: A ranking of the most influential persons in History by Michael H Hart (10-1) Psiholozi tvrde da su ove 3 stvari potrebne za sretan život. World Schools Debating Championships. 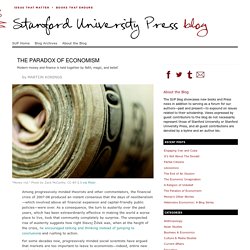 " Poliamorija? Evo vodič za autanje... — Prozor u svijet — Libela. Četvrtak – Znanje liječi, a umjetnost čini život dubljim. 10 Reasons Why Connecting with Conscious Men Is the Only Way to Improve Your Social Life. I was listening to a podcast by Dr. 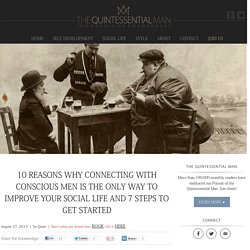 Robert Glover, the author of “No More Mr. Nice Guy.” A phrase he uttered as he closed resonated deeply within me. “Don’t do it alone,” he said. Yet doing it alone is exactly what I have been doing, besides working with Andrian, who lives across the world from me. The Main Goal Of A High-Functioning Marriage — JaysonGaddis.com. Why did you get married? Or if you are not married, why bother? What is the point?

(I asked this on facebook recently and got about 200 responses that were all over the place) 30 Challenges. Quick Scope. SC 12 - The 3 Evolutionary Drivers In Relationship — JaysonGaddis.com. Man is this guy a force! 50 Questions To Promote Metacognition In Students. 50 Questions To Help Students Think About What They Think by Lisa Chesser Using the right questions creates powerful, sometimes multiple answers and discussions. Aristotle said that he asked questions in response to other people’s views, while Socrates focused on disciplined questioning to get to the truth of the matter.

Umjeće ljubavi. Kindess is the New Social Currency. Top 5 Questions to Ask a Man Before You Say “Yes” to a Date. Ah, te /m/učiteljice. HRVOJE IVANČIĆ » Ilegalni imigranti. Why "Selfish" People Are Happier & Healthier. 10 Books that will Change You: Must Reads for Women by Women. Why "Selfish" People Are Happier & Healthier. On my radar: Steven Pinker’s cultural highlights. Oda neradosti. Meet Jayson — JaysonGaddis.com. The Truth About Monogamy, Divorce, And How To Build A Successful Marriage — JaysonGaddis.com.

Stop Trying Too Hard to Be Cool. This Is How You Develop an Unstifled Personality – Brad Branson Interview. SC 11 – Alignment is the New Sexy — JaysonGaddis.com. The Solution to All of Your Life's Problems. Julian Assange in conversation with Slavoj Zizek moderated by Democracy Now's Amy Goodman. Demystifying Attraction - The 3 elements that define great Seducers. Last Week Tonight with John Oliver: Televangelists (HBO) Philo: games about philosophy. Sretan je tko može voljeti : O ljubavi. Xinxin Ming - Faith in Mind. Philosophy Matters. What Is Wrong with the West’s Economies? by Edmund S. Phelps. BBC Radio 4 - A History of Ideas, Writer AL Kennedy on Sartre and the Individual, Jean-Paul Sartre and Existential Choice. The Fateful Impact of Childhood. Rearranged by Motherhood. In Defense of My Messy Desk - Pacific Standard. Writing As Therapy Journal - Journeys. How Visual Thinking Improves Writing.

Age of Distraction: Why It’s Crucial for Students to Learn to Focus. The Benefits of Helping Preschoolers Understand and Discuss Their Emotions. What is Therapy for? A Simple Way to Use Psychology to Run Faster. A Brief History of Male/Female Relations. Once You Start To Embrace Being Alone, These 10 Things Will Happen. The 2 Most Destructive Communication Habits. The Science Behind Intuition. An Unusual Look at the Lives of the Top 1%

Želite li na trenutak znati kako se osjeća dijete s odstupanjem u senzornoj integraciji? Što zapravo znači biti stručnjak? Why half of the life you experience is over by age 7. Uznemirujuće emocije. Religion is a Social Science. Should It Be Studied Like One? The 2 Most Destructive Communication Habits.