How recess can make students better job candidates. Those short play breaks that kids have in school don’t just improve their skill at hopscotch — there’s evidence that recess can actually help with social skills like collaboration and improve focus in the classroom. 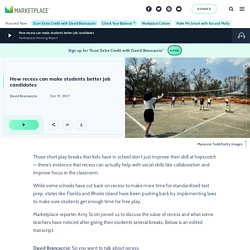 While some schools have cut back on recess to make more time for standardized test prep, states like Florida and Rhode Island have been pushing back by implementing laws to make sure students get enough time for free play. Marketplace reporter Amy Scott joined us to discuss the value of recess and what some teachers have noticed after giving their students several breaks. Below is an edited transcript. David Brancaccio: So you want to talk about recess. Amy Scott: Yes, school recess. Power of the Pack: Success via Community-Based Development. When to listen to players, and when not to. Unconventional Wisdom on Creating a Passionate Community. Crisis and Opportunity: Communities in Good Times and Bad. Sans titre. Overwatch director says it’s “scary” to be open with players. Bringing the Community into the Dev Team. Bringing the Community into the Dev Team. 7 Ways to Succeed with Twitch Streamers. 4 Traits that Vibrant, Fast-Growing Communities Have in Common.

Growing an online community is a daunting task. 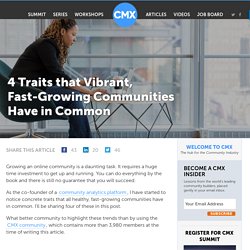 It requires a huge time investment to get up and running. Can a video game company tame toxic behaviour? It took less than a minute of playing League of Legends for a homophobic slur to pop up on my screen. 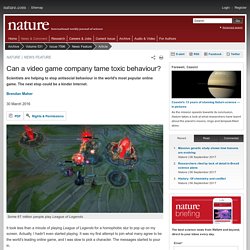 Actually, I hadn't even started playing. Anti Social Behavior in Games How Can Game Design Help? The Long Dark & Community Influenced Development. Day9 On 'Keeping A Community For 5 Years'

How To Become Fireproof: Surviving Internet Negativity. Is the customer always right? Devs talk feeling the pressure. On March 12, 2012, a disgruntled fan of the Mass Effect series posted a message on the official BioWare forum outlining the reasons why he was frustrated with the Shepard trilogy’s ending. 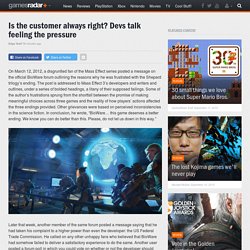 How to Manage a Team of B Players. In 2004, Greece surprised the world by winning the European Championship, the toughest tournament in international soccer. 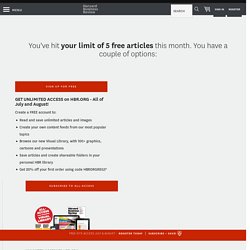 Despite not even being a dark horse in the competition, and with a team of mostly peripheral and unremarkable players, they overcame France and hosts Portugal (twice) to lift the trophy. Even hardcore soccer fans would be unable to name more than two players in that Greek squad, yet few will forget the remarkable collective achievement of a team that faced odds of 150/1 for winning the trophy. What allows a team of B players to achieve A+ success? A great deal of scientific evidence suggests that the key determinants are psychological factors — in particular, the leader’s ability to inspire trust, make competent decisions, and create a high-performing culture where the selfish agendas of the individual team members are eclipsed by the group’s goal, so that each person functions like a different organ of the same organism.

Vision. Analytics. Feedback. Morale. [GDC 2014] You Own the Game but the Community Owns You. Doing Something About the ‘Impossible Problem’ of Abuse in Online Games. Inside Buffer's Community Delight HQ: How We Send Swag. Our customers are the true heart of all we do here at Buffer — and we want to make sure the community knows it. 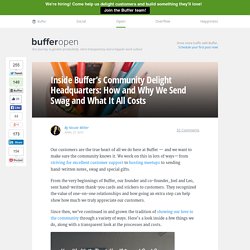 We work on this in lots of ways—from striving for excellent customer support to hosting meetups to sending hand-written notes, swag and special gifts. From the very beginnings of Buffer, our founder and co-founder, Joel and Leo, sent hand-written thank-you cards and stickers to customers. Study finds double-digit growth for firms creating own online communities.

A new study published in Marketing Science, a journal of the Institute for Operations Research and the Management Sciences (INFORMS), shows double-digit revenue growth for firms that create their own brand-specific online communities. 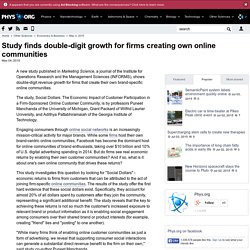 The study, Social Dollars: The Economic Impact of Customer Participation in a Firm-Sponsored Online Customer Community, is by professors Puneet Manchanda of the University of Michigan, Grant Packard of Wilfrid Laurier University, and Adithya Pattabhiramaiah of the Georgia Institute of Technology. Engaging consumers through online social networks is an increasingly mission-critical activity for major brands. While some firms host their own brand-centric online communities, Facebook has become the dominant host for online communities of brand enthusiasts, taking over $10 billion and 10% of U.S. digital advertising spending in 2014. But do firms see real economic returns by enabling their own customer communities? Study finds double-digit growth for firms creating own online communities. Your Customers Are Not Always Right, But They Are Always The Customer. The dream of community. The dream of community In response to my previous post on increased interaction with the world of WoW, Gerry Quinn asked whether there was also increased interaction between players, presumably the selling point for a multiplayer game. 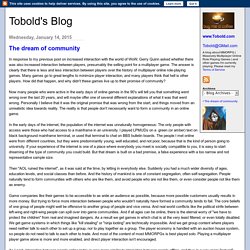 The answer is clearly that there is less and less interaction between players over the history of multiplayer online role-playing games. Many games go to great lengths to minimize player interaction, and many players think that hell is other players. Media.steampowered.com/apps/steamdevdays/slides/args.pdf. Portal 2 and Team Fortress 2 Alternate Reality Games Q&A. Landmark Live #18: Player Studio. Anonymous - don't die. You can call me a game developer who’s in his forties. 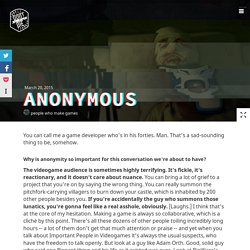 Man. That’s a sad-sounding thing to be, somehow. Why is anonymity so important for this conversation we're about to have? The videogame audience is sometimes highly terrifying. It’s fickle, it’s reactionary, and it doesn’t care about nuance.