User Generated Content - The Upsides and Pitfalls to Level Editors - Extra Credits. Radiator Blog: From modders to mimics: a people's history of the "prop hunt" genre. This post contains minor gameplay spoilers for the first hour of Prey (2017). 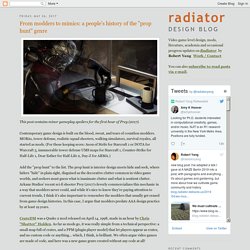 Contemporary game design is built on the blood, sweat, and tears of countless modders. MOBAs, tower defense, realistic squad shooters, walking simulators, survival royales, all started as mods. (For those keeping score: Aeon of Strife for Starcraft 1 or DOTA for Warcraft 3, innumerable tower defense UMS maps for Starcraft 1, Counter-Strike for Half-Life 1, Dear Esther for Half-Life 2, Day-Z for ARMA.) Add the "prop hunt" to the list. The prop hunt is interior design meets hide and seek, where hiders "hide" in plain sight, disguised as the decorative clutter common in video game worlds, and seekers must guess what is inanimate clutter and what is sentient clutter. CrateDM was a Quake 2 mod released on April 14, 1998, made in an hour by Chris "Shatter" Holden. Here is Holden's process and notes from the readme.txt:

What Keeps 'Cities: Skylines' Running. With Cities: Skylines, players have the tools and freedom to create the metropolis of their dreams, whether it’s one that hums like a finely tuned machine or one that puts more emphasis on aesthetics than function. 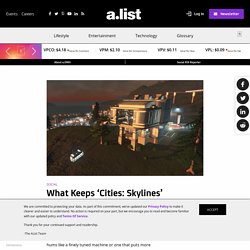 What helps the game stand out from other city builders is its extensive modding community, which creates and shares game additions that range from new buildings to literally rewriting some of the rules. Developed by the Finnish studio, Colossal Order, the simulation game remains as one of Paradox Interactive’s top-selling titles. Earlier this month, the game hit its second anniversary and the publisher announced that it had sold 3.5 million copies worldwide. How Game Developers Build Communities Through Modding. Modifying or “modding” a video game has become a popular pastime for many gamers over the last few decades—skillfully taking an existing game and changing it into something new. 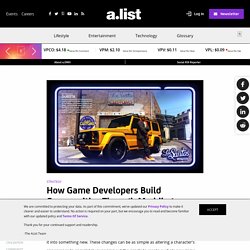 These changes can be as simple as altering a character’s appearance to completely swapping out the assets to create a whole new game altogether. Some of today’s most popular games started as mods, chief among them being Counter-Strike and Dota, and both were acquired by Valve and turned into extremely successful standalone games. Modding keeps a game fluid and relevant, so it’s no wonder that many developers have harnessed this creative community to their advantage.

Rockstar is still rockin’ it with Grand Theft Auto V due to a never-ending realm of possibilities in the game’s open world but also due to creative mods from its fans. These mods range from homemade missions to absurd characters and vehicles—as fun to watch as they are to play. UGC and Workshop in ARK: Survival Evolved. [SPONSORED] IGN Tutorial: Tools for User Generated Content in Sid Meier's Civilization V. Modding in Cities: Skylines with Steam Workshop - Making Games. When we started working on »Cities: Skylines«, we knew from the start that modding would have to be an integral part of the product. »Cities: Skylines« was the first game from Paradox Interactive where we went up against an established AAA-title in a non-niche genre, and we simply lacked the resources to compete in terms of assets and production value. 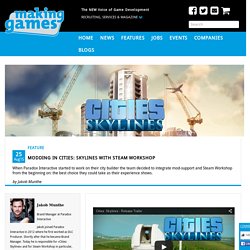 This made modding a target of one of the game’s most obvious flaws, and we implemented it early as one of the demands of the product. We also decided that in order to keep costs low and to let Colossal Order, the studio that developed »Cities: Skylines«, focus on doing what they do best so that we would build the whole game from start around Steam Workshop. Uk.businessinsider. 12 of the most useful Cities Skylines mods - GamerTell. Cities Skylines has been my latest obsession, which is surprising since I’m terrible at it unless I’ve got mods enabled. 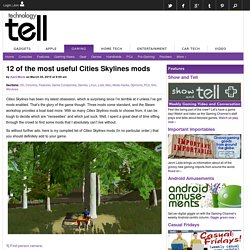 That’s the glory of the game though. Three mods come standard, and the Steam workshop provides a boat load more. With so many Cities Skylines mods to choose from, it can be tough to decide which are “necessities” and which just suck. Well, I spent a great deal of time sifting through the crowd to find some mods that I absolutely can’t live without. So without further ado, here is my compiled list of Cities Skylines mods (In no particular order.) that you should definitely add to your game. Modding in Cities: Skylines with Steam Workshop - Making Games. The Best PC Mods of 2012. My First Mod. This tutorial will teach you how to create and build your first simple Source mod. 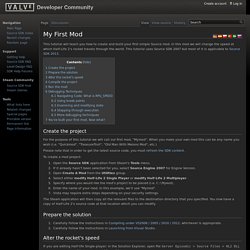 In this mod we will change the speed at which Half-Life 2's rocket travels through the world. This tutorial uses Source SDK 2007 but most of it is applicable to Source SDK 2013. Create the project For the purpose of this tutorial we will call our first mod, "Mymod". When you make your own mod this can be any name you wish (i.e. Please note that in order to get the latest source code, you must refresh the SDK content. Create a Mod. The Create a Mod wizard automates the process of creating a Source mod. 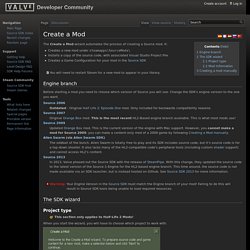 It: Creates a new mod under steamapps\SourceMods\ Installs a copy of the source code, with associated Visual Studio Project File Creates a Game Configuration for your mod in the Source SDK You will need to restart Steam for a new mod to appear in your library. Engine branch. Minecraft 1.8: Modding Tutorial - Episode 1 - Getting Started! How to Mod Civilization 5. Creation Kit Tutorials. Building the Content that Drives the Counter-Strike: Global Offensive Economy. StarCraft II and GameHeart Evolving eSports Interfaces with Modders. Where is your mod, now?: How Valve's paid mod program imploded in four days. Last week, Valve Software made the decision to launch what might have been the most groundbreaking initiative of the year: to facilitate a way for modders -- talented, typically amateur devs and artists who create and share modifications of PC games -- to get paid for their work. 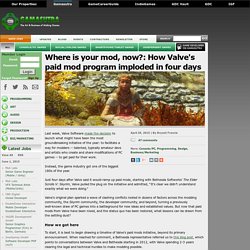 Instead, the game industry got one of the biggest 180s of the year. Just four days after Valve said it would ramp up paid mods, starting with Bethesda Softworks’ The Elder Scrolls V: Skyrim, Valve pulled the plug on the initiative and admitted, “It’s clear we didn’t understand exactly what we were doing.” Valve’s original plan sparked a wave of clashing conflicts rooted in dozens of factors across the modding community, the Skyrim community, the developer community, and beyond, turning a previously well-known draw of PC games into a battleground for new ideas and established values. How we got here To start, it is best to begin drawing a timeline of Valve’s paid mods initiative, beyond its primary announcement. 'What impact has the game modding community had on your career?'

This week saw a tremendous amount of controversy around Valve's decision to first enable, and then abruptly disable, paid mods on Steam. 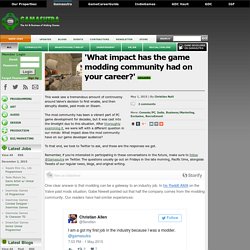 The mod community has been a vibrant part of PC game development for decades, but it was cast into the limelight due to this situation. An inside look at how modding makes PC games better. Peter "Durante" Thoman is the creator of PC downsampling tool GeDoSaTo and the modder behind Dark Souls' DSfix. 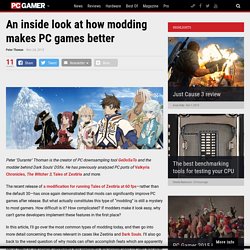 He has previously analyzed PC ports of Valkyria Chronicles, The Witcher 3, Tales of Zestiria and more. How Modding Made Bethesda Better.