(Visited 3,235 times, 2 visits today) Share this: Email Facebook Twitter 4 StumbleUpon Google +1 More Tagged with: Idaho • wolf trapping About The Author Ralph Maughan Dr. Visit Authors Website → If you enjoyed this article, please consider sharing it! 296 Responses to Nancy says: April 8, 2012 at 6:42 am Good editorial. Ken Cole says: April 8, 2012 at 7:43 am This episode won’t change what is happening on the ground. The Lowdown. Immediate Release FOC: Group Calls for Investigation of Trapping Incident. Group Calls for Investigation of Trapping Incident April 3, 2012 Moscow, ID – Yesterday, Friends of the Clearwater urged the Idaho Department of Fish & Game to conduct an investigation into the circumstances surrounding the trapping of a grey wolf in north-central Idaho by Josh Bransford. 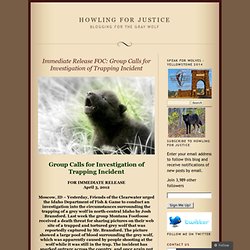 Last week the group Montana Footloose received a death threat for sharing pictures on their web site of a trapped and tortured grey wolf that was reportedly captured by Mr. Bransford. The picture showed a large pool of blood surrounding the grey wolf, which was apparently caused by people shooting at the wolf while it was still in the trap. Friends of the Clearwater is concerned that a number of laws could have been broken during the incident, and would like the matter to receive further attention. “We have wildlife laws in this state that prohibit individuals from interfering with or harassing animals that have been caught in another person’s trap. Photo: Courtesy Jason Hahn 2007. Animal Rights Activists Wage War of Words. Animal Rights Activists Wage War of Words While hunters are torturing and slaughtering wildlife, enraged advocates fight back, animal rights activists wage war of words on social media. 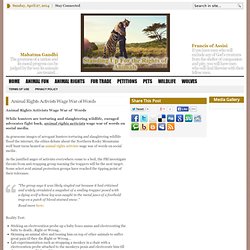 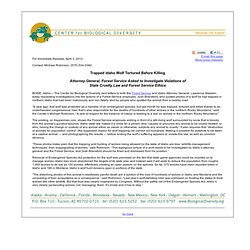 Wildlife groups seek investigation into trapped wolf photo (updated with photo) The photograph of a smiling trapper in front of a living wolf in a leghold trap surrounded by bloody snow has angered wildlife groups and captured national attention. But Idaho Department of Fish and Game official said the trapper broke no laws. The trapper had all of the necessary permits, permission from the landowners and he had participated in the mandatory wolf trapping class, conservation officers found when they investigated. “They couldn’t find that he did anything illegal,” said Mike Keckler, Fish and Game communications chief. Had the trapper followed guidance provided in the trapping class he would not have photographed himself with the live-trapped animal, Keckler said. “We would have preferred that he dispatched the animal before taking the photograph with it,” Keckler said. Wasden's spokesman Bob Cooper said the attorney general doesn't have the authority to bring criminal charges.

The picture, first posted on Trapperman.com, is below. Photo from Earth Island Journal. Wolf Torture and Execution Continues in the Northern Rockies. By James William Gibson – March 28, 2012 Montana Anti-Trapping Group Gets Death Threat for Releasing Photos On March 16, a Friday, a US Forest Service employee from Grangeville, Idaho, laid out his wolf traps. 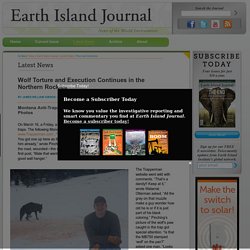 The following Monday, using the name “Pinching,” he posted his story and pictures on www.Trapperman.com . “I got a call on Sunday morning from a FS [Forest Service] cop that I know. You got one up here as there was a crowd forming. All photographs were taken from Trapperman.com website are being reproduced here under Fair Use“Pinching” with the wolf he trapped that he wrote would make him “a good wall hanger.”

The Trapperman website went wild with comments. By late March some 117 Idaho wolves had been killed in traps and snares, and another 251 shot. Stripped of Protection, Wolves Face 'Second Extermination' in US. Wildlife advocates are outraged by photos that show a captured wolf being tortured by a Forest Service employee in Idaho. 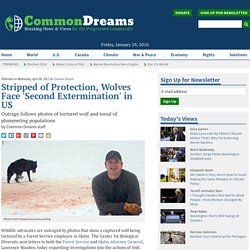 The Center for Biological Diversity sent letters to both the Forest Service and Idaho Attorney General, Lawrence Wasden, today requesting investigations into the actions of Josh Bransford, who posted photos of a wolf he had trapped in northern Idaho that had been maliciously and non-fatally shot by people who spotted the animal from a nearby road. The specific incident highlights only the most heinous kind of threat wild wolves face since they were removed from the Endangered Species list last year. Across the western states, wolf populations have plummeted since losing federal protection as hunters have aggressively targeted the species.

Animal rights activists, in a recent Reuters report, said they are sickened at the online flurry of pictures depicting wolf kills, and alarmed by comments suggesting a growing desire to shoot, trap and snare wolves.