Government is Good - The Anti-Government Campaign. There is a war on government in this country. 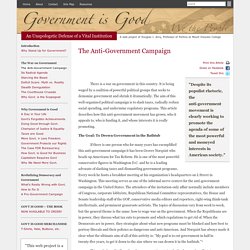 It is being waged by a coalition of powerful political groups that seeks to demonize government and shrink it dramatically. The aim of this well-organized political campaign is to slash taxes, radically reduce social spending, and undermine regulatory programs. This article describes how this anti-government movement has grown, who it appeals to, who is funding it, and whose interests it is really promoting. The Goal: To Drown Government in the Bathtub. George Lakoff: Embedded Narratives and Cognitive Linguistics Explain Trump's Followers. (Photo: Darron Birgenheier)GEORGE LAKOFF FOR BUZZFLASH AT TRUTHOUT Donald Trump is winning Republican presidential primaries at such a great rate that he seems likely to become the next Republican presidential nominee and perhaps the next president. 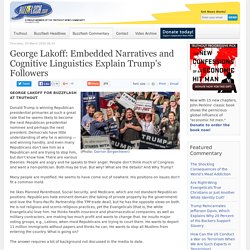 The rise of American authoritarianism. The American media, over the past year, has been trying to work out something of a mystery: Why is the Republican electorate supporting a far-right, orange-toned populist with no real political experience, who espouses extreme and often bizarre views? 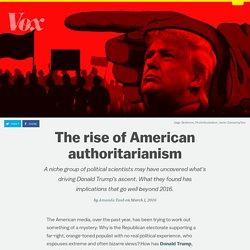 How has Donald Trump, seemingly out of nowhere, suddenly become so popular? What's made Trump's rise even more puzzling is that his support seems to cross demographic lines — education, income, age, even religiosity — that usually demarcate candidates. Theconversation. While Donald Trump continues to hold a commanding lead among Republicans in the race for the 2016 presidential nomination, National Review, the country’s leading conservative magazine, thinks otherwise. 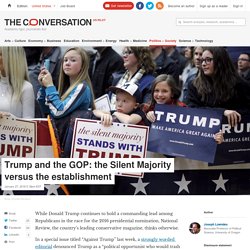 In a special issue titled “Against Trump” last week, a strongly worded editorial denounced Trump as a “political opportunist who would trash the broad conservative ideological consensus within the GOP in favor of a free-floating populism with strong-man overtones.” This was followed by 22 pieces by prominent conservative writers who elaborated this message. With the popular real estate magnate polling at 46 percent among Republican voters, however, this signals a crisis for the GOP and the conservative movement more broadly. Here’s why. National Review makes the case for conservatism.

The Tea Party. Purists Gone Wild: Prohibition, Revisited? Timothy Egan on American politics and life, as seen from the West. 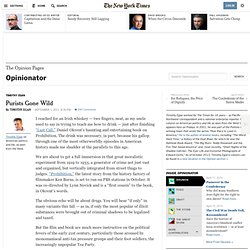 Words of our American Founding Fathers. Whatever Happened To Separation Of Church And State? Unelectable Atheists: U.S. States That Prohibit Godless Americans From Holding Public Office. By Matthew Bulger With election season upon us, and a near constant stream of public jabs and rebuttals between incumbents and their challengers, we should focus on something besides the Americans that are running for office. 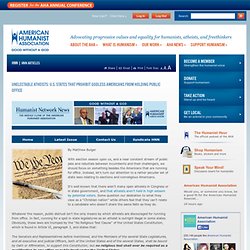 Instead, let’s turn our attention to a rather peculiar set of state laws relating to elections and nonreligious Americans. What the Right Gets Right. With the competitors for the Republican presidential nomination engaged in an intriguing and unexpected debate over the dangers of capitalism’s “creative destruction,” this is the appropriate moment to explore the question: What does the right get right? 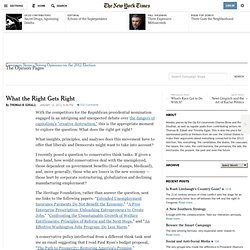 What insights, principles, and analyses does this movement have to offer that liberals and Democrats might want to take into account? I recently posed a question to conservative think tanks: If given a free hand, how would conservatives deal with the unemployed, those dependent on government benefits (food stamps, Medicaid), and, more generally, those who are losers in the new economy — those hurt by corporate restructuring, globalization and declining manufacturing employment? How Republicans are being taught to talk about Occupy Wall Street. Protesters form a wall of signs at the Occupy Portland camp in downtown Portland, Oregon. 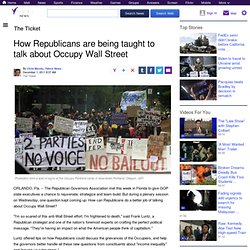 (AP) ORLANDO, Fla. -- The Republican Governors Association met this week in Florida to give GOP state executives a chance to rejuvenate, strategize and team-build. But during a plenary session on Wednesday, one question kept coming up: How can Republicans do a better job of talking about Occupy Wall Street? "I'm so scared of this anti-Wall Street effort. I'm frightened to death," said Frank Luntz, a Republican strategist and one of the nation's foremost experts on crafting the perfect political message. How to Beat Obama - By Karl Rove and Ed Gillespie. In an American election focused on a lousy economy and high unemployment, conventional wisdom holds that foreign policy is one of Barack Obama's few strong suits. 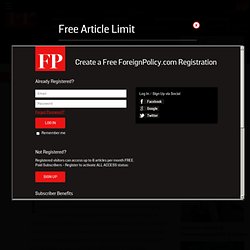 But the president is strikingly vulnerable in this area. The Republican who leads the GOP ticket can attack him on what Obama mistakenly thinks is his major strength by translating the center-right critique of his foreign policy into campaign themes and action. Eric Sapp: Why Democrats Must Read Ayn Rand. Ayn Rand's novel Atlas Shrugged has been among Amazon's top 20 bestsellers for much of the past year. 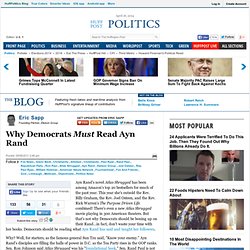 Ayn Rand's Gospel of Selfishness and Billionaire Empowerment Is Plaguing America. February 7, 2013 | Goodbye to All That: Reflections of a GOP Operative Who Left the Cult. Barbara Stanwyck: "We're both rotten! " Fred MacMurray: "Yeah - only you're a little more rotten. " -"Double Indemnity" (1944) Those lines of dialogue from a classic film noir sum up the state of the two political parties in contemporary America. Both parties are rotten - how could they not be, given the complete infestation of the political system by corporate money on a scale that now requires a presidential candidate to raise upwards of a billion dollars to be competitive in the general election?

The Radical Christian Right and the War on Government - Chris Hedges. The Radical Christian Right and the War on Government. What Republicans Think. I guess I’d say Republicans don’t have an illness; they have a viewpoint. Let me describe it this way: In the 1950s, Dwight Eisenhower reconciled Republicans to the 20th-century welfare state. Between Ike and George W. Bush, Republican leaders basically accepted that model. The Outsourced Party. Who speaks for the Republican party? Inside Karl Rove’s Secret Kingdom: Craig Unger on Stolen Votes, Political Attacks, Billionaire Ties. Exclusive: Inside Karl Rove's Billionaire Fundraiser. On the final morning of the Republican National Convention, Karl Rove took the stage at the Tampa Club to provide an exclusive breakfast briefing to about 70 of the Republican Party’s highest-earning and most powerful donors.

During the more than hour-long session, Rove explained to an audience dotted with hedge fund billionaires and investors—including John Paulson and Wilbur Ross—how his super PAC, American Crossroads, will persuade undecided voters in crucial swing states to vote against Barack Obama. Let’s just say it: The Republicans are the problem. We have been studying Washington politics and Congress for more than 40 years, and never have we seen them this dysfunctional. G.O.P. Nightmare Charts. GOP.

Red State Socialism? One could not have caroused the internet to satisfy their desire for politics without coming across the concept of red and blue states. It is a well known concept that red represented the Republican party, while blue represented that of the Democrats. Even Critics of Safety Net Increasingly Depend on It. Moochers Against Welfare. Modern Republicans are very, very conservative; you might even (if you were Mitt Romney) say, severely conservative. Rachel Maddow Mocks Mitt Romney's Interview Blitz.

SECRET VIDEO: Romney Tells Millionaire Donors What He REALLY Thinks of Obama Voters. During a private fundraiser earlier this year, Republican presidential candidate Mitt Romney told a small group of wealthy contributors what he truly thinks of all the voters who support President Barack Obama. Richard (RJ) Eskow: Ryan's 'Secret' Tape Is Even More Extreme Than Romney's. A Financier in Chief.