This Guy Wants Us to Commute in Autonomous, On-Demand Pods. When Tommaso Gecchelin envisions the future of urban transportation, he, like many people, imagines a system of driverless electric cars. 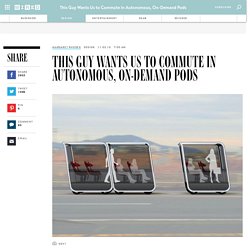 But in Gecchelin’s vision, the system is modular. Its boxy vehicles are flat-sided, identically sized, and can link up and disconnect on the fly. He calls the concept “Next,” and foresees it providing both on-demand rides and shared public transportation, like a futuristic cross between Uber and the city bus. Imagine a Next pod pulling up to your house in the morning, before scooping up your neighbor, and then, once it’s on a main road heading for downtown, affixing itself to another couple pods. Everyone goes to work, together. Shocking Facts You Did Not Know A Minute Ago. How Drugs Helped Invent the Internet & The Singularity: Jason Silva on "Turning Into Gods".

The Future, as Imagined by Google. How Google Builds Its Maps—and What It Means for the Future of Everything - Alexis C. Madrigal. An exclusive look inside Ground Truth, the secretive program to build the world's best accurate maps. 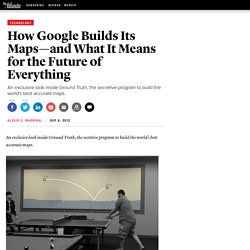 Behind every Google Map, there is a much more complex map that's the key to your queries but hidden from your view. The deep map contains the logic of places: their no-left-turns and freeway on-ramps, speed limits and traffic conditions. Google gets license to test drive autonomous cars on Nevada roads. On Monday, the Nevada Department of Motor Vehicles approved Google’s license application to test autonomous vehicles on the state’s roads. 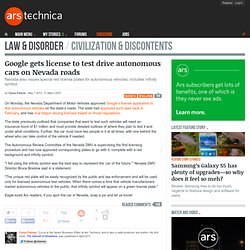 The state had approved such laws back in February, and has now begun issuing licenses based on those regulations. Driverless car bill is signed in California at Google headquarters. 26 September 2012Last updated at 07:13 ET Governor Brown arrived in one of Google's driverless vehicles A bill to bring driverless cars to roads in California has been signed. 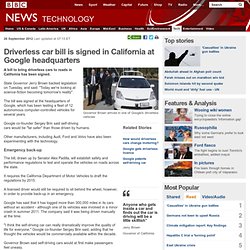 State Governor Jerry Brown backed legislation on Tuesday, and said: "Today we're looking at science-fiction becoming tomorrow's reality". Imagining A Future City Filled With Driverless Cars And Without Any Parking Spaces. As self-driving cars move from fantasy to reality, what kind of effect will they have on cities? 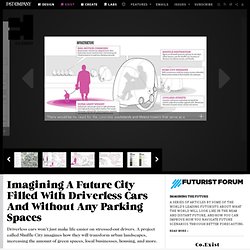 A fantastical research and urban prototyping project called Shuffle City investigates, and in the process, becomes a manifesto for a new kind of modern city--one that depends less on traditional public transportation like buses or light rail and more on creating a fleet of continuously moving automated vehicles to serve urban mobility needs. Focusing on Houston--the country’s car-oriented fourth largest city--the project "identifies opportunities outside of the ownership model to liberate an otherwise suppressed urban landscape, by programming a dynamic system of flow that is made more immediately possible through a public autonomous (driverless) vehicle fleet," according to its website.

The project wonders: "Is there a new model for American cities, in which mobility can reverse the effect of city centers consumed by the private motor car and its needs? " It's Jetsons Time: Driverless Pods Are Taking To The Street In England. In the future, you won't hail a cab or wait at a bus stop. 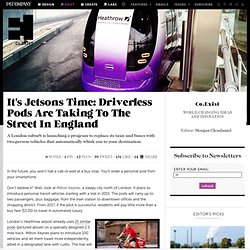 You'll order a personal pod from your smartphone. Don't believe it? Well, look at Milton Keynes, a sleepy city north of London. It plans to introduce personal transit vehicles starting with a trial in 2015. The pods will carry up to two passengers, plus baggage, from the train station to downtown offices and the shopping district. London's Heathrow airport already uses 21 similar pods (pictured above) on a specially designed 2.5 mile track.

Purpose-built in the 1960s, Milton Keynes has an unusual grid layout that makes it an ideal testing ground. Google Data Center Walkthrough. This doohickey turns your normal bike into an electric bike. Watercar the Amphibious Car. The Aluminum Airship of the Future Has Finally Flown. Crazy Hoverbike is Capable of Flying to 10,000 Feet. Even though this crazy hoverbike hasn’t yet left the inventor’s neighborhood, the high-flying invention has some amazing potential. 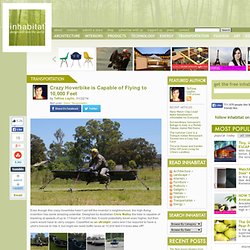 Designed by Australian Chris Malloy the bike is capable of traveling at speeds of up to 173mph at 10,000 feet. It could potentially travel even higher, but then users would have to carry oxygen. The dune buggy that can fly. In Google Earth. Is This What Urban Buildings Will Look Like In 2050? In the two weeks since President Donald Trump issued his executive order on immigration, banning travel from seven Muslim-majority countries, he's met with opposition from a surprising sector: the tech industry. 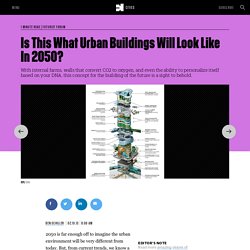 In a radical change of tune since executives like Jeff Bezos and Sheryl Sandberg filed into Trump Tower to meet with the president in December, 128 tech companies have now filed an amicus brief against the ban; the Washington Post reported that Apple CEO Tim Cook said in a company-wide email that the ban "is not a policy we support" and added that "Apple would not exist without immigration. " The New Second Tallest Building In The World Is An Urban Green Space Wonderland.

The second tallest building in the world is more like a vertical city than a building. 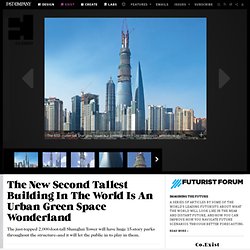 The New York Times on TreeHugger Founder's Tiny Apartment and Its "Convertible Tricks" LifeEdited/CC BY 2.0 Since 2010, TreeHugger founder Graham Hill has been rethinking how much we really need to live, and trimming down all his needs into one tiny, hyper-functional, changeable space. 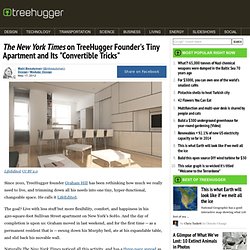 The new battery charges rapidly, can withstand over 7,500 charging cycles without a drop in capacity, and can generate two volts of electricity—stats that represent a step forward compared to previous generations of the tech. “We have developed a rechargeable aluminum-ion battery that may replace existing storage devices, such as alkaline batteries, which are bad for the environment, and lithium-ion batteries, which occasionally burst into flames,” said Stanford chemistry researcher Hongjie Dai.

“Our new battery won’t catch fire, even if you drill through it.” Scientists have long been intrigued by aluminum batteries due to their low cost and safety advantages over lithium, which can pose a fire hazard.