Deals with the social structures and relationships that organise people and create organisations. It considers things like family structures, business models, markets, and governance structures.

Why childhood sweethearts no longer measure up – and six other ways dating has changed. Co-living's a Growing Trend - Not just among Millennials. A 21st-century version of dormitory living for adults is emerging as a way for city dwellers to deal with expensive real estate, social isolation and environmental pressures. 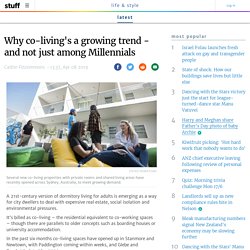 It's billed as co-living – the residential equivalent to co-working spaces – though there are parallels to older concepts such as boarding houses or university accommodation. In the past six months co-living spaces have opened up in Stanmore and Newtown, with Paddington coming within weeks, and Glebe and Randwick slated for 2020. Rebecca Dracup, an environmental engineer at Stantec-owned Wood and Grieve Engineers, said co-living was a growing trend around the world. READ MORE: * How to make multi-generational living work for you * Two couples' new build designed for multigenerational living * Our changing homes show we're craving more connection * The benefits of multigenerational living * Extended family households growing but can Kiwi homes cope? 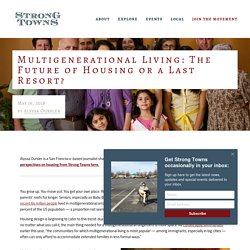 According to the most recently available Census data, the average unit in Santa Ana houses more than four people. For comparison, state and national averages are both below three. According to the Pew Research Center, multigenerational housing is also more common among Hispanics, who make up almost 80 percent of Santa Ana’s population. This trend is taken into consideration as Santa Ana undertakes new projects, according to Judson Brown, housing division manager of the city’s Community Development Agency.

The simple but ingenious system Taiwan uses to crowdsource its laws. It was late in 2015, and things were at an impasse. 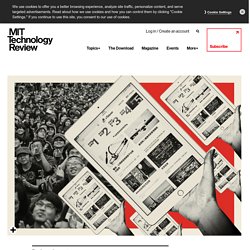 Some four years earlier, Taiwan’s finance ministry had decided to legalize online sales of alcohol. To help it shape the new rules, the ministry had kicked off talks with alcohol merchants, e-commerce platforms, and social groups worried that online sales would make it easy for children to buy liquor. But since then they had all been talking past each other. Chinese Surveillance Literally Getting in Workers' Heads. Feel like your boss is a bit of a micromanager, always looking over your shoulder? 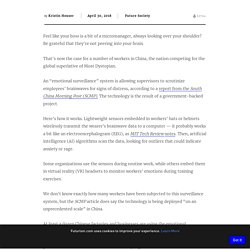 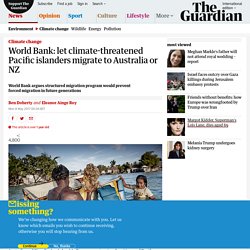 The policy paper, Pacific Possible, suggests as one climate change adaptation measure, open access migration from Tuvalu and Kiribati – for work and permanent settlement – to Australia and New Zealand. Tuvalu (population 11,000) and Kiribati (107,000) are low-lying archipelago nations in the Pacific acutely vulnerable to climate change, in particular to rising sea levels that have already begun inundating land and homes across the islands. The World Bank paper argues a structured migration program instituted now would prevent a more harried, forced migration in future generations. “The worsening impacts of climate change have provided a new moral imperative for providing open access,” the report says. 10 Ways to Accelerate the P2P & Commons Economy. Let’s engage in a way to produce goods and create value that is free, fair, and sustainable! 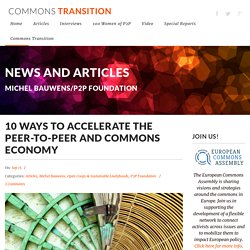 What is peer production and commons economics? More importantly, how can they help bring about a thriving economy that work for people and planet? The following 10 ideas for action are the result of 10 years of research at the P2P Foundation on the emerging practices of new productive communities and those ethical entrepreneurial coalitions that can create livelihoods on top of shared resources. Together, they emphasize the emerging practices that can bolster the resilience of a new ethical economy. Our goal is to encourage the creation of new entities that overstep the traditional corporate form and its extractive profit-maximizing practices. Complexity, Citizen Engagement in a Post-Social Media Time. As Big Economies Falter, Micro-Currencies Rise. More consumers are walking away from fiat currencies to drive commerce -- and society -- with new ways of buying. 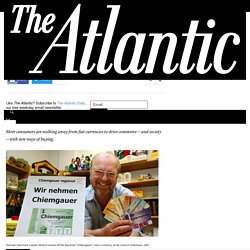 EU E-Gov. Report: Countries Should Follow Estonia’s Lead. According to the European Union e-government report 2016, other countries should follow the steps Estonia has taken in e-governance and the availability of online services to the public. 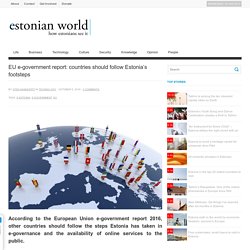 The greatest progress over the years in customer-centricity of e-government services has been achieved by Austria and Estonia, while Portugal and Spain are stable since 2012. Fighting Food Poverty Through 'Social Eating' “I’d call myself a ‘social eating advocate’... or maybe a ‘food crisis responder’,” says Marsha Smith as we sit down for lunch at her home on the outskirts of Nottingham. 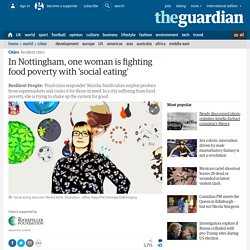 “The fact is, some people just want someone to cook them dinner, and there’s no harm in that.” I heartily agreed as I tucked into the homemade vegetarian and wheat-free meal she’d just placed in front of me. Almost every item of food on my plate had come via FareShare, an organisation that relieves supermarkets of surplus food (food that’s in date and good to eat, but won’t be sold due to reasons like over-ordering or incorrect labelling) and redistributes it to charities and community projects around the UK. Ageing Populations Could be Good for the Economy. The world’s population is getting older. 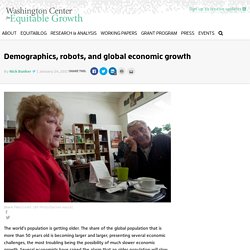 The share of the global population that is more than 50 years old is becoming larger and larger, presenting several economic challenges, the most troubling being the possibility of much slower economic growth. Several economists have raised the alarm that an older population will slow growth due to lower productivity, less labor force participation, and less investment growth.

If this hypothesis is true, then the global economy could be in store for a sustainable period of weak growth. But are these fears about the future overblown? In a new working paper, economists Daron Acemoglu of the Massachusetts Institute of Technology and Pascual Restrepo of Boston University look at the relationship between an aging population and aggregate economic growth. Given the expectations that an aging population should stifle growth, what could explain this lack of a negative relationship? ‘The age of the citizen is coming' Against a backdrop of Brexit, now is a pertinent time to rethink our ideas of society. Jon Alexander suggests that when we consider ourselves citizens rather than consumers, communities are stronger and more effective Shortly after taking over as prime minister, Theresa May put “the spirit of citizenship” right at the heart of her vision for Britain. In his farewell speech in January, Barack Obama declared the citizen “the most important office in any democracy”.

He and Michelle have placed citizenship at the heart of their vision for his Presidential Center in Chicago and the associated Obama Foundation. How Blockchain is Impacting Clean Energy. No one enjoys paying their electricity bill. How blockchain could upend power markets. Talk about a disruptive technology. Making Economies Distributive by Design. Rule of Law 2.0; Towards a Definition. Blockchain + Energy… why all the fuss? The Huge Problem of the Mega-Corporate.

Why Medieval Peasants Got More Vacation Time Than You. End of Nations: Is There an Alternative to Countries? Climate Change Casts Doubt Over Parenthood. A conference attendee looks at a projection of Earth on the opening day of the COP 21 United Nations conference on climate change, in November on the outskirts of Paris. Ageing Populations & Regional Decline. Population By comparison with most of its structurally older OECD counterparts, New Zealand’s population has grown strongly over the past two decades with annual growth rates averaging above 1.0 per cent. Auckland accounted for over half of this growth, while the remaining growth was unevenly distributed across the rest of the country. Between 1996 and 2013, Auckland and the three other fastest growing cities (Tauranga, Hamilton and Wellington) shared two-thirds of the growth, while Auckland and just 13 of the total 67 territorial local authority areas (TA’s) accounted for over 90 per cent, leaving a bare 10 per cent to be shared among the remaining 53 TA’s.

Of the latter, 22 declined in size across the period, a situation that for many rural areas will be permanent. The End of the Extraction Economy. Tech. & Bioscience, Not Ideology, Now Threaten Democracy. Eight Future Digital Health Jobs To Watch. The Gig Economy Helps Make the Case for UBI. Pivotal Moment As Candidates Retreat From Free Trade. Can AI Run a Traditional Bank Without Staff? Imagining A Corporation In 2050. Why The Game of Business Needs to Change Its Rules. The End of Power? Reinventing Organizations. Crowd Funding Taps Into Australian Real Estate. Need For Trade Choices Beyond Just Nationalism & Globalisation.

Neoliberalism Is Dying From Within. The Misconceptions of Holocracy. See Ya Capitalism, the Collaborative Economy Is Taking Over. Sharing Economy Could End Capitalism, But That's Not All. Revealed: The Capitalist Network Running The World.