Some say this vintage industrial steam era inspired interior and fashion trend was solidified with the amazing interiors of Robin Standefer and Stephen Alesch of Roman and Williams hit the scene. Their design of hospitality spaces across the board is amazing! Have you see the trend popping up? I feel like I see it everywhere... and I love it! Images via roman and williams, cote maison, mikkel vang, house beautiful, my sparrow and glamour. Directory. Steambirds: Survival: Goodbye Handcrafted Levels. Steambirds: Survival, the sequel to our original steampunk airplane strategy game was just released today. 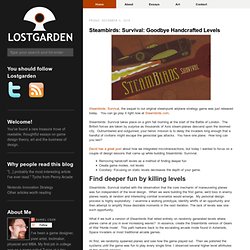 You can go play it right now at Steambirds.com. Steambirds: Survival takes place on a grim fall morning at the start of the Battle of London. The British forces are taken by surprise as thousands of Axis steam-planes descend upon the doomed city. Outnumbered and outgunned, your heroic mission is to delay the invaders long enough that a handful of civilians might escape the genocidal gas attacks. You have one plane. SteamBirds: Survival. Steampunks gather for Great Exhibition.

Ian Crichton, aka inventor Herr Doktor, takes us around the Steampunk party for period 'scientists' The Great Exhibition of 2010 was held at London's La Scala club - though on a smaller scale than the 19th Century original. 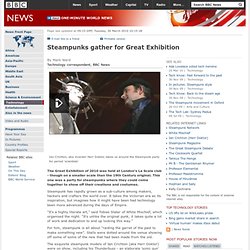 This one was a party for steampunks where they could come together to show off their creations and costumes. Steampunk has rapidly grown as a sub-culture among makers, hackers and crafters the world over. It takes the Victorian era as its inspiration, but imagines how it might have been had technology been more advanced during the days of Empire. "It's a highly literate art," said Tobias Slater of White Mischief, which organised the night. For him, steampunk is all about "raiding the garret of the past to make something new". The exquisite steampunk models of Ian Crichton (aka Herr Doktor) were on show, including his Thunderbuss - an elaborate 'sonic gun' intended to scare off birds. .:Lest I Smite Thee:. Robin's Mystery Blog. Arthrobots - Original steampunk insect sculptures by Tom Hardwidge. Victorian Steampunk Wedding. Design Art Cartoons Cars About Follow. 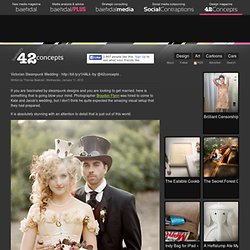 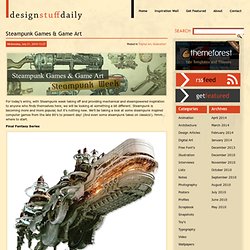 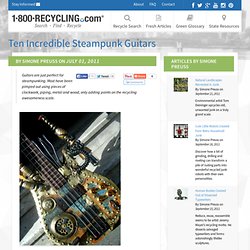 There’s nothing wrong with a regular guitar — and electric guitars are of course arguably the coolest of modern instruments — but after seeing the creations we've collected here, you might look at the old six-stringer you have lying around and suddenly think it's a bit boring. Customizing — or in this case, steampunking — your guitar will add so much to its esthetic potential. See, apart from the fact that it will increase its weight, with all the recycled nuts, bolts, screws and nifty gadgets like valves, clocks and more added to it, your guitar will become a true one-of-a-kind. We’ve found 10 guitars that seem to have come straight from the age of steam power — with a riff of electric futurism thrown in for good measure! 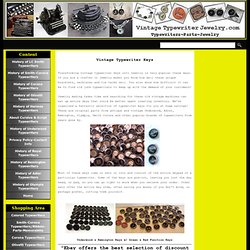 If you are a crafter or jewelry maker you know how well these unique bracelets, necklaces and tie tacks sell. You also know how difficult it can be to find old junk typewriters to keep up with the demand of your customers! Jewelry making takes time and searching for these old vintage machines can eat up entire days that could be better spent creating inventory. Dr Grordbort's Infallible Aether Oscillators - Rayguns, beasts, buffoons and fair maidens! 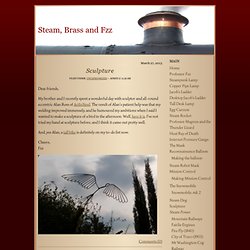 The result of Alan’s patient help was that my welding improved immensely, and he humoured my ambitions when I said I wanted to make a sculpture of a bird in the afternoon. Well, here it is. And, yes Alan, a tall bike is definitely on my to-do list now. Cheers, Fzz January 20, 2013 Snowmobile, Mark 2 It snowed again! November 13, 2011 Steam Dog Last Saturday my youngest son came into my bedroom early in the morning carrying a big pile of cardboard he’d collected and declared that he wanted me to make him a scary mask, just like his big brother. Read on. December 21, 2010. SteamPunk Magazine. 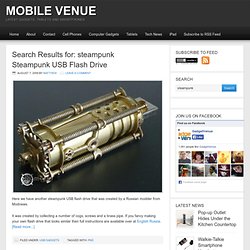 These were the Steampunk Nerf Maverick Gun and a Steampunk Furnace Mouse. Both look cool and this next one is no exception. I have to admit that it’s not something I would ever wear to a party, but it is still quite cool to see. The Steampunk Home. How Steampunk Works" Flickering gas lamps puncture a thick London fog. A metallic, rhythmic noise begins to drown out the normal sounds of the evening. An army of copper clockwork automatons comes marching out of the darkness. Overhead, a looming dirigible barely clears the tallest buildings. Brass nozzles emerge from the airship's gondola, blasting fire down upon the rooftops.