It would be nice to bring all our sg examples in a more structured way.
Maybe this is our way

The Virtual Trillium Trail an Educational Simulation of a North American Forest by Virtual Field Trips, LLC. ESET security adventure game. About the EVOKE game. Posted by Alchemy on 27 Jan under Behind the scenes EVOKE is a ten-week crash course in changing the world. 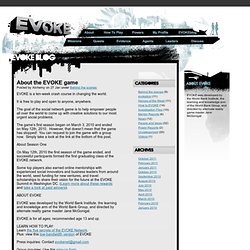 It is free to play and open to anyone, anywhere. The goal of the social network game is to help empower people all over the world to come up with creative solutions to our most urgent social problems. The game’s first season began on March 3, 2010 and ended on May 12th, 2010. However, that doesn’t mean that the game has stopped! About Season One On May 12th, 2010 the first season of the game ended, and successful participants formed the first graduating class of the EVOKE network.

Some top players also earned online mentorships with experienced social innovators and business leaders from around the world, seed funding for new ventures, and travel scholarships to share their vision for the future at the EVOKE Summit in Washington DC. EVOKE is for all ages; recommended age 13 and up. LEARN HOW TO PLAY: Learn the five secrets of the EVOKE Network. Serious Games Interactive.

Activeworlds, Inc. is the vendor who developed the virtual world platform that River City utilizes. They are also currently responsible for the day-to-day hosting of the environment, and have proposed a plan that will keep River City alive and well during the upcoming school year. Activeworlds has a long history of working to enable teachers and schools with easily accessible and stable virtual worlds since 1995. From our discussions with many teachers involved in River City the program has been a valuable tool for reaching students and we want to make sure that it continues. The plan would mean that Activeworlds would continue supporting and administering all servers and programs currently being run.

Now the part where we ask you to help: As you are likely aware, River City was developed under certain grants and its funding runs out in August 2009. eLECTIONS Your Adventure in Politics brought to you by Cable in the Classroom. Stop Disasters. 3rd World Farmer: A simulation to make you think. Christian Aid - Citizenship. Karma Tycoon : Free Online RPG. CalytrixTechnologies's Channel‬‏ ThinkingWorlds Base Applet. Alelo: Immersive simulations of real-life social communication. Welcome to an exploration of: Multiplayer games, virtual worlds and energy efficiency. Virtual Warrior - US Army Korea - Close Combat Tactical Trainer. 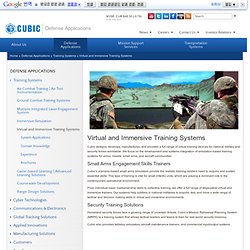 TML Studios Entwicklerblog: Home. Zero_hour.swf (application/x-shockwave-flash Object) RealTimeImmersive's Channel. Scene_NEW. INNOV8: CityOne. DARWARS. DARWARS Ambush DARWARS is a research program intended to accelerate the development and deployment of military training systems. These are envisioned as low-cost, mobile, web-centric, simulation-based, “lightweight” systems designed to take advantage of the ubiquitous presence of the PC and of new technology, including multi-player games, virtual worlds, off-the-shelf PC simulations, intelligent agents, and on-line communities. The project started in 2003. The program is producing an architectural framework, including a set of web services, tools, and system interface definitions that facilitate the development of networked training systems.

URGENT: Syrian children and their families need your help The crisis in Syria is entering a sixth brutal year. 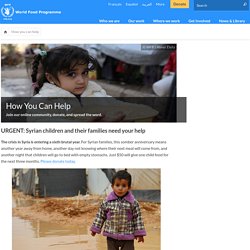 For Syrian families, this somber anniversary means another year away from home, another day not knowing where their next meal will come from, and another night that children will go to bed with empty stomachs. Just $50 will give one child food for the next three months. Please donate today. Make A Donation WFP is 100% voluntarily funded, so every donation counts. 90% of every donation goes directly towards getting food to hungry children and their families -- meaning you can make an incredible impact. Join Our Online Community Be a part of the World Food Programme's Online Community where we all have one goal in common -- ending hunger. Our Work Together Changes Lives. Serious Games for Homeland Security - BreakAway, Ltd - Award-Winning Developer of Numerous Real-Time Strategy Games and Technologically Advanced Desktop Development Software.

Incident Commander™ NIMS-compliant training tool for Homeland Security Disaster strikes a community through a severe storm, a chemical spill, a terrorist bomb, or a hostage situation in a local school. 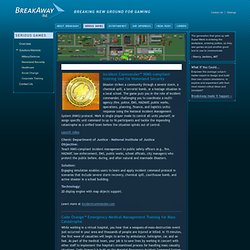 The game puts you in the role of incident commander, challenging you to coordinate a multi-agency (fire, police, EMS, HAZMAT, public works, operations, planning, finance, and logistics units) response using the National Incident Management System (NIMS) protocol. Work in single player mode to control all units yourself, or assign specific unit command to up to 16 participants and tackle the impending catastrophe as a unified team before the situation spirals out of control.

Launch video Client: Department of Justice – National Institute of Justice. Red Cross - The Game. 26 Learning Games for Change. Note: Learning games have really taken off since I originally wrote this post a number of years ago (right before the 5th annual Games for Change Festival). 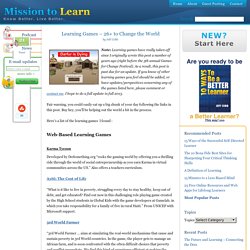 As a result, this post is past due for an update. If you know of other learning games you feel should be added, or have updates/perspectives concerning any of the games listed here, please comment or contact me. I hope to do a full update in fall 2013. Fair warning, you could easily eat up a big chunk of your day following the links in this post. Buy hey, you’ll be helping out the world a bit in the process. Division of Blitz Games Studios Ltd. Moonbase Alpha Game. Step into the role of an explorer in a futuristic lunar settlement... 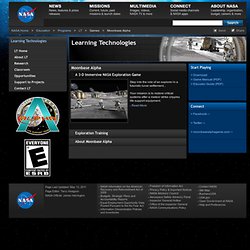 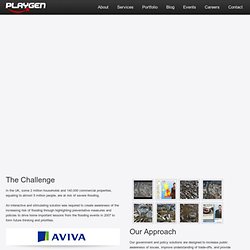 An interactive and stimulating solution was required to create awareness of the increasing risk of flooding through highlighting preventative measures and policies to drive home important lessons from the flooding events in 2007 to form future thinking and priorities. Empire & State. Portfolio. E M E R G E N C Y 4.