President Trump’s Lies, the Definitive List - The New York Times. Effectively fact-check Donald Trump. "You do need the facts but you need to know how to present those facts," George Lakoff, a professor of cognitive science and linguistics at UC Berkeley, told CNN's Brian Stelter during "Reliable Sources. 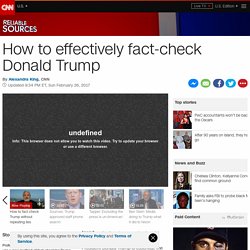 " From the crowd size at his inauguration to national murder rates, journalists have tended to simply counter Trump's claims by first repeating them -- then reporting that they are false. But that's not enough, Lakoff said. The central tenet of his theory when it comes to fact-checking Trump, Lakoff said, is that "if you just negate what he's saying, you're going to just strengthen him. " In short, "the very fact of repeating a falsehood in proclaiming it as incorrect can actually have the opposite effect in terms of informing the public," the professor said. Trump understands the power of using a tweet or claim "to divert attention, " and journalists can and should outsmart such tactics by giving as little airtime as possible to any false claims, Lakoff said.

@realDonaldTrump. Trump’s Lies vs. Your Brain. All presidents lie. 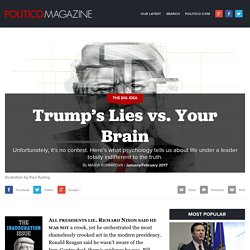 Richard Nixon said he was not a crook, yet he orchestrated the most shamelessly crooked act in the modern presidency. Ronald Reagan said he wasn’t aware of the Iran-Contra deal; there’s evidence he was. Bill Clinton said he did not have sex with that woman; he did, or close enough. Lying in politics transcends political party and era. It is, in some ways, an inherent part of the profession of politicking. But Donald Trump is in a different category. Story Continued Below Those who have followed Trump’s career say his lying isn’t just a tactic, but an ingrained habit. On January 20, Trump’s truthful hyperboles will no longer be relegated to the world of dealmaking or campaigning. What does this mean for the country—and for the Americans on the receiving end of Trump’s constantly twisting version of reality? When we are overwhelmed with false, or potentially false, statements, our brains pretty quickly become so overworked that we stop trying to sift through everything.

Donald Trump's file. R. Reich: How Trump Lies About His Many Lies. This article first appeared on RobertReich.org. 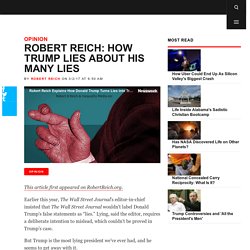 Earlier this year, The Wall Street Journal’s editor-in-chief insisted that The Wall Street Journal wouldn’t label Donald Trump’s false statements as “lies.” Lying, said the editor, requires a deliberate intention to mislead, which couldn’t be proved in Trump’s case. But Trump is the most lying president we’ve ever had, and he seems to get away with it. Try Newsweek for only $1.25 per week Donald Trump delivers his first address to a joint session of the U.S. Here’s his 10-step plan for turning lies into near truths: Step 1: He lies. Step 2: Experts contradict him, saying his claim is baseless and false. 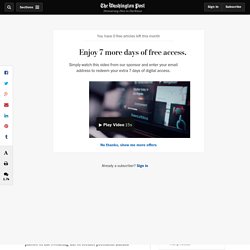 (National Park Service) The National Park Service on Monday released hundreds of ground and aerial photographs that its staff shot of President Trump’s Jan. 20 inauguration. The agency also released photos of the swearing-ins of former president Barack Obama four and eight years ago. And it’s pretty clear that the crowd size at the 45th president’s inaugural was smaller than at the swearing-in of the 44th. The discrepancy is clear in the two photos displayed here, which show the Mall shortly before Obama and Trump were sworn-in around noon eight years apart. A Park Service official said four of the images were forwarded to the White House after Trump made an unusual call to Acting Park Service Director Michael T.