“White supremacists have made it clear that they see Bannon as their advocate in a Trump Administration, which is not only disturbing, but also dangerous for millions upon millions of people in Minnesota and across the country,” he wrote.

“Steve Bannon should not be allowed to hold any position in the White House, let alone one that would allow him to make critical decisions about how our country is run. If he truly seeks to unite America, Donald Trump can start by finding someone else to advise him. And do it immediately.”

Bannon Admits Trump's Cabinet Nominees Were Selected To Destroy Their Agencies. At CPAC this week Stephen Bannon, the Chief Advisor and intellectual heft behind the Twittering infant that sits in the Oval Office, provided a little glimpse of the future he has planned for all of us. 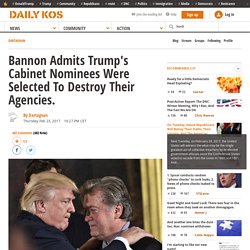 In the clearest explanation for why nearly all of Trump’s cabinet choices are known mostly for despising and attacking the very Federal agencies they’ve been designated to lead, Bannon explained—in very clear language--that they weren't appointed to lead these agencies, but to destroy them: Atop Trump’s agenda, Bannon said, was the “deconstruction of the administrative state” — meaning a system of taxes, regulations and trade pacts that the president and his advisers believe stymie economic growth and infringe upon one’s sovereignty.

“If you look at these Cabinet nominees, they were selected for a reason, and that is deconstruction,” Bannon said. For example, these are the Department of Labor’s core functions: White Supremacy In The White House - Walter Rhett. How odd the role of ideas has become in the new administration! 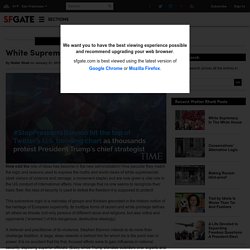 How peculiar they match the logic and reasons used to express the myths and world views of white supremacists (dark visions of violence and carnage, a movement staple) and are now given a vital role in the US conduct of international affairs. How strange that no one seems to recognize their basic flaw: the idea of security is used to defeat the freedom it is supposed to protect!

This subversive logic is a mainstay of groups and thinkers grounded in the historic notion of the heritage of European superiority. Bannon Says Media Should ‘Keep Its Mouth Shut’ WASHINGTON — Stephen K. 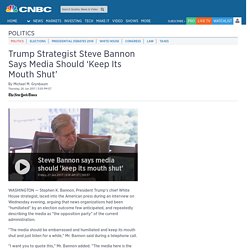 Bannon, President Trump's chief White House strategist, laced into the American press during an interview on Wednesday evening, arguing that news organizations had been "humiliated" by an election outcome few anticipated, and repeatedly describing the media as "the opposition party" of the current administration. "The media should be embarrassed and humiliated and keep its mouth shut and just listen for a while," Mr. Bannon Given Security Role Usually Held for Generals. WASHINGTON — The whirlwind first week of ’s presidency had all the bravura hallmarks of a Stephen K. 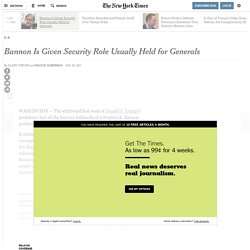 Bannon production. It started with the doom-hued inauguration homily to “American carnage” in United States cities co-written by Mr. Bannon, followed a few days later by his “shut up” message to the news media. The week culminated with a blizzard of executive orders, mostly hatched by Mr. Bannon’s team and the White House policy adviser, Stephen Miller, aimed at disorienting the “enemy,” fulfilling campaign promises and distracting attention from Mr. 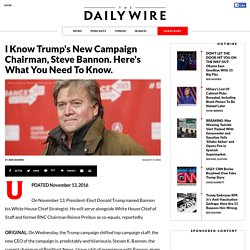 He will serve alongside White House Chief of Staff and former RNC Chairman Reince Preibus as co-equals, reportedly. ORIGINAL: On Wednesday, the Trump campaign shifted top campaign staff: the new CEO of the campaign is, predictably and hilariously, Steven K. Bannon, the current chairman of Breitbart News. Alt Right Rejoices At Trump’s Bannon Hire. As Breitbart’s chief, Steve Bannon did a lot to normalize the racist, anti-Semitic world of the alt right. 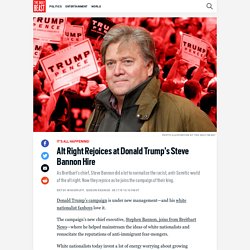 Now they rejoice as he joins the campaign of their king. The campaign’s new chief executive, Stephen Bannon, joins from Breitbart News—where he helped mainstream the ideas of white nationalists and resuscitate the reputations of anti-immigrant fear-mongers. White nationalists today invest a lot of energy worrying about growing Hispanic and Muslim populations in the U.S. Turns out, Breitbart News spends a lot of time worrying about those things, too. And in Bannon, they see a media-friendly, ethno-nationalist fellow traveler. “Latterly, Breitbart emerged as a nationalist site and done great stuff on immigration in particular,” VDARE.com editor Peter Brimelow told The Daily Beast. VDare is a white supremacist site. “It’s irritating because VDARE.com is not used to competition,” Brimelow added. Brimelow isn’t the only prominent white nationalist to praise the Bannon hire. Bannon Calls Women ‘Bunch of Dykes’ On Radio. 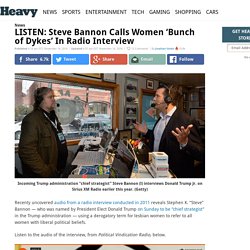 (Getty) Recenty uncovered audio from a radio interview conducted in 2011 reveals Stephen K. “Steve” Bannon — who was named by President Elect Donald Trump on Sunday to be “chief strategist” in the Trump administration — using a derogatory term for lesbian women to refer to all women with liberal political beliefs. Listen to the audio of the interview, from Political Vindication Radio, below. Bannon, 62, was promoting his film Fire From the Heartland: the Awakening of the Conservative Woman. How Trumps New Campaign Chief Created an Online Haven for White Nationalists. Trump’s Campaign CEO Ran a Secretive Sci-Fi Project in the Arizona Desert. C-Span Long before Stephen Bannon was CEO of Donald Trump's presidential campaign, he held a much different job—as the acting director of Biosphere 2, a $200 million scientific research facility in the mountains outside Tucson, Arizona. 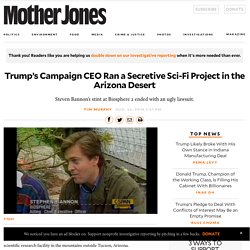 The original Biosphere project, completed in 1991 by a company called Space Biosphere Ventures and funded by a Texas billionaire named Edward Bass, was an attempt to turn science fiction into reality. Eight individuals were to live and work entirely within a series of domed and self-contained buildings, where they would grow their own food, recycle their own waste, and demonstrate that humans might be able to survive in space. But when that two-year experiment ended in disarray—it was overrun by ants and cockroaches—the company turned to a group of outsiders for help in turning it around. At the head of that effort was Bannon. Bannon left Biosphere 2 after two years, and the project was taken over by Columbia University. Combative, Populist Steve Bannon Found His Man in Donald Trump.

‘Working 100 Hours a Week’ Friends at Harvard and later at Goldman Sachs were aware of Mr. 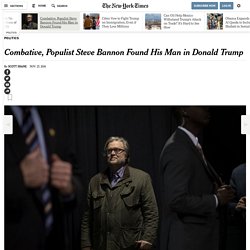 Bannon’s conservative views, but politics was rarely discussed. “He was in mergers and acquisitions, I was in corporate finance, and we were both working 100 hours a week,” said Scot Vorse, who met Mr. Bannon on their first day at Harvard and joined Goldman at the same time. After less than four years, Mr. “We were the underdog,” Mr. Mr. Even as they became successful, Mr. Critics See Bannon as Voice of Racism.

There has been intense jockeying among several of Mr. 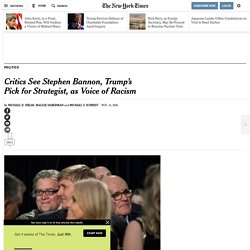 A flood of Democrats in Congress fiercely rejected allowing Bannon to serve in the White House, arguing that Trump’s appointment of a man many have labeled a white supremacist already soils his six-day-old pledge to “be the president for all Americans.” Story Continued Below Bannon “in the White House is a major mistake,” Vermont Sen. Patrick Leahy said. “Instead of bringing the country together, it condones intolerance, hate and disinformation.” 10 Most Despicable Stories Breitbart Published Under Bannon. Written by Milo Yiannopoulos, notorious for using his sexuality as an excuse for his misogyny and racism, this article makes the semi-coherent point that gay men have historically greatly contributed to the arts and sciences, therefore they should go back to pretending to be straight in order to procreate at a better rate.

"An entire generation's worth of artists, playwrights, scientists, and fashion-forward gay BFFs are being mopped up by horrified housekeepers instead of being born," he writes, implying that being gay is like having green eyes, a recessive trait that can be passed through genes – before claiming that same-sex couples are destructive as parents. "Self-hating" doesn't even begin to explain this guy. Is Breitbart.com Becoming the Media Arm of the 'Alt-Right'?