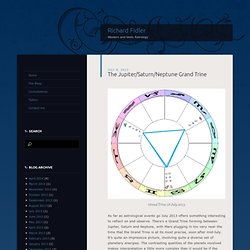 There’s a Grand Trine forming between Jupiter, Saturn and Neptune, with Mars plugging in too very near the time that the Grand Trine is at its most precise, soon after mid-July. It’s quite an impressive picture, involving quite a diverse set of planetary energies. The contrasting qualities of the planets involved makes interpretation a little more complex than it would be if the planets were all or mostly similar. Jupiter and Neptune are both idealistic and, for want of a better word, ‘spiritual’, so there’s some compatibility there; but the other two, Mars and Saturn, are the celestial rogues. The Saturn/Neptune trine has been in effect for some time already, since late May or early June, if we apply a 1 degree orb. It should be understood that there is under no circumstances anything jolly about Saturn combining with Neptune- not even in a Trine! 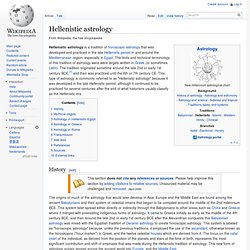 The texts and technical terminology of this tradition of astrology were were largely written in Greek (or sometimes Latin). The tradition originated sometime around the late 2nd or early 1st century BCE,[1] and then was practiced until the 6th or 7th century CE. Hetastrology. Archaeoastronomy. Archaeoastronomy (also spelled archeoastronomy) is the study of how people in the past "have understood the phenomena in the sky, how they used these phenomena and what role the sky played in their cultures. 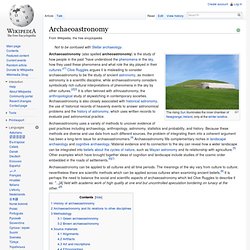 "[1] Clive Ruggles argues it is misleading to consider archaeoastronomy to be the study of ancient astronomy, as modern astronomy is a scientific discipline, while archaeoastronomy considers symbolically rich cultural interpretations of phenomena in the sky by other cultures.[2][3] It is often twinned with ethnoastronomy, the anthropological study of skywatching in contemporary societies.

Zodiac Signs. MINDBLOWING ! COSMIC COUNTDOWN 2013 : Star of David 2013 (working link) - Page 13. The physical kingdom was brought forth by 2 and the spiritual kingdom will be brought together by 2 in the end To bring forth the physical kingdom Adam had to be split to reproduce: Genesis 5: 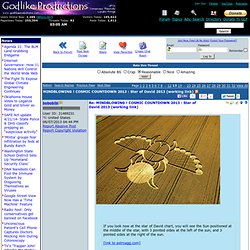 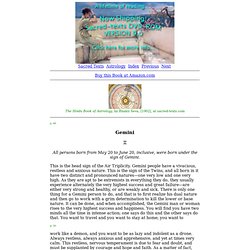 This is the head sign of the Air Triplicity. P. 50 work like a demon, and you want to be as lazy and indolent as a drone. P. 51 this Blessed One, of which everything in the universe, especially You are a part, can help you. You can amass great wealth, have perfect health, and permanent happiness the very moment you begin to live in your higher nature. Give to all beings, especially animals, great love, and try to be kind and gentle to everyone. P. 52 good loving partner as a husband or a wife. Be temperate in all things, especially in eating and drinking, and avoid all foods or drinks which excite or make you restless.

P. 53 you will be a very charming and fascinating person and all persons will dearly love and worship you. P. 54 May 20 to 26. Hindu astrology. Jyotisha (or Jyotish from Sanskrit jyotiṣa, from jyótis- "light, heavenly body") is the traditional Hindu system of astronomy and astrology. 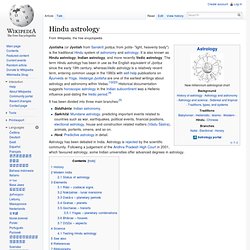 It is also known as Hindu astrology, Indian astrology, and more recently Vedic astrology. The term Hindu astrology has been in use as the English equivalent of Jyotiṣa since the early 19th century, whereasVedic astrology is a relatively recent term, entering common usage in the 1980s with self-help publications on Āyurveda or Yoga. Vedanga Jyotisha are one of the earliest writings about astrology and astronomy within Vedas.[1][2][3] Historical documentation suggests horoscopic astrology in the Indian subcontinent was a Hellenic influence post-dating the Vedic period.[4] It has been divided into three main branches:[5] Astrology has been debated in India. Babylonian astrology. Early origins[edit] Babylonian astrology was the first organized system of astrology, arising in the second millennium B.C.[1] There is speculation that astrology of some form appeared in the Sumerian period in the 3rd millennium BC, but the isolated references to ancient celestial omens dated to this period are not considered sufficient evidence to demonstrate an integrated theory of astrology.[2] The history of scholarly celestial divination is therefore generally reported to begin with late Old Babylonian texts (c. 1800 B.C.), continuing through the Middle Babylonian and Middle Assyrian periods (c. 1200 B.C.).[3] By the 16th century B.C. the extensive employment of omen-based astrology can be evidenced in the compilation of a comprehensive reference work known as Enuma Anu Enlil. 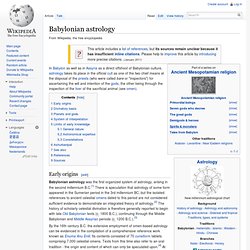 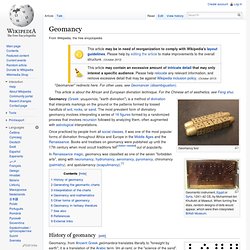 When turning the dials, random designs of dots would appear, which were then interpreted. British Museum. Geomancy (Greek: γεωμαντεία, "earth divination") is a method of divination that interprets markings on the ground or the patterns formed by tossed handfuls of soil, rocks, or sand. The most prevalent form of divinatory geomancy involves interpreting a series of 16 figures formed by a randomized process that involves recursion followed by analyzing them, often augmented with astrological interpretations.

Astrology. Nāga. Naga stone worship at Hampi Nāga (IAST: nāgá, Burmese pronunciation: [naːɡá]) is the Sanskrit and Pāli word for a deity or class of entity or being, taking the form of a very great snake—specifically the king cobra, found in Hinduism, Buddhism, and Jainism. 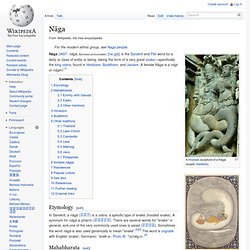