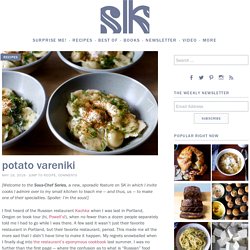 Bring to a simmer and cook, stirring occasionally, until potatoes are cooked through, about 15 minutes. Remove from heat and add butter and a few grinds of black pepper. Mash until very smooth, adjust seasonings to taste, and set aside to cool until needed. You can hurry this along in the fridge. For the luxurious potato filling: Place potatoes in medium saucepan and add as much milk as you need to cover the potatoes. Make the dumpling dough: Combine flour and salt in a large bowl with a fork. You can also make the dough in a stand mixer, using the dough hook to knead for 5 to 7 minutes. Form vareniki, both methods: Grab a spray bottle of water (or a dish of water and a pastry brush, although just your finger is sufficient for hand-formed dumplings), a rolling pin, and liberally dust a rimmed baking sheet with flour. Vegetable dumplings.

In case I haven’t broadcasted this loudly enough in the 114 entries prior to today, I tend to get a little obsessive in the kitchen when trying to find “perfect” recipes. 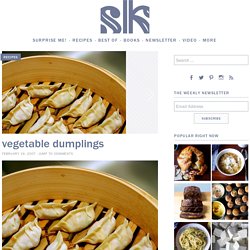 “Perfect” is always some approximation of an ideal that got etched in my tastebuds in some other time and place — there’s salted butter caramel (Paris), bretzel rolls (a Fresh Direct discovery), frisee with poached eggs (Balthazar, 2003) and one day soon, those truffles from La Maison du Chocolat, as my wee Valentine’s Day supply has rapidly diminished. I know better than to try to go back to such a place and expect the same experiences time after time, but it doesn’t mean I can’t have warming fits of nostalgia when I find a lost flavor on my dinner plate.

Case in point today is the steamed vegetable dumplings from Ollie’s, a small chain of large Chinese restaurants up the west side of Manhattan. Soft pretzels, refreshed. Now, I know it has been barely two years since I told you about making miniature soft pretzels at home but according to my calculations, at least three-quarters of you weren’t around back then and that means you might be missing out. 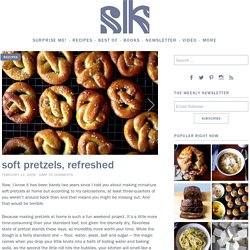 And that would be terrible. Because making pretzels at home is such a fun weekend project. It’s a little more time-consuming than your standard loaf, but given the dismally dry, flavorless state of pretzel stands these days, so incredibly more worth your time. While the dough is a fairly standard one — flour, water, yeast, salt and sugar — the magic comes when you drop your little knots into a bath of boiling water and baking soda, as the second the little roll hits the bubbles, your kitchen will smell like a pretzelrie.

What, no such thing exists? Easiest baked mac-and-cheese. [Note: This got some fresh photos and a few recipe tweaks in 2019.] 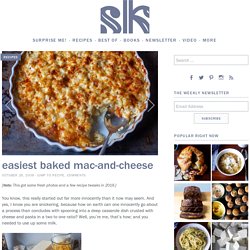 You know, this really started out far more innocently than it now may seem. And yes, I know you are snickering, because how on earth can one innocently go about a process than concludes with spooning into a deep casserole dish crusted with cheese and pasta in a two to one ratio? Well, you’re me, that’s how; and you needed to use up some milk.

The quart of whole milk had been purchased last Saturday with the intention of using it in aforementioned spinach quiche, which, oops, didn’t require any. It’s sat unopened in the fridge since, leaving me the quandary of finding a recipe that used a large quantity of it, as my inner Yiddishe Mama would not allow me to let it go bad, and god knows I am not earnest enough to actually make my morning lattes at home. My first thought was chocolate pudding. Perfect corn muffins. We escaped the Frozen North this week to someplace warm and tropical and it almost feels like cheating. 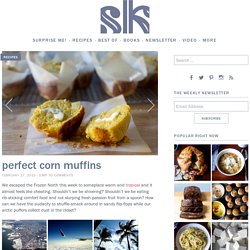 Shouldn’t we be shivering? Shouldn’t we be eating rib-sticking comfort food and not slurping fresh passion fruit from a spoon? How can we have the audacity to shuffle-smack around in sandy flip-flops while our arctic puffers collect dust in the closet? It turns out it’s not so difficult at all. But I’m not here to gloat, promise; I, too, was bone-chilled, quietly resentful of people anywhere that their face didn’t freeze within half a block of their apartment and questioning all of the life choices that had led me to take up residence in such a place just a few days ago. I have been on the hunt for a great corn muffin recipe, well, as long as I can remember.

Cook’s Illustrated understands the value of a great, craggy and bronzed muffin dome. Thank you: For all of your good cheer and kind words about last week’s kind of crazy news. Heat oven to 425°F (220°C). P.S. Related. Even more perfect blueberry muffins. [Get the recipe for Even More Perfect Blueberry Muffins right here] Since we rolled out the redesign, I’ve been flagging recipes in the archives I can’t stand looking at the pictures of anymore with plans to reshoot them. 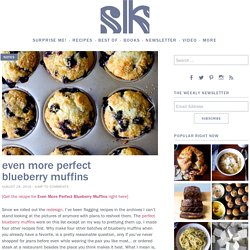 The perfect blueberry muffins were on this list except on my way to prettying them up, I made four other recipes first. Why make four other batches of blueberry muffins when you already have a favorite, is a pretty reasonable question, only if you’ve never shopped for jeans before even while wearing the pair you like most… or ordered steak at a restaurant besides the place you think makes it best. What I mean is, when a lot of people say “but the steak/jeans/cake here are amazing!” Silky, decadent old-school chocolate mousse. Did you hear? 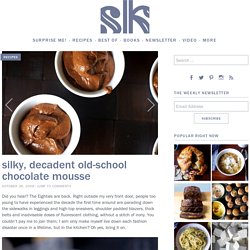 The Eighties are back. Right outside my very front door, people too young to have experienced the decade the first time around are parading down the sidewalks in leggings and high-top sneakers, shoulder padded blazers, thick belts and inadvisable doses of fluorescent clothing, without a stitch of irony. You couldn’t pay me to join them; I aim only make myself live down each fashion disaster once in a lifetime, but in the kitchen? Oh yes, bring it on. Out of nowhere this summer (or perhaps out of the thin air of the 36th week of pregnancy), I began craving that 1980s dessert menu standard, chocolate mousse.

Apple slab pie. In one of my favorite October traditions, we picked too many apples a few weekends ago. 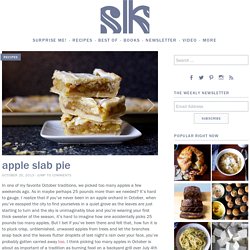 As in maybe perhaps 25 pounds more than we needed? It’s hard to gauge. I realize that if you’ve never been in an apple orchard in October, when you’ve escaped the city to find yourselves in a quiet grove as the leaves are just starting to turn and the sky is unimaginably blue and you’re wearing your first thick sweater of the season, it’s hard to imagine how one accidentally picks 25 pounds too many apples. But I bet if you’ve been there and felt that, how fun it is to pluck crisp, unblemished, unwaxed apples from trees and let the branches snap back and the leaves flutter droplets of last night’s rain over your face, you’ve probably gotten carried away too. I think picking too many apples in October is about as important of a tradition as burning food on a backyard grill over July 4th weekend and going through a whole jar of cinnamon every fall. 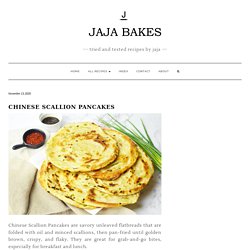 They are great for grab-and-go bites, especially for breakfast and lunch. These Chinese Scallion Pancakes remind me of the breakfast menu I had during my vacation in China. They taste mild because I do not season them with lots of spice. Nonetheless, I love this version better because too many spices can taste overwhelming. These savory pancakes are very versatile to make. Steamed Bao Buns - Jaja Bakes - jajabakes.com. Do you know Steamed Bao Buns? 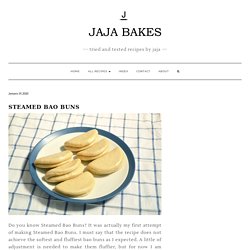 It was actually my first attempt of making Steamed Bao Buns. I must say that the recipe does not achieve the softest and fluffiest bao buns as I expected. A little of adjustment is needed to make them fluffier, but for now I am already satisfied with the result. About Bao Buns Bao buns or 包子 (baozi) literally means steamed buns. Japanese Strawberry Shortcake - Jaja Bakes - jajabakes.com. Moist, light, and fluffy Japanese Strawberry Shortcake recipe for all occasions, made with lightly sweetened whipped cream, sponge cake, and fresh strawberries in each layer. Christmas is coming!!! Finally, 2020 is going to end in less than a month. It’s probably fair to say that this year has been a tough year for most of us. It’s just the year of ambient anxiety with some changes in fundamental routines that we’ve built for ourselves because of the pandemic. Garlic Knots From Scratch - Jaja Bakes - jajabakes.com.

These Garlic Knots are soft, fluffy, and full of buttery garlic flavor and aroma. They are brushed twice to make sure the bread absorbs the delightful savory sauce. Putu Ayu (Steamed Pandan Coconut Cake) - Jaja Bakes - jajabakes.com. The combination of sweet steamed pandan cake and savory grated coconut from Indonesian Putu Ayu will surely satisfy your cravings for sweet desserts and salty treats.

Hi everyone! I am back making another Indonesian traditional dessert. This Putu Ayu is also one of my favorite childhood snacks after Klepon. Cheese Hotteok - Jaja Bakes - jajabakes.com. Cheese Hotteok is popular Korean pancakes with molten cheese inside. Eat these when still fresh and warm from frying to get that irresistible cheese pull. I have been making lots of these pancakes recently after publishing my previous Hotteok recipe.

They are good eaten hot or cold, for breakfast, snack, or dessert. Besides, they are very versatile and all you need is to be creative with the filling as to not get bored with the classic brown sugar-nuts filling. In fact, it can be stuffed with just about anything such as red bean, cheese, vegetables, bulgogi, kimchi, japchae, etc. About Hotteok Hotteok (호떡) is a type of Korean stuffed pancake. The traditional version is chewy, but you can find crispy variations in food stalls throughout different neighborhoods in South Korea. Hotteok Dough This time, I actually substituted some all-purpose flour with glutinous rice flour from the previous Hotteok recipe. Cheese Filling More Korean Snacks Recipes.