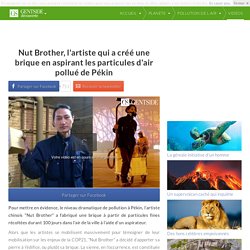 Here’s what China’s epic smog looks like from space. Beijing, China, is having insane smog right now, so heavy that flights and concerts are being canceled. 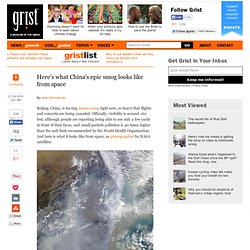 Officially, visibility is around 160 feet, although people are reporting being able to see only a few yards in front of their faces, and small-particle pollution is 40 times higher than the safe limit recommended by the World Health Organization. And here is what it looks like from space, as photographed by NASA satellites: By contrast, here’s what it looked like on a clearer day in early September: Aliens are for sure looking at us and shaking their heads, or whatever, real sadly right now. People in China are beating the smog by sticking cigarette filters in their nostrils. Beijing’s smog is legendarily bad — on some days, stepping outside is kinda like trying to breathe in an ashtray. 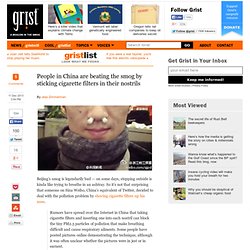 So it’s not that surprising that someone on Sina Weibo, China’s equivalent of Twitter, decided to deal with the pollution problem by shoving cigarette filters up his nose. Rumors have spread over the Internet in China that taking cigarette filters and inserting one into each nostril can block the tiny PM2.5 particles of pollution that make breathing difficult and cause respiratory ailments. Some people have posted pictures online demonstrating the technique, although it was often unclear whether the pictures were in jest or in earnest. “A magical fix for coping with the haze,” said one message that has been repeated many thousands of times on Sina Weibo, a microblog site that is China’s most popular equivalent of Twitter. 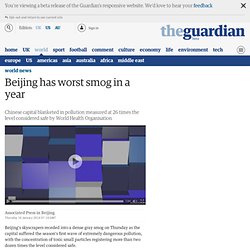 The air took on an acrid odour and many of the city's commuters wore industrial strength face masks as they headed to work. The city's air quality is often poor, especially in winter when stagnant weather patterns combine with an increase in coal-burning to exacerbate other forms of pollution and create periods of heavy smog lasting days. But the readings early on Thursday for particles of PM2.5 pollution were the first of the season above 500 micrograms per cubic metre. The density of PM2.5 was about 350 to 500 micrograms and had reached as high as 671 at 4am at a monitoring post at the US embassy in Beijing. We export carbon emissions to China, get smog back in return. Barack Obama recently warned supporters at a fundraiser that the U.S. will be “four feet under water” if China and India start consuming energy the way Americans do, The New Yorker reports. 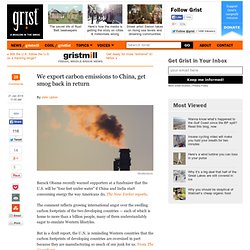 The comment reflects growing international angst over the swelling carbon footprints of the two developing countries — each of which is home to more than a billion people, many of them understandably eager to emulate Western lifestyles. But in a draft report, the U.N. is reminding Western countries that the carbon footprints of developing countries are oversized in part because they are manufacturing so much of our junk for us. From The Guardian: The heavy reliance on coal by China, India, and the like, combined with the transportation of raw materials and finished goods, actually makes the problem of global warming worse than if we had manufactured our own consumer goods.

When China became the world’s workshop, it inherited the world’s air pollution, too. “Good news!” 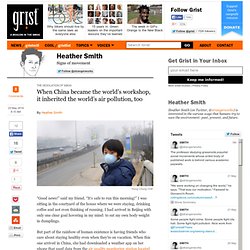 Said my friend. “It’s safe to run this morning!” I was sitting in the courtyard of the house where we were staying, drinking coffee and not even thinking of running. I had arrived in Beijing with only one clear goal hovering in my mind: to eat my own body weight in dumplings. But part of the rainbow of human existence is having friends who care about staying healthy even when they’re on vacation.

The day before, the sky had been gray, and the entire city had felt like smoking a cigarette that we could never put down.