Gunfire ar 1 Year Furguson Mamorial. Darren WIllson. Covert Protest Supression Furgeson. 25 August 2014 (published) Mike Brown’s shooting and Jim Crow lynchings have too much in common. It’s time for America to own up. Not terribly long ago in a country that many people misremember, if they knew it at all, a black person was killed in public every four days for often the most mundane of infractions, or rather accusation of infractions – for taking a hog, making boastful remarks, for stealing 75 cents. 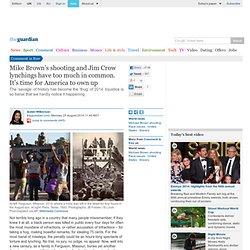 Youtube. Melissa Harris-Perry destroys Time’s Joe Klein’s attempt to malign Michael Brown. How the rest of the world sees Ferguson. In many ways, the chaotic situation in Ferguson, Mo., seems like something that shouldn't happen in America. 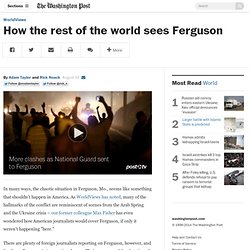 As WorldViews has noted, many of the hallmarks of the conflict are reminiscent of scenes from the Arab Spring and the Ukraine crisis – our former colleague Max Fisher has even wondered how American journalists would cover Ferguson, if only it weren't happening "here. " There are plenty of foreign journalists reporting on Ferguson, however, and for them, Ferguson is international news. Their coverage of the shooting of Michael Brown and the subsequent unrest can offer a refreshing viewpoint on America's many problems.

They can also reveal a lot about how such disturbances are viewed at home. For most Americans, the most familiar foreign news outlets covering Ferguson will probably be the British ones: Not only is there a shared language, but some British outlets, most obviously the Guardian but also the BBC and the Daily Mail, have made big pushes into the U.S. news market. Rand Paul: Scene in Ferguson Resembles "War More Than Traditional Police Action" Mike Brown Tribute Songs. Rep. Hank Johnson to introduce bill to stop providing military equipment to local police forces. The Nebraska State Patrol Light Armored Vehicle LAV 150, one of the hundreds of armored vehicles the Pentagon has passed along to local and state police agencies. 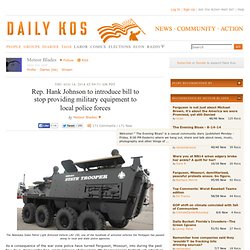 As a consequence of the war zone police have turned Ferguson, Missouri, into during the past few days, Democratic Rep. Hank Johnson of Georgia's 4th Congressional District will introduce a bill to end the federal government's program of providing billions of dollars worth of military equipment free to local police. Anna Palmer and Jake Sherman report: Rep.

Hank Johnson sent a “Dear Colleague” letter Thursday morning alerting lawmakers that he is putting forward the Stop Militarizing Law Enforcement Act. The program began as an amendment to the 1996 military spending bill. As a consequence, police began acting ever more like invading armies, too. You can read about it below the orange tendrils of tear gas smoke. Among the ACLU's findings: 1. Welcome as it is, Johnson's legislation is just a start on what needs to be done. DN! JUAN GONZÁLEZ: We go now to Ferguson, Missouri. 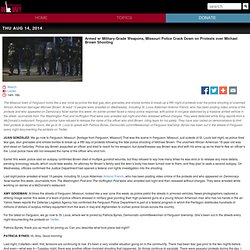 [footage from Ferguson, Missouri] That was the scene in Ferguson, Missouri, just outside of St. Louis last night, as police fired tear gas, stun grenades and smoke bombs to break up a fifth day of protests following the fatal police shooting of Michael Brown. The unarmed African-American 18-year-old was shot dead on Saturday. Police say Brown assaulted an officer and tried to reach for his weapon, but eyewitnesses say Brown was shot with his arms up as he tried to flee an officer’s fire. ‘Overkill’: Images from Ferguson protest show cops treating city like a war zone. By Arturo GarciaWednesday, August 13, 2014 20:01 EDT As demonstrations in Ferguson, Missouri enter their fourth night, pictures and online posts from the scene show an escalation in response from St. 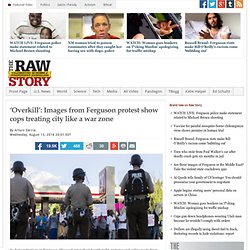 Louis County police. Despite police insisting, “Your right to demonstrate is not being obstructed,” they have brought at least 70 SWAT team officers and one tank to stand opposite the protesters in the street. The Huffington Post reported that state Sen. Maria Chapelle Nadal (D), who criticized the police response in an MSNBC interview on Tuesday night, was taken into custody. This story has been updated. Wednesday’s demonstration is the latest criticizing Ferguson and St. Writer and talk show host Elon James White also posted from the scene, saying at least one more person was arrested. St. Anonymous Releases St. Louis Police Dispatch Tapes From Day of Ferguson Shooting.

Hacktivist group Anonymous is, as promised, making strides in their stated mission to award justice to Michael Brown, his family, the city of Ferguson and victims of police brutality overall. 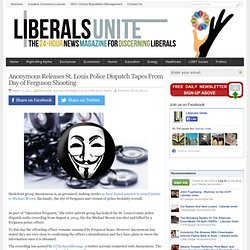 As part of “Operation Ferguson,” the cyber activist group has leaked the St. Louis County police dispatch audio recording from August 9, 2014, the day Michael Brown was shot and killed by a Ferguson police officer. To this day the offending officer remains unnamed by Ferguson brass. However Anonymous has stated they are very close to confirming the officer’s identification and they have plans to tweet the information once it is obtained.