The 250-acre church nurturing faith and free spirits in the foothills of Pennsylvania. Theo Whiddon, center, and other church members sing “Age of Aquarius” during the annual “Stones Rising” gathering last August at the Four Quarters Interfaith Sanctuary in Artemas, Pa., in August 2014. 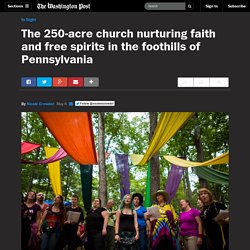 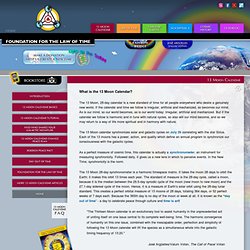 The 13 Moon, 28-day calendar is a new standard of time for all people everywhere who desire a genuinely new world. If the calendar and time we follow is irregular, artificial and mechanized, so becomes our mind. As is our mind, so our world becomes, as is our world today: Irregular, artificial and mechanized. But if the calendar we follow is harmonic and in tune with natural cycles, so also will our mind become, and so we may return to a way of life more spiritual and in harmony with nature. The 13 Moon calendar synchronizes solar and galactic cycles on July 26 correlating with the star Sirius. As a perfect measure of cosmic time, this calendar is actually a synchronometer, an instrument for measuring synchronicity. The 13 Moon 28-day synchronometer is a harmonic timespace matrix.

"The Thirteen Moon calendar is an evolutionary tool to assist humanity in the unprecedented act of uniting itself on one issue central to its complete well-being: time. New Age Frauds & Plastic Shamans. Fertile Ground: A Witch's History Lesson. To me, witches are the quintessential ecofeminists. 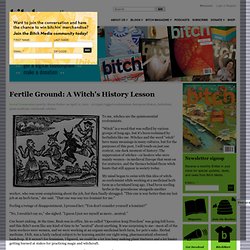 "Witch" is a word that was sullied by various groups of long ago, but it's been reclaimed by herbalists like me. Witches and the word "witch" have many meanings in many cultures, but for the purposes of this post, I will touch on just one context, one dark moment of history: The suppression of witches—or healers who were mainly women—in medieval Europe that went on for centuries, and the themes behind those witch hunts that still appear in society today. My mind began to swim with this idea of witch-as-ecofeminist while working at a medicinal herb farm as a farmhand long ago.

I had been seeding herbs in the greenhouse alongside another worker, who was semi-complaining about the job, but then finally shrugged. "This one is way better than my last job at an herb farm," she said. Feeling a twinge of disappointment, I pressed her; "You don't consider yourself a feminist? " "No, I wouldn't say so," she sighed. Cue heart sinking. Janet Farrar and Gavin Bone – Interview Part 2 Deity and Trance. Part two of this interview series with Janet Farrar and Gavin Bone , guests at Heartland Spirit Festival , this continues from the first portion of our interview. 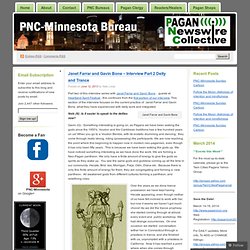 This section of the interview focuses on the current practice of Janet Farrar and Gavin Bone, what they have experienced with deity work and integrated. Janet Farrar and Gavin Bone Nels (N) :Is it easier to speak to the deities now? Gavin (G) : Something interesting is going on, as Pagans we have been waking the gods since the 1950′s. Voudon and the Caribbean traditions has a few hundred years on us! Hecate Photo: wikimedia Over the years as we done trance possession we have kept having Hecate appearing, even though neither of us have felt inclined to work with her, but now it seems we haven’t got much choice!

Janet (J) : The last time it happened in America she turned around and said to Gavin, “Oh God, it’s not you again”. J: She is taking on the role of a psychopomp for trance, quite fascinating. J: Odin is a classic example. Books for the heart and mind. Odinia International & FoxFire. As mead warms, and the eldritch light of foxfire illuminates the dark forest, may our Gods, and this journal, inspire you… The following Odinist journal is in clickable thumbnail format form. 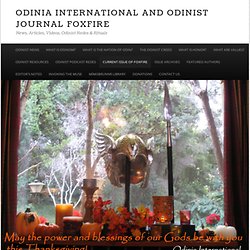 Just click on the photos, including the large ones, to see the articles. Our website may be a bit slow at times, but we are working on it. Waes Hael! To read our previous issues, see our issue archive page. BDO Ritual in Paralympics Closing Ceremony. Click the photo to view a short (5 mins) video of the Druid speeches and other beautiful highlights of the closing ceremony. 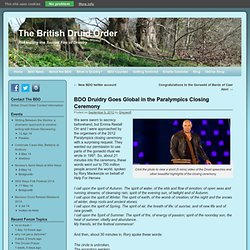 We were sworn to secrecy beforehand, but Emma Restall Orr and I were approached by the organisers of the 2012 Paralympics closing ceremony with a surprising request. They wanted our permission to use parts of the gorsedd ritual we wrote in 1997. So, about 21 minutes into the ceremony, these words went out to 750 million people around the world, spoken by Rory Mackenzie on behalf of Help For Heroes: Pagan. Goddess. The Dark Mother Comes to Help You. Autumn Equinox Drumming-Shamanic Retreat September 28, 29, 30 (Friday Eve - Sunday Noon) Prayers of Transformation with The Dark Mother People have been asking me about the Dark Mother Retreat. 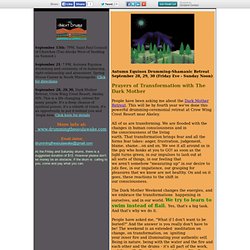 This will be by fourth year we've done this powerful drumming-ceremonial retreat at Crow Wing Crest Resort near Akeley. All of us are transforming. The Veelas. The Veelas, also known as the Vily; the Eastern European name for "the Goddess of energy moving through the earth as nature" They were an ancient Kith long before the Sidhe rose to dominance over western Kithain. 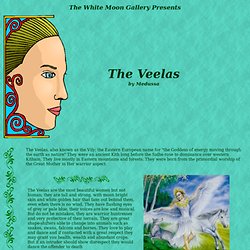 They live mostly in Eastern mountains and forests.

Conference on Current Pagan Studies » Bringing Academia and Community Together.