The meaning of the blank rune. The Blank Rune Also called Wyrd Letter: none Old Norse name: none Flower: purple iris Gem: opal (see below) Number: unknown period of time As I mentioned in the introduction to this section, the use of the Blank Rune in a rune set is the subject of much debate. 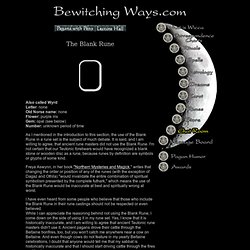 It is said, and I am willing to agree, that ancient rune masters did not use the Blank Rune. I'm not certain that our Teutonic forebears would have recognized a blank stone or wooden disc as a rune, because runes by definition are symbols or glyphs of some kind. Behind the Spells: Magic Aura / Kobold Press. December 16, 2008 / Bret Boyd Behind the Spells: Magic Aura is the second in a series of releases produced for Kobold Quarterly by Tricky Owlbear Publishing, Inc. 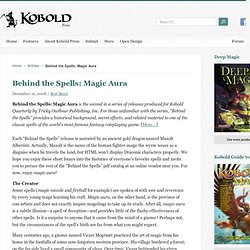 For those unfamiliar with the series, “Behind the Spells” provides a historical background, secret effects, and related material to one of the classic spells of the world’s most famous fantasy roleplaying game. [More...] Each “Behind the Spells” release is narrated by an ancient gold dragon named Maxolt Alberiim. Stardancer's Wheel of the Year. Free Spells, Witchcraft Spells, Wiccan Spells, Wicca Spells, SpellSpot. WitchCrafted. Spells - Purification Spell to break a curse - Breaking a Hex or Curse. This is a "heavy-duty" purification spell. 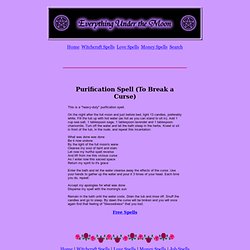 On the night after the full moon and just before bed, light 13 candles, preferably white. Fill the tub up with hot water (as hot as you can stand to sit in). Add 1 cup sea salt, 1 tablespoon sage, 1 tablespoon lavender and 1 tablespoon chamomile. Blessed Litha!!!!!!!! Mystickal Realms Wishes all Members, Staff and Friends who celebrate the Sabbats A Blessed and Happy Litha! 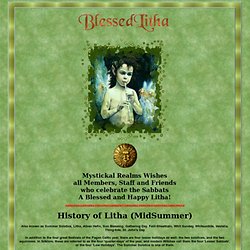 History of Litha (MidSummer) Also known as Summer Solstice, Litha, Alban Hefin, Sun Blessing, Gathering Day, Feill-Sheathain, Whit Sunday, Whitsuntide, Vestalia, Thing-tide, St. John's Day. Bottle Spells and Spell Bottles. A spell bottle is a bottle into which a magical spell has been cast in the form of physical items used to ensure that the spell results in the desired outcome. 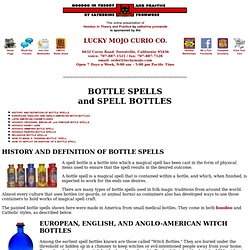 A bottle spell is a magical spell that is contained within a bottle, and which, when finished, is expected to work for the ends one desires. There are many types of bottle spells used in folk magic traditions from around the world. Almost every culture that uses bottles (or gourds, or animal horns) as containers also has developed ways to use those containers to hold works of magical spell craft. The painted bottle spells shown here were made in America from small medical bottles. They come in both hoodoo and Catholic styles, as described below. Among the earliest spell bottles known are those called "Witch Bottles. " In more recent times, the witch bottles of England and Anglo-America have been made from cobalt blue glass and they are often kept on a window sill "for pretty" as well as to keep away witches and the evil eye.

The Pagan History of Easter. Promoting responsibility and integrity within the pagan community, through knowledge and awareness. The Modern Tradition of Witchcraft. The Pagan Chant Library. Neopaganism, Paganism, Neo-Paganism. Google + Neo-Paganism (also spelled Neopaganism and also known as Paganism) is a religion that emphasizes ancient pagan religious traditions and reverence for nature. 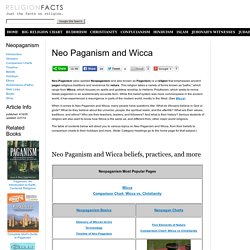 This religion takes a variety of forms known as "paths," which range from Wicca, which focuses on spells and goddess worship, to Hellenic Polytheism, which seeks to revive Greek paganism in an academically accurate form. Shekinah - Wicca. Wicca is a religion that has roots going back to the dawn of man. 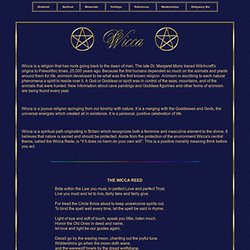 The late Dr. Margaret Murry traced Witchcraft's origins to Paleolithic times, 25,000 years ago. Because the first humans depended so much on the animals and plants around them for life, animism developed to be what was the first known religion. Animism is ascribing to each natural phenomena a spirit to reside over it. S Pagan Parenting Partnership: Pagan Children Stories & Tales. Wiccanrede.htm. Wiccan History. Anon Wicca is a relatively modern attempt (approximately 50 years old) at reviving and reconstructing the old pre-Christian religions of Europe. 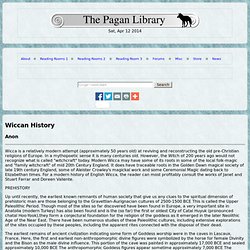 In a mythopoetic sense it is many centuries old. However, the Witch of 200 years ago would not recognize what is called "witchcraft" today. Modern Wicca may have some of its roots in some of the local folk-magic and "family witchcraft" of mid 20th Century England. It does have traceable roots in the Golden Dawn magical society of late 19th century England, some of Aleister Crowley's magickal work and some Ceremonial Magic dating back to Elizabethan times. How To Read the Runes.

How to Read the Runes There are as many different ways to read the runes as there are ways to cast and read any divinatory system. 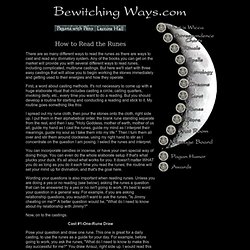 Any of the books you can get on the market will provide you with several different ways to read runes, including complicated, multirune castings. But here we'll start with three easy castings that will allow you to begin working the stones immediately and getting used to their energies and how they operate. First, a word about casting methods. It's not necessary to come up with a huge elaborate ritual that includes casting a circle, calling quarters, invoking deity, etc., every time you want to do a reading. Religion: Interfaith holy days by faith. Rituals & Spells. Religions - Paganism: Pagan weddings. Wiccan Spells That Work! 4.9 out of 5 based on 29 user reviews. 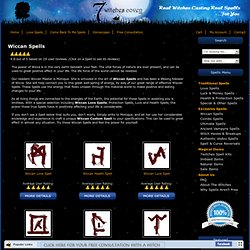 (Click on a Spell to see its reviews) The power of Wicca is in the very earth beneath your feet. The vital forces of nature are ever present, and can be used to great positive effect in your life. The life force of the world cannot be resisted. Our resident Wiccan Master is Monique. Wicca Database. Wicca.gif. As of July 1, 2013 ThinkQuest has been discontinued. We would like to thank everyone for being a part of the ThinkQuest global community: Students - For your limitless creativity and innovation, which inspires us all. Teachers - For your passion in guiding students on their quest. Partners - For your unwavering support and evangelism. Symbol 29:14. I Am A Pagan - Poem about the Pagan Perspective - Selena Fox. I am a Pagan. I am a part of the whole of Nature. The rocks, the animals, the plants, the elements are my relatives. Other humans are my sisters and brothers, whatever their races, colors, ages, nationalities, creeds, or sexual preferences.

You will need: A glass jar A small amount of clean sand A beeswax candle Find a glass jar that you would like to use for your spell (a quart canning jar is a good choice). Place the jar near an entrance door to your home.