Learn Mastering Technique in Free Videos: Limiting, M/S, Dubstep Bass. Audio and production tutorials, from beginner to advanced. Tracker-based music composition tool with VST, ASIO and ReWire support. The time has come to unite the artists once again for a brand new and exciting Chainsong. 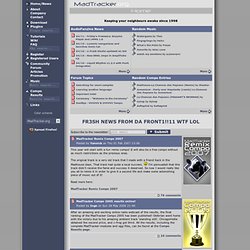 Factor and PyroZane, who are the admins of this project, invite you to join The MadTracker Chainsong 2006! The Chainsong has become one of the biggest events in the MadTracker community. This is the song that everyone talks about during its creation. Crafting New Twisted Tools: A Chat with Reaktor Patchers Making New Sonic Instruments. Ed. 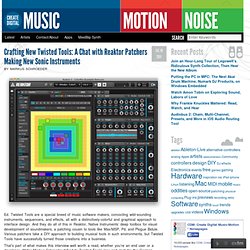 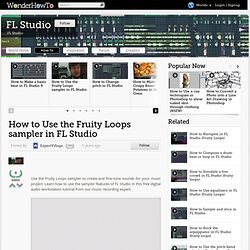 Learn how to use the sampler features of FL Studio in this free digital audio workstation tutorial from our music recording expert. Audio Production Without Limits. We've added dozens of small improvements to help speed your REAPER workflow. 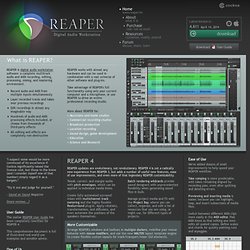 Take comping is more predictable, with takes remaining aligned by recording pass, even after splitting and deleting errors. Previewing and inserting media is easier, because you can highlight, loop, and insert subsections of media files. Switch between different MIDI clips more easily in the MIDI editor. Pool MIDI items so that editing one item edits all pooled copies. Define scales and chords for quickly painting runs and arpeggios. Chain Tape Collective. Top 10 2009 Tutorials About Mixing and Mastering. The covert operators - ableton stuffs. Mixing On Headphones. Technique : Recording / Mixing. 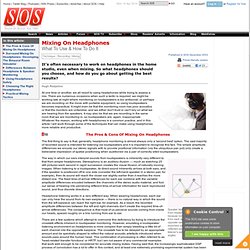 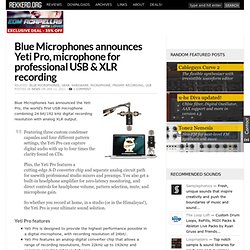 Featuring three custom condenser capsules and four different pattern settings, the Yeti Pro can capture digital audio with up to four times the clarity found on CDs.Plus, the Yeti Pro features a cutting-edge A-D converter chip and separate analog circuit path for usewith professional studio mixers and preamps. You also get a built-in headphone amplifier for zero-latency monitoring, and direct controls for headphone volume, pattern selection, mute, and microphone gain.So whether you record at home, in a studio (or in the Himalayas!)

, the Yeti Pro is your ultimate sound solution. Yeti Pro features The Yeti Pro has a MSRP of $249 USD. Portable home recording with Ubuntu on a netbook. While an Asus EEE PC is perhaps not best suited for full-on intensive music production, it does have values which make it an ideal solution for portable recording. 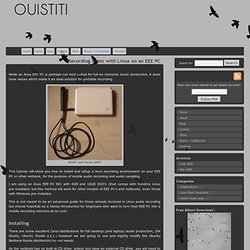 EEEPC and Shure SM57 This tutorial will show you how to install and setup a linux recording environment on your EEE PC or other netbook, for the purpose of mobile audio recording and audio sampling.

Recording. Photosounder.com - Image-sound editor &amp; synthesizer. Quota Top-Up. <p style="background-color:#ffff90;padding: 0em .5em 0em .5em;font-size:.9em"><strong>Warning:</strong> Your browser does not support JavaScript &#8211; RANDOM.ORG may not work as expected</p> Do you own an iOS or Android device? 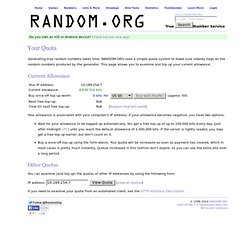 Check out our new app! Generating true random numbers takes time. RANDOM.ORG uses a simple quota system to make sure nobody hogs all the random numbers produced by the generator. This page allows you to examine and top up your current allowance. Current Allowance Your allowance is associated with your computer's IP address. _loch8zBO2q1qb9lruo1_1280. Get The Brain Freeze.

Adventures in sound post production, cloth tracks and all. Tim Walston Special: Reader Questions. Here are the answers to the questions you made to Tim Walston during january. 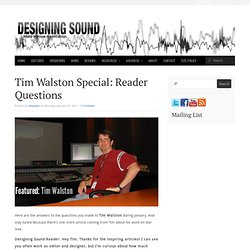 And stay tuned because there’s one more article coming from Tim about his work on Star Trek. Designing Sound Reader: Hey Tim. Thanks for the inspiring articles! Shaktiimart. Journey With Me - ピアノ. Entering the Third Dimension: One Evocative Take on Real-Time Music Creation with a 3D Interface. AudioGL, a project teased in videos first in April and then again last week, is a new concept in designing a user interface for real-time music creation. Visuals and sound alike are generative, with the rotating, 3D-wireframe graphics and symbolic icons representing a kind of score for live synthesized music. The tracks in the video may sound like they’ve been pre-synthesized, polished, and sampled from elsewhere, but according to the creator, they’re all produced in the graphical interface you see – what you see is what you hear.

The newest video, released this week, reveals in detail the project’s notions of how to make a 3D, live music interface work. The UI itself is similar to other graphical patching metaphors, but here, like exploding a circuit diagram in space, routings and parameter envelopes are seen and edited in a freely-rotating view in three dimensions rather than on a flat plane. 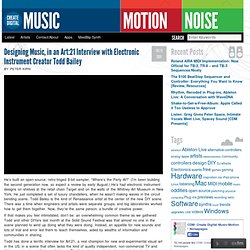 (I’m been building the second generation now, so expect a review by early August.) He’s had electronic instrument designs on shelves at the retail chain Target and on the walls of the Whitney Art Museum in New York. He just completed a set of luxury chandeliers, when he wasn’t making waves in the circuit bending scene. Todd Bailey is the kind of Renaissance artist at the center of the new DIY scene. There was a time when engineers and artists were separate groups, and big laboratories worked how to get them together. From the Trenches of the Loudness Wars, A Broad Survey of Research. This goes to ele—augh, no, aside from over-compressing, we need to stop overusing that joke. Photo (CC-BY) Orin Zebest. You’ve heard the gripes, and heard and seen the somewhat unscientific demos.

Now it’s time to examine the over-compression of music with – science! Earl Vickers of STMicroelectronics examines the Loudness Wars in an academic paper, as noted to us by reader photohounds. Programming Electronic Music in Pd. Abstract Pd was initiated by American software engineer Miller Puckette, who previous co-developed the well known and similarly structured software Max/Msp. Pd is not commercial software; i.e., it was not developed by a corporation and is not for sale. Instead, it is “open source”: its source code is not the (patented) property of a corporation, but is rather freely available to all. One drawback to this is that a detailed operating manual for users who lack programming experience has not existed until now.

In contrast to a corporation— which has a monetary interest in ensuring that first-time users can easily operate new software—the open source movement lacks such a driving force to make itself accessible. This tutorial is designed for self-study, principally for composers. The patches described are available for download.

Building home linux render cluster. Linux Music Workflow: Switching from Mac OS X to Ubuntu with Kim Cascone. Here’s a switcher story of a different color: from the Mac, to Linux. It’s one thing to talk about operating systems and free software in theory, or to hear from died-in-the-wool advocates of their platform of choice. In this case, we turn to Kim Cascone, an experienced and gifted musician and composer with an impressive resume of releases and a rich sens of sound.

This isn’t someone advocating any platform over another: it’s an on-the-ground, in-the-trenches, real-world example of how Kim made this set of tools work in his music, in the studio and on tour. A particular thanks, as he’s given me some new ideas for how to work with Audacity and Baudline. Kim puts his current setup in the context of decades of computer work.

Optimising your PC for audio on Windows 7 .: Focusrite Answerbase. All of the tuning tips below should be implemented if you want to achieve high speed, low latency audio recording and playback without glitches with your audio interface. LMMS - Linux MultiMedia Studio. Music and sound. موسسه موسیقی سهم سیستم.

Forums. Online Schools. The Making of Energy by FOURPLAY. 41 Atalhos para o Ableton « Sound Shiver. Ableton Live 9 – Coming Soon? It’s just a few days out from the 2011 NAMM show, and there’s talk that it may bring the announcement of Ableton Live 9. It’s been almost 2 years since the last major release, giving some substance to the rumor – so, what features might Live 9 bring? According to the official rumor, Live 9 will include: SOUNDMAN OKM II KLASSIK A3 - U.K. International Cyberstore. Cloud. Music Clouds. The #SoundDesign &amp; film-music Daily. Create Digital Music. Create Analog Music: Buchla Love, Visiting the Studio of a Custom Modular Maker. All photos by Marsha Vdovin for CDM. Click for full-sized, gear pr0n versions.

The ‘game’ is a zero-player game, meaning that its evolution is determined by its initial state, requiring no further input from humans. Music Scales - Frequency, Notes, Octaves, Tuning, Scales ... Networkedblogs. Music Generators.