Nisonger.osu.edu/papers/Multifaceted nature of intrinsic motivation.pdf. Table_basic_desires.jpg (2480×3508) The Myths of Intrinsic-Extrinsic Motivation. What happens when a person is offered an incentive to do something the individual would have done anyway, without incentive? Back in 1975 Edward Deci, Mark Lepper, and their colleagues proposed that rewards undermine intrinsic motivation. In contrast, Len Sushinsky and I argued that the effects of rewards depend on how you use them. If you reward a person for just spending time in an activity, the person will become bored with the activity. If you reward a person for learning a new skill, however, the person is likely to show greater interest in the activity. We also asserted the significance of the symbolic effects of the reward.

That was 35 years ago. I believe that intrinsic - extrinsic motivation is an invalid distinction. I question the reliability of behavioral measures of intrinsic interest. Further, I think certain interpretations of the behavior measure have led to circularity and self-fulfilling prophecy. Intrinsic-extrinsic motivation has become a dead end. Measuring Intrinsic Motivation Scientifically. In an earlier post I compared the Deci-Ryan model and the theory of 16 basic desires on the scientific criterion of construct validity. 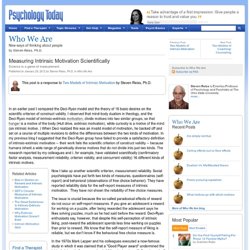 I observed that mind-body dualism in theology, and the Deci-Ryan model of intrinsic-extrinsic motivation , divide motives into two similar groups, so that hunger is a motive of the body (Hull drive, extrinsic motivation), while curiosity is a motive of the mind (an intrinsic motive. ) When Deci realized this was an invalid model of motivation, he backed off and set on a course of multiple revisions to define the differences between the two kinds of motivation. In my previous blog I suggested that the Deci-Ryan group have failed to provide a satisfactory definition of intrinsic-extrinsic motivation -- their work fails the scientific criterion of construct validity -- because humans inherit a wide range of genetically diverse motives that do not divide into just two kinds. 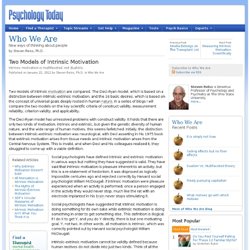 The Deci-Ryan model, which is based on a distinction between intrinsic-extrinsic motivation, and the 16 basic desires, which is based on the concept of universal goals deeply rooted in human nature . In a series of blogs I will compare the two models on the key scientific criteria of construct validity, measurement reliability, criterion validity, and applicability. The Deci-Ryan model has unresolved problems with construct validity. 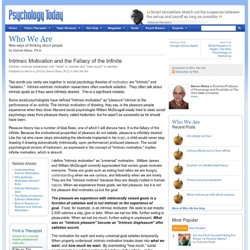