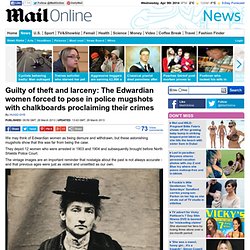 They depict 12 women who were arrested in 1903 and 1904 and subsequently brought before North Shields Police Court. The vintage images are an important reminder that nostalgia about the past is not always accurate - and that previous ages were just as violent and unsettled as our own. Mugshots: Mabel Smith, who was arrested for larceny in September 1903, in a picture released by Tyne & Wear Archives. The final days of Alcatraz revealed in new photographs released for 50th anniversary of prison closing its doors for good.

By James Nye Published: 00:45 GMT, 22 March 2013 | Updated: 16:58 GMT, 22 March 2013 Fifty-years-ago today, Alacatraz, the most secure prison and symbol of American justice across the nation closed down for good - heading into its retirement as a tourist hot-spot and Hollywood film set. 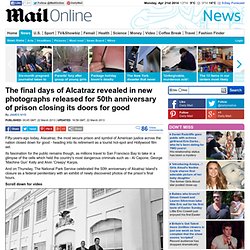 Its fascination for the public remains though, as millions travel to San Francisco Bay to take in a glimpse of the cells which held the country's most dangerous criminals such as - Al Capone, George 'Machine Gun' Kelly and Alvin 'Creepy' Karpis. And on Thursday, The National Park Service celebrated the 50th anniversary of Alcatraz Island's closure as a federal penitentiary with an exhibit of newly discovered photos of the prison's final hours. Scroll down for video In this March 21, 1963 photo taken by Leigh Wiener and provided by the National Park Service, prison guard Jim Albright, (second from left), leads out the last prisoners from Alcatraz federal penitentiary U.S. Last desperate letters of 19th century mass-poisoner known as the Black Widow before she was executed. Mary Ann Cotton hanged in 1873 for killing stepson, but had 21 total victimsShe was Britain's biggest serial killer before 'Dr Death' Harold ShipmanEight letters and a victim's bible will be sold at auction next Wednesday By Martin Robinson Published: 16:00 GMT, 22 February 2013 | Updated: 23:00 GMT, 22 February 2013 Infamous: Letters belonging to Black Widow killer Mary Ann Cotton, who was hanged in 1873 for murdering her seven-year-old stepson Charles, will go on sale next week A set of desperate letters penned by a 19th Century poisoner known infamously as the 'Black Widow' before she was executed will be sold at auction next week. 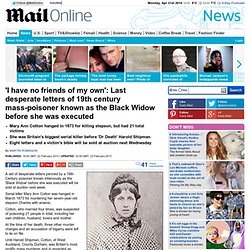 Serial killer Mary Ann Cotton was hanged in March 1873 for murdering her seven-year-old stepson Charles with arsenic. Britain's worst ever serial killer: The Victorian angel of death that murdered 400 babies. Amelia Dyer is believed to be Britain's worst ever serial killerShe started her murderous career in Bristol before moving to ReadingOffered a fostering services but simply murdered the helpless infants By Daniel Miller Published: 13:40 GMT, 23 February 2013 | Updated: 19:49 GMT, 4 March 2013 She was dubbed the 'Angel Maker', a prolific serial killer responsible for the murders of around 400 babies, horrific crimes that sent a shock wave through 19th century Britain. 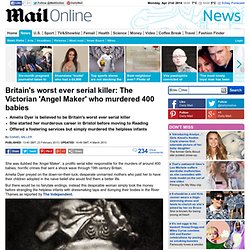 Amelia Dyer preyed on the down-on-their-luck, desperate unmarried mothers who paid her to have their children adopted in the naive belief she would find them a better life. But there would be no fairytale endings, instead this despicable woman simply took the money before strangling the helpless infants with dressmaking tape and dumping their bodies in the River Thames as reported by The Independent. Is there a black sheep in your family's past? Now you can find out as old crime records are put online. More than 2.5million records from 1770 to 1934 to become availableLets people search for villains in their family tree for first timeMany contain letters of appeal written by friends and relatives. 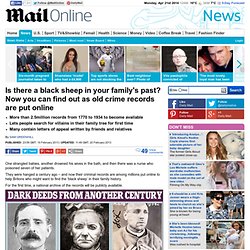 First-ever criminal mugshots taken in Britain revealed 150 years on featuring thieves, thugs and a conman who impersonated a vicar. Mugshots were created because written descriptions were unreliablePictures of Bedford Prison inmates offer glimpse into 'working class life' By Anna Edwards Published: 13:52 GMT, 12 February 2013 | Updated: 00:33 GMT, 13 February 2013 Before the digital camera was ubiquitous, photographs were such a rarity that people used to dress in their finery for their snapshots. 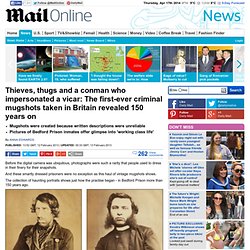 Move over the Krays! Violence... extortion... the East End twins were pussycats compared to the London underworld of the past. By Christopher Stevens Published: 00:51 GMT, 9 August 2012 | Updated: 07:12 GMT, 9 August 2012 Scary: The London underworld of the past was a violent place As dusk fell, the sound of pursuing hooves and the fleeting shadows of six horsemen sent shudders of fear through the nobleman and his lady. 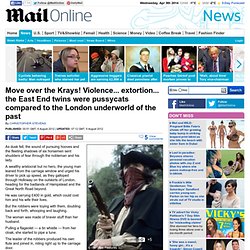 A wealthy aristocrat but no hero, the young man leaned from the carriage window and urged his driver to pick up speed, as they galloped through Holloway on the outskirts of London, heading for the badlands of Hampstead and the Great North Road beyond. He was carrying £400 in gold, which could cost him and his wife their lives. But the robbers were toying with them, doubling back and forth, whooping and laughing. The woman was made of braver stuff than her husband. Pulling a flageolet — a tin whistle — from her cloak, she started to pipe a tune. The Who's Who of criminals from 1909: Police scrapbook features smartly dressed rogues from 100 years ago asdfa sdfasdf as. 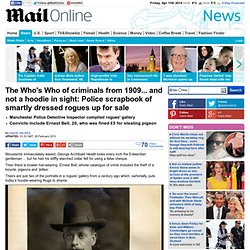 Then there is bowler-hat-wearing Ernest Bell, whose catalogue of crime included the theft of a bicycle, pigeons and ‘jellies’. Theirs are just two of the portraits in a rogues’ gallery from a century ago which, sartorially, puts today’s hoodie-wearing thugs to shame. The 'mugshot scrapbook' lists George Archibald Hewitt as using a false cheque. Rogues' gallery of Fagin's children: Mugshots of Victorian criminals shows thieves as young as 11 who were jailed for stealing clothes, cash and metal.

By Chris Parsons and Amy Oliver for The Mail on Sunday Published: 02:25 GMT, 27 June 2012 | Updated: 12:41 GMT, 27 June 2012 Staring into the camera, some with defiance and others in child-like wonder, these scruffy boys and girls look like any other group of Victorian urchins. 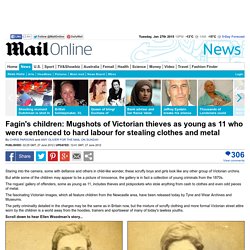 But while some of the children may appear to be a picture of innocence, the gallery is in fact a collection of young criminals from the 1870s. The rogues' gallery of offenders, some as young as 11, includes thieves and pickpockets who stole anything from cash to clothes and even odd pieces of metal. The fascinating Victorian images, which all feature children from the Newcastle area, have been released today by Tyne and Wear Archives and Museums. NSW Justice & Police Museum Archives website. The forensic photography archive within the Justice & Police Museum was originally created by the New South Wales Police between 1912 and 1964. 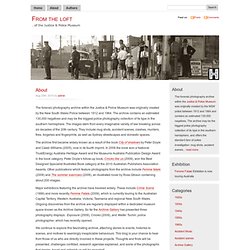 The archive contains an estimated 130,000 negatives and may be the biggest police photography collection of its type in the southern hemisphere. The images stem from every imaginable variety of law breaking across six decades of the 20th century. They include mug shots, accident scenes, crashes, murders, fires, forgeries and fingerprints, as well as Sydney streetscapes and domestic spaces. The archive first became widely known as a result of the book City of shadows by Peter Doyle and Caleb Williams (2005), now in its fourth imprint. In 2006 the book won a National Trust/Energy Australia Heritage Award and the Museums Australia Publication Design Award in the book category. Major exhibitions featuring the archive have traveled widely. Pictures catalogueView more images from the collection.

Amazing police photos of 1920s criminals arrested in Australia. By Wil Longbottom Updated: 07:34 GMT, 8 June 2011 Wearing top hats and waistcoats and staring fixedly back at the camera, these men could have been posing for a family snapshot. But these amazing images from the 1910s to 1930s are actually police mugshots taken of convicted criminals arrested in Australia. Women's mug shots from 1920s Australia. By Daily Mail Reporter Updated: 20:50 GMT, 21 February 2012 They were some of Australia's shadiest sheilas. Murderers, bigamists, cocaine dealers and back street abortionists, all manner of vampish villain and fallen floozy scooped off the streets and photographed for police files. Their blank expressions hiding a catalogue of appalling crimes.