Twitter. [60 fps] Laborers in Victorian England, 1901. BabelColour □ sur Twitter : "Colour films are insanely rare in the 1920s, which makes this 26-part travelogue of the UK exceptional. Filmed in 1924 by Claude Friese-Greene using his father's colour process invention, I've edited a preview for Twitter, but. Five Newhaven fisherwomen in 1844, a salted paper print from a paper negative. An image from the dawn of photography by David Hill (1802-1870) and Robert Adamson (1821-1848).…

Other work by the Ladybird artists, part 47. ‘The Village of Shilton’ #SRBadmin (This painting was used as a Reader’s Digest cover picture in the 1970s)… Postman moving the mail by basket on Gourock Promenade, 1938. No image credit. Joe Gudgeon Photography sur Twitter : "Dolly Birds...The lady on the right said “You can take our picture as long as you caption it Dolly Birds.” Consider it done. @HarrisPreston @Gillylancs @BBCNWT @CharlesQuick @1854 @SirWilliamD @PR1markettrader @North.

Look at these photos by @tonyothen. Blimey! Tim Dunn sur Twitter : "I think Ian Nairn might like Settle even more, now. “The buildings... the way they huddle up; crowd together... keeping the wind out. It’s v well looked after, apart from main road traffic, which cld be got rid of easily”. The A65. Kathryn Ferry sur Twitter : "There is so much detail in this Francis Bedford photograph of #Sidmouth #beach in the 1870s. The man up a ladder is painting the #bathingmachine far right and the strange patches of dark and white on the pebbles are towels and.

Robin Weaver sur Twitter : "Two scans from my #1980s neg files taken on the same day in the Rhondda Valley, #SouthWales 1. Kids enjoying iced lollies in Trehafod 2. Victoria Stores in Ton Pentre. I wonder if this is still there? #documentingsouthwales @sw. Davenant sur Twitter : "A man walks towards the steelworks in Hartlepool in 1963 by Don McCullin. Industrial scenes like this had a grim majesty to them. I love everything about this photo, it is a masterful capture of a bygone age.…

Reece Dinsdale sur Twitter : "A few years ago I purchased this magnificent photograph by Frank Meadow Sutcliffe of fishermen and their families in Victorian Whitby. Always wanted to make a big seafaring movie of what I imagined all their lives would be. I. Mik Critchlow sur Twitter : "Saturday's Scans - just rediscovered a pile of negatives made in Scarborough in 1982 while looking for other images. My eldest daughter in her mothers' arms - she's now 38 years old! Going to be a busy weekend I think. #britis.

Bikes park near an arched stone bridge above bathers enjoying the water on Arran Island, Scotland, July 1965.Photograph by Robert Sisson… Sweet Springtime, England 1894. Photo by Ralph Winwood Robinson.… I love Geoff Butterworth’s art. I find it comforting. This one is titled ‘’ View from a Train 1970’ Rochdale. Enough washing lines to satisfy us all!… Shocking before and after shot...… #OTD 1959: John Tidmarsh reported that penny slot machines would soon cost threepence. (We seem to have lost his voiceover, but the footage is still evocative without it)… Milk cartons: 25 February 1937. Acclaimed actor Tom Courtenay was born in Hull. Films include Billy Liar and Doctor Zhivaho.… Shell gas, England, 1935.…

History□□1960s: suburban parade!............when a different breed of housewife, shop & motorcar prevailed.… Early morning, West Hartlepool, County Durham 1963 by Don McCullin… Eastgate Street, #Chester 1961 (Charles W Cushman )… History□□WWII: the “mock” mock tudor!....................a time when the briton added the personal, domestic touch, when faced with continual chaos & carnage, 1940.… Streets in the sky … the Sheffield high-rises that were home sweet home. Bill Stephenson had been trying to photograph the residents of one of Sheffield’s most notorious housing estates for some time when he realised he was going about things all wrong. 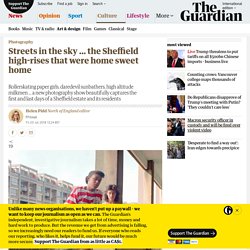 No one trusted him, this outsider with a southern accent and a fancy camera, parachuting in from the city’s leafy Nether Edge area. They didn’t appreciate him hanging around Hyde Park, snatching photographs of them as they went about their lives amid the brutalist concrete they called home, perched on the hill above Sheffield railway station. He started to leave his posh Billingham bag at home.

His Hasselblad, worth thousands, went in a carrier bag with a towel at the bottom to protect it. Sometimes he never even took it out. Boys on bikes in the mining village of Holmewood, Derbyshire, 1973. Photo Don McPhee… The Glasgow train stands outside Fort William Station in August 1959. [Colour-Rail]… The junction of Steep Steet and Trenchard Street in Bristol, 1866.… 1900 Victorian Time Machine - Extended Ride Through Town in England (speed corrected w/ added sound)

October 1930 A section of the Villa Park crowd that watched #AVFC draw 1-1 with rivals Birmingham City #bcfc #kro. 'When I was at St Mirren it was a desolate place. Even the birds woke up coughing.' (Alex Ferguson) A fantastic photo collection of shearing day in Hafod y Llan, 1951. Margate 1934. . . . . . One of the most magnificent images in the @NatGalleriesSco collection, Alfred G. Buckham's Aerial view of Edinburgh. Nottingham Forest's City Ground, August 1980. (Photo: Duncan Raban/Allsport/Getty)

24 Stunning Kodachrome Photos Documented Everyday Life of Britain in the early 1950s. Do you remember going to the telephone box to make phone calls with your 2p coins? 25 September 1953, Frankley Green, Birmingham. #Nicklin, Phyllis. *****Chester in the 1920's vs 2017 (Drivers of change) *****Whitstable harbour - A day in the life, Kent. Estuarial towns are an architectural utopia, says Jonathan Meades. Utopia dons some unlikely guises, crops up in some odd places. 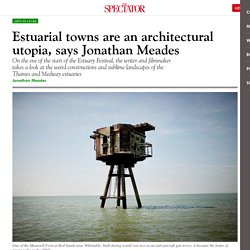 On the sea wall a couple in their teens stood clutching their baby and gazing half a mile across the opaque river to where streets run down to the shore: spires and warehouses, inns and gables announced a town. The boy asked me if I knew over there. He said that that was where they wanted to go to, where they wanted to be. There’s so much happening over there. Not like here. On the other side of the water was hope. The kids put their child in a buggy, nodded farewell, went away to dream.

The first colour photographs of England - Travel. Lost Glasgow: The Changing Face of Charing Cross – National Library of Scotland Blog. Earlier this year plans were unveiled to cover a stretch of the M8 motorway at Glasgow’s Charing Cross – to ‘heal the wound’ (as the Herald calls it) opened up in the city as the road was constructed in the 1960s. 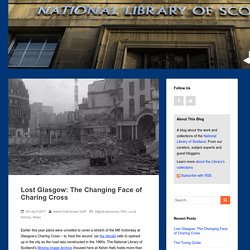 The National Library of Scotland’s Moving Image Archive (housed here at Kelvin Hall) holds more than 1500 films of Glasgow – including several of the Charing Cross area. The M8, arguably the defining piece of infrastructure in Glasgow, cuts the city in two as defiantly as the Clyde. Let’s take a look, then, at the development of Charing Cross – with the help of the Library’s digital collections. Taking Shape. #OTD 1976: Egon Ronay's guide to transport cafes was published. It described accommodation at many as akin to "neo-Dickensian doss houses" #ChangingPlaces #NewTowns #urban #regeneration #rebranding #CBD #Coventry #geographyteacher Recent impact of Resorts World Birmingham? 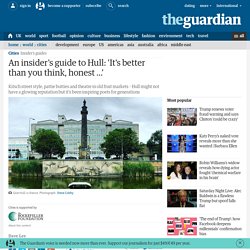 If you're teaching either Globalisation or Changing Places at A level, this is a must-have #geographyteacher. 'An embarrassment to the city': what went wrong with the £725m gateway to Cambridge? “A remarkable opportunity,” is how architect Richard Rogers described his £725m vision to design an entirely new gateway to Cambridge. 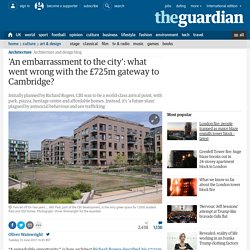 Twelve years on, the result has been called “rubbish”, “unfit” and “soulless” by local residents, not to mention being accused of “designing in crime”, after a rise in antisocial behaviour and a wave of “pop-up brothels”. Visitors arriving by train are now greeted with a generic clone-town scene more like a suburban retail park than an illustrious seat of learning. Reconstituted stone fins line the front of a broad, bland office building, presenting a beige frontage of Pret, Costa and Wasabi outlets to the new station square. The insipid facade of a squat Ibis hotel frames its other side, looking on to a public space seemingly designed more with cars than people in mind.

For somewhere that markets itself as “the best small city in the world”, it is a disappointing welcome. Beach Party, Tata Steelworks, Port Talbot, Glamorgan. #ukcoastwalk. #OTD 1971: Nationwide visited the first smokeless pub in the UK. Smokeless pub?! For goodness sake, what next? Smokeless buses? #OnThisDay1959: Essex police confiscate an array of weapons that would make fans of @RockstarGames GTAV blush! 1945/1981/2009 - Passage of time at Broadwell WWII Hospital, Oxfordshire countryside. First casualties arrived from D-Day N.France 07.06.44.

*****Durham 1971: School kids line for lunch, Cottage cheese and pineapple, Should satisfy them. #NationalPoetryDay. *****Photo of John Berry's model for The Fireman People at Work Series @MrTimDunn @LBFlyawayhome @Grindrod #ladybirdbooks. Extreme #changingplaces ! Hastings, E Sussex: WW1 submarine with a hull number of U-118 was found washed ashore on the beach at Hastings, Sussex, England, 1919. Women painting propaganda posters, 1942. Tax avoidance, 17th century style. The Bridge House, Ambleside - built on a river between two jurisdictions. 24 Stunning Kodachrome Photos Documented Everyday Life of Britain in the early 1950s. WWII Bomb Drill, UK. Sheep graze at Stoke City's Victoria Ground...shortening the grass before the start of 1963/64 season. (PA Photos) Children wearing gas masks while playing, 1941. *****Dreamland, Margate, Kent: Such is life. Doncaster: This is a grotty card but it was the only one in the shop.

*****Chester in the 1920's vs 2017. #OTD 1950: Can British Electricity keep up with demand? The tension in this clip is unbearable! Canterbury, Kent: S.T. Abbott Ltd built Hallets car/bike showroom and petrol station in 1952, Station Road West, Canterbury #celebrating70years. Robert Frank #photography Caerau, Wales, 1951. *****Before alarm clocks: PHOTO OF THE DAY: A 'Knocker Up". He was paid to wake people up in the morning (1900). July 1936 and SR transports stock via rail to #Woolworths stores nationwide. #S.R. Southern Railway Magazine Vol XIV No.163.