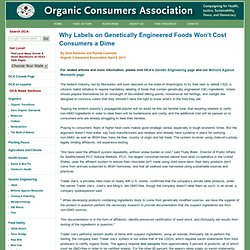 The biotech industry, led by Monsanto, will soon descend on the state of Washington to try their best to defeat I-522, a citizens’ ballot initiative to require mandatory labeling of foods that contain genetically engineered (GE) ingredients. Voters should prepare themselves for an onslaught of discredited talking points, nonsensical red herrings, and outright lies designed to convince voters that they shouldn’t have the right to know what’s in the food they eat. Topping the biotech industry’s propaganda playlist will no doubt be this old familiar tune: that requiring retailers to verify non-GMO ingredients in order to label them will be burdensome and costly, and the additional cost will be passed on to consumers who are already struggling to feed their families. How does the affidavit system work? Is the system reliable? How to avoid GM foods. Just say no to those GMOs! 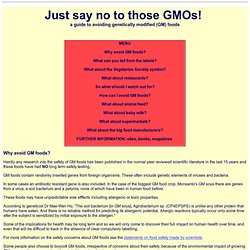 A guide to avoiding genetically modified (GM) foods Why avoid GM foods? Hardly any research into the safety of GM foods has been published in the normal peer reviewed scientific literature in the last 15 years and these foods have had NO long term safety testing. GM foods contain randomly inserted genes from foreign organisms. These often include genetic elements of viruses and bacteria. In some cases an antibiotic resistant gene is also included. Non-GMO Shopping Guide. (27) Timeline Photos. (3) Facebook. What you don't know can hurt you. General Mills Gets a Taste of the Backlash. By Dr. Mercola Organic foods are required by U.S. federal law to be produced in ways that promote ecological sustainability, without common toxic and genetically engineered ingredients. But organic products are increasingly being forced to compete with products that are labeled as "natural. " There are no restrictions on the term "natural", and it often constitutes nothing more than meaningless marketing hype.

Genetically Modified Food. Genetically Altered Foods. "Recombinant DNA technology faces our society with problems unprecedented not only in the history of science, but of life on Earth. 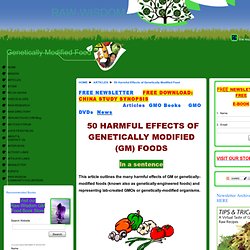 It places in human hands the capacity to redesign living organisms, the products of three billion years of evolution. Such intervention must not be confused with previous intrusions upon the natural order of living organisms: animal and plant breeding...All the earlier procedures worked within single or closely related species...Our morality up to now has been to go ahead without restriction to learn all that we can about nature. Restructuring nature was not part of the bargain...this direction may be not only unwise, but dangerous. Potentially, it could breed new animal and plant diseases, new sources of cancer, novel epidemics. " Round Up Ready Herbicide Found to be Carcinogenic. By Dr. 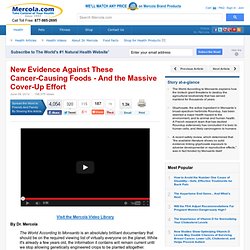 Mercola The World According to Monsanto is an absolutely brilliant documentary that should be on the required viewing list of virtually everyone on the planet. While it's already a few years old, the information it contains will remain current until we stop allowing genetically engineered crops to be planted altogether. The film explains how the biotech giant Monsanto threatens to destroy the agricultural biodiversity that has served mankind for thousands of years. I must warn you though; it may bring tears to your eyes as you learn how they have decimated so many lives and part of the environment through their morally bankrupt behavior.

The Biotech Weblog: Kellogg Will Use Monsanto's Low Linolenic Soybean Oil. » Safety Group Blows Lid on ‘Secret Virus’ Hidden in GMO Crops Alex Jones. Anthony Gucciardi Infowars.com Feb 7, 2013 Yet another disturbing reason has emerged as to why you should be avoiding health-devastating genetically modified organisms, and it may be one of the most concerning yet. 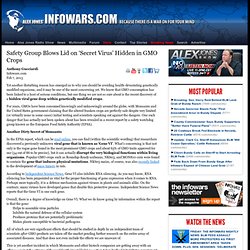 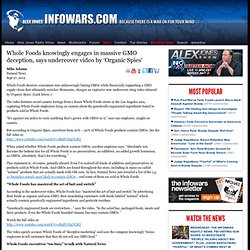 (Link below.) The video features secret camera footage from a dozen Whole Foods stores in the Los Angeles area, capturing Whole Foods employees lying on camera about the genetically engineered ingredients found in products sold at Whole Foods. “It’s against our policy to carry anything that’s grown with GMOs in it,” says one employee, caught on camera. But according to Organic Spies, anywhere from 20% – 30% of Whole Foods products contain GMOs. When asked whether Whole Foods products contain GMOs, another employee says, “Absolutely not. This statement is, of course, patently absurd.

» Why Do Supporters of Genetically Engineered Foods Insist on Organics for Their Own Families? Alex Jones. Dr. 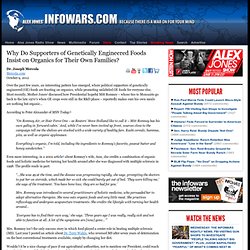 Joseph MercolaMercola.com October 9, 2012 Over the past few years, an interesting pattern has emerged, where political supporters of genetically engineered (GE) foods are feasting on organics, while promoting unlabeled GE foods for everyone else. Most recently, Mother Jones1 discussed how Presidential hopeful Mitt Romney – whose ties to Monsanto go back to the late 1970′s when GE crops were still in the R&D phase – reportedly makes sure his own meals are nothing but organic… According to Peter Alexander of MSN Today:2 “On Romney Air, or Hair Force One – as Reuters’ Steve Holland like to call it – Mitt Romney has his own galley in ‘forward cabin.’

Everything’s organic, I’m told, including the ingredients to Romney’s favorite, peanut butter and honey sandwiches.” Even more interesting, in a 2002 article3 about Romney’s wife, Ann, she credits a combination of organic foods and holistic medicine for turning her health around after she was diagnosed with multiple sclerosis in 1998. Mrs. » GM Mutant Cows to Produce ‘Engineered Milk’ for Babies Alex Jones. Breaking! 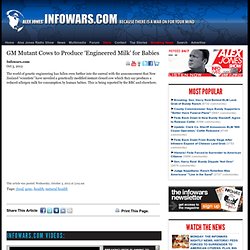 Feds Planning To Raid Bundy Ranch Americans Draw Line in Sand Reid Wants Bundy to Pay Up American Citizens Draw Red Line: Feds Back down We Must Stand Up Against Tyranny. Source on Genetically Modified Crops. Monsanto found guilty of chemical poisoning in landmark case. (NaturalNews) A French farmer who can no longer perform his routine farming duties because of permanent pesticide injuries has had his day in court, literally, and the perpetrator of his injuries found guilty of chemical poisoning. 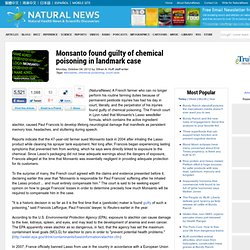 The French court in Lyon ruled that Monsanto's Lasso weedkiller formula, which contains the active ingredient alachlor, caused Paul Francois to develop lifelong neurological damage that manifests as persistent memory loss, headaches, and stuttering during speech. Reports indicate that the 47-year-old farmer sued Monsanto back in 2004 after inhaling the Lasso product while cleaning his sprayer tank equipment. Not long after, Francois began experiencing lasting symptoms that prevented him from working, which he says were directly linked to exposure to the chemical. According to the U.S. Environmental Protection Agency (EPA), exposure to alachlor can cause damage to the liver, kidneys, spleen, and eyes, and may lead to the development of anemia and even cancer. 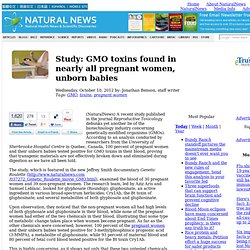 According to an analysis conducted by researchers from the University of Sherbrooke Hospital Centre in Quebec, Canada, 100 percent of pregnant women and their unborn babies tested positive for GMO toxins in their blood, proving that transgenic materials are not effectively broken down and eliminated during digestion as we have all been told. The study, which is featured in the new Jeffrey Smith documentary Genetic Roulette ( examined the blood of 30 pregnant women and 39 non-pregnant women. The research team, led by Aziz Aris and Samuel Leblanc, looked for glyphosate (Roundup); gluphosinate, an active ingredient in various broad-spectrum herbicides; Cry1Ab, the Bt toxin of gluphosinate; and several metabolites of both glyphosate and gluphosinate. Natural brands betray consumers over GMO labeling: NaturalNews issues boycott of Kashi, Silk, Larabar and more.

(NaturalNews) It's time to defeat evil in the food industry and stop the vicious betrayal of consumers by so-called "natural" brands. Genetically modified crops safety assessments: present limits and possible improvements. Need for chronic tests and other tests Chronic toxicity tests (both with males and females) and reproductive tests with pregnant females and then with the developing progeny over several generations (none of these steps exist at present) are called as a whole the Toxotest approach (or Risk management test, see "Details on the new suggested Toxotest approach"). This could address the long-term physiological or pathological relevance of the previous observations.

Results for Tag:Genetically Modified Crops on OtherWords. Haitians burn 400 tons of Monsanto donated seed - Digits's column on Newsvine. Bhutan To Be First Country to Go 100% Organic. If there was ever a nation that could see the purpose behind organic, sustainable farming, it would be a nation that is composed mostly of farmers. Russian Biologists: GMO foods cause sterility in third generation. Editor's Note: From time to time we come across articles mentioning animal studies. We see these studies receiving attention in the media, and we see government bodies sometimes basing nutritional policy on such work, at least in part. Because this kind of information is being discussed in the public sphere, we bring it to our readers so you may be informed. South Korea joins Japanese ban on U.S. wheat imports after shocking GMO contamination announcement by USDA. » France Launches Major Investigation Into GMOs Following Tumor Study Alex Jones.

AgendaOn October 22 from 8 a.m. to 5:30 p.m. and on October 23 from 8 a.m. to approximately 11:15 a.m. the Committee will discuss oocyte modification in assisted reproduction for the prevention of transmission of mitochondrial disease or treatment of infertility. On October 23 from approximately 11:15 a.m. to 11:30 a.m. the Committee will hear updates on guidance documents issued from the Office of Cellular Tissue and Gene Therapies Center for Biologics Evaluation and Research (CBER) FDA. On October 23 from 12:30 p.m. to approximately 5 p.m. the Committee will discuss considerations for the design of early-phase clinical trials of cellular and gene therapy products. CBER published a draft guidance on this topic on July 2 2013 and it is located at the Cellular Tissue and Gene Therapies Guidances page.

GMO babies now being engineered in labs under guise of preventing incurable disease. Genetically modified mosquitoes may soon be released in Florida. Glow-in-the-dark Sheep: Genetically Modified At Uruguay Lab. New Study Proves Bt Toxins in GMOs Toxic to Mammalian Blood. Dr. EnviroPig. Leslie Hatfield: New Analysis of Wikileaks Shows State Department's Promotion of Monsanto's GMOs Abroad. Back in December 2010, Wikileaks released thousands of cables between the US State Department and over 100 embassies around the world, some of which (about ten percent) shed light on the U.S. government's promotion of agricultural biotechnology abroad. The subject matter -- for those with a lot of time on their hands and a deep interest in the federal government's treatment of agricultural biotechnology -- was fascinating. But the timing of the release -- just before the Christmas holiday -- could not have been worse, and the story mostly got buried.

Flash forward to May 2013. Our friends at Food & Water Watch have revived it with a new report, Biotech Ambassadors: How the U.S. Whose-side-ya-on. Facebook wages censorship war against moms of autistic children who protest GMOs: Exclusive interview with Andrea Lalama. (NaturalNews) When Facebook suspended the account of a mom of two autistic children who held anti-GMO signs at the recent rally, it became national news. Drudge Report linked to our Natural News story which documented Facebook censoring multiple accounts for sharing a photo Facebook absurdly called "abusive. " That photo, it turns out, was nothing more than a picture of two children holding up hand-made signs at the March Against Monsanto. One of the signs read, "Biopesticides = Autism, Say No to GMO" and the other sign read, "Organic Food It's My Medicine, Label GMOs" (see videos, below).

This defiance against GMOs was apparently too much for Facebook to tolerate, so it took immediate action to censor the account of the mom, Andrea Lalama. Proposition 37 / Californie. Why would a company with an organic food brand oppose Proposition 37? Yes on Prop 37. (25) Timeline Photos. If you're so proud of them, why not label them? Roderick Caparoso. Seralini-sept-2012-monsanto-comments. The Growing Global Challenge to Monsanto's Monopolistic Greed. Farmers sue Monsanto over GMO wheat strain found in crops. Monsanto Cafeteria.