Visual Thinking. The Meme Hustler. Tim O’Reilly’s crazy talk Evgeny Morozov [from The Baffler No. 22, 2013] While the brightest minds of Silicon Valley are “disrupting” whatever industry is too crippled to fend off their advances, something odd is happening to our language. 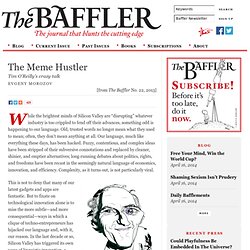 Old, trusted words no longer mean what they used to mean; often, they don’t mean anything at all. Our language, much like everything these days, has been hacked. This is not to deny that many of our latest gadgets and apps are fantastic. Fortunately, Silicon Valley, that never-drying well of shoddy concepts and dubious paradigms—from wiki-everything to i-something, from e-nothing to open-anything—is ready to help.

Silicon Valley has always had a thing for priests; Steve Jobs was the cranky pope it deserved. The enduring emptiness of our technology debates has one main cause, and his name is Tim O’Reilly. Alas, O’Reilly and the dead Germans parted ways long ago. None of this is necessarily bad. Silva Rhetoricae: The Forest of Rhetoric.

Freelance Translator Info - a web site to provide useful information to translators. Sekou Sundiata on music, poetry, East Harlem and activism. Linguistic support for revising and editing - Zurich Open Repository and Archive. [Crowd Leader: Ville Miettinen] How Language Learners are Translating the Web. Urban Dictionary, February 29: leap of faith. Synonym Finder » Find synonyms, antonyms & definition for (almost) any word. The free dictionary. Morpheme(s) of the Year. « previous post | next post » In the tumultuous run-up to the momentous announcement of the American Dialect Society's Word of the Year (to be proclaimed on January 6, 2012), Language Log's own Ben Zimmer is the main point-man with the media. 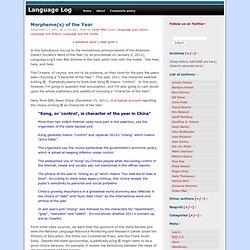 See here, here, and here. The Chinese, of course, are not to be outdone, so they have for the past few years been choosing a "Character of the Year. " This year, 2011, the character selected is kòng 控. Everybody seems to think that kòng 控 means "control". "Kong, or 'control', is character of the year in China" More than two million internet users took part in the selection, say the organisers of the state-backed poll. Kong generally means "control" and replaces 2010's "zhang" which means "price hikes". The organisers say the choice symbolises the government's economic policy, which is aimed at keeping inflation under control.

The phrase of the year is "shang bu qi" which means "too delicate to bear a blow". Kòngzhì 控制 ("control; dominate") Permalink. Www.crayne.com/articles/The-Use-of-Dashes.pdf. [bnc] British National Corpus. "take a decision" vs. "make a decision" “Healthcare” vs. “Health Care”: The Definitive Word(s) By Michael Millenson This post was originally published on The Health Care Blog A recent contributor to The Health Care Blog wondered about the correctness of “health care” versus “healthcare.” 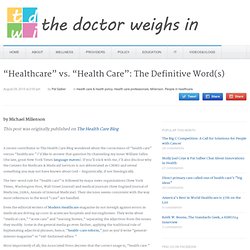 I’d like to answer that question by channeling my inner William Safire (the late, great New York Times language maven). If you’ll stick with me, I’ll also disclose why the Centers for Medicare & Medicaid Services is not abbreviated as CMMS and reveal something you may not have known about God – linguistically, if not theologically. The two-word rule for “health care” is followed by major news organizations (New York Times, Washington Post, Wall Street Journal) and medical journals (New England Journal of Medicine, JAMA, Annals of Internal Medicine).

Even the editorial writers of Modern Healthcare magazine do not inveigh against errors in medicalcare driving up costs in acutecare hospitals and nursinghomes. A stylebook? Stylebooks differ. Payer vs Payor. Lang-8 - Multi-lingual language learning and language exchange. Find Synonyms and Antonyms of Words at Thesaurus.com. American and British English spelling differences. Modelling or modeling? Traveling or travelling? Doubling a final consonant when adding a suffix. Manual of Style/Spelling. This is the Manual of Style (spelling) guideline page, a handy reference for editors. 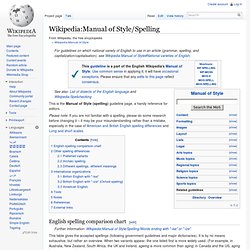 Please note: If you are not familiar with a spelling, please do some research before changing it – it may be your misunderstanding rather than a mistake, especially in the case of American and British English spelling differences and Long and short scales. English spelling comparison chart[edit] This table gives the accepted spellings (following government guidelines and major dictionaries).

It is by no means exhaustive, but rather an overview. When two variants appear, the one listed first is more widely used. The spelling systems of unlisted Commonwealth countries, such as India, Pakistan and Singapore, are generally close to the British spelling system, with possibly a few local differences. See Notes for explanations of the references above. Other spelling differences[edit] Preferred variants[edit]