Three incredible paragraphs. Watching US TV today reminded me of my remark on Conan O'Brien. It looks as though Trump is assembling the crew for a pirate ship. Kushner was systematically dismissing people who had ties with Christie who , as federal prosecutor, had sent Kushner’s father to jail. President Abdel Fattah el-Sisi of Egypt was the first to reach Mr. 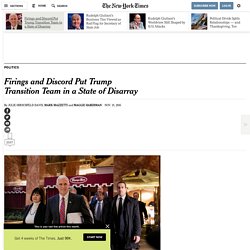 Trump for such a call last Wednesday, followed by Prime Minister Benjamin Netanyahu of Israel not long afterward. But that was about 24 hours before Prime Minister Theresa May of Britain got through — a striking break from diplomatic practice given the close alliance between the United States and Britain. Despite the haphazard nature of Mr.

It's Time to Pay More Attention to Jared Kushner. Chris Christie was fired as the head of Donald Trump's transition team last week. 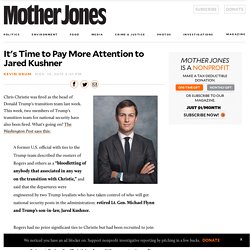 This week, two members of Trump's transition team for national security have also been fired. What's going on? The Washington Post says this: A former U.S. official with ties to the Trump team described the ousters of Rogers and others as a “bloodletting of anybody that associated in any way on the transition with Christie,” and said that the departures were engineered by two Trump loyalists who have taken control of who will get national security posts in the administration: retired Lt. Gen. @nycjim Already abusing power of office to seek revenge for is son- in-law. How did ‘less than stellar’ high school student Jared Kushner get into Harvard?

I would like to express my gratitude to Jared Kushner for reviving interest in my 2006 book, The Price of Admission. 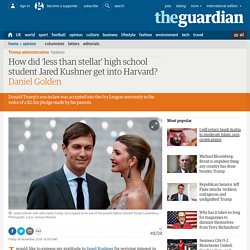 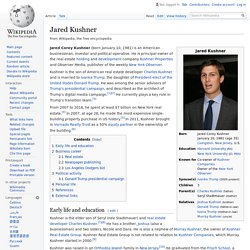 He is principal owner of the real estate holding and development company Kushner Properties and Observer Media, publisher of the weekly New York Observer. Kushner is the son of American real estate developer Charles Kushner and is married to Ivanka Trump, the daughter of President-elect of the United States Donald Trump. 1. In Indiana, Mitch Daniels (Pence's predecessor) was into infrastructure privatization. We all know Trump is a horrific figure to hold power over the US. But Mike Pence may be even more terrifying... Mike Pence Will Be the Most Powerful Christian Supremacist in U.S. History. The election of Donald Trump has sent shockwaves through the souls of compassionate, humane people across the country and the world. 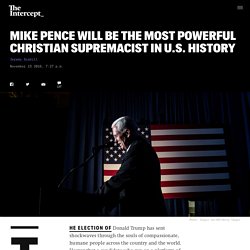 Horror that a candidate who ran on a platform of open bigotry, threats against immigrants and Muslims, and blatant misogyny will soon be president is now sinking in. Trump appointed a white nationalist, Steve Bannon, as chief White House strategist — which was promptly celebrated by the American Nazi Party and the Ku Klux Klan. Bannon and other possible extremist Trump appointees, such as John Bolton, a neocon who believes the U.S. should “bomb Iran,” and the authoritarian Rudy Giuliani, are now receiving much deserved public scrutiny. The incoming vice president, Mike Pence, has not elicited the same reaction, instead often painted as the reasonable adult on the ticket, a “counterbalance” to Trump and a “bridge to the establishment.” However, there is every reason to regard him as, if anything, even more terrifying than the president-elect.

Trump transition team announces five-year lobbying ban for appointees. Appointees to President-elect Donald Trump's administration will be asked to sign a form barring them from being a registered lobbyist for five years after they leave government service, officials announced Wednesday -- following up on the D.C. outsider's pledge to "drain the swamp. 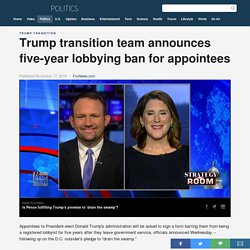 " Republican National Committee chief strategist Sean Spicer said on a conference call with reporters that the prohibition would help to ensure people won't be able to use government service "to enrich themselves. " In addition, Spicer announced that Trump transition team members would be barred from lobbying about the issues they had worked on for six months after their departure. He did not immediately explain how either ban would be enforced. The new Trump transition policy is one of several aimed at curbing the influence of lobbyists. His original transition team, assembled under New Jersey Gov. Trump eist van zijn aankomende ministers dat ze nadat ze gediend hebben 5 jaar lang geen lobbyistenwerk verrichten. Protesters just stormed Trump’s team meeting, demand firing of Bannon #FIREBANNON #JewishResistance.

Trump’s Empire: A Maze of Debts and Opaque Ties. As president, Mr. 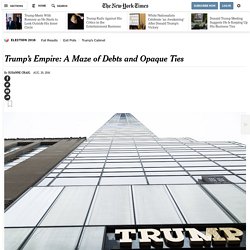 How Trump Is Good for China. Photo SHANGHAI — Perhaps no country has taken more hits from than . 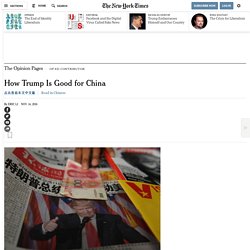 During the presidential campaign, Mr. Trump made it sound as if making America “great again” meant defeating China. But much of the Chinese public supported him. And President was among the first world leaders to congratulate him. The rise of GOP mega-donor Rebekah Mercer. Mitt Romney had just lost the 2012 presidential election, and a group of wealthy donors assembled in New York’s University Club was trying to figure out what had gone wrong. 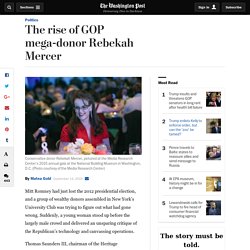 Suddenly, a young woman stood up before the largely male crowd and delivered an unsparing critique of the Republican’s technology and canvassing operations. Thomas Saunders III, chairman of the Heritage Foundation’s Board of Trustees, was impressed. “Who is that?” He asked the man next him. Soon, there would be few in conservative policy and political circles who did not know the name Rebekah Mercer. Galvanized in part by the Republicans’ 2012 White House loss, the middle daughter of billionaire hedge fund magnate Robert Mercer has rattled the status quo by directing her family’s resources into an array of investments on the right. The heiress quietly shaping Trump’s operation.

Some of the biggest names on the right are jockeying for power in President-elect Donald Trump’s nascent operation, but one of the lowest-profile figures is arguably among those wielding the most clout — a press-shy hedge fund heiress who co-owns a boutique cookie bakery. 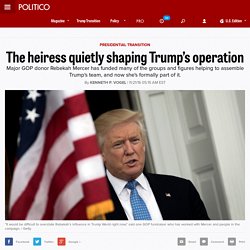 Rebekah Mercer, a 42-year-old who homeschools her young children, rarely visits Trump Tower and has a relatively narrow official portfolio in Trump’s transition effort. Her influence comes instead from her close relationships with the people and groups carrying out the day-to-day work of building Trump’s administration and political apparatus, some of whom have been the beneficiaries of millions of dollars of funding from her family. Story Continued Below. Professor who called Trump election now predicts impeachment. Allan Lichtman (@AllanLichtman) General Flynn (@GenFlynn) Michael Flynn, Trump's NSA pick, is a cybersecurity hawk. Michael Flynn, the man President-elect Donald Trump plans to name as U.S. national security advisor, believes the government is falling behind on cybersecurity.

Trump named Flynn to his cabinet on Friday after the former military intelligence leader acted as the top military advisor to Trump's presidential campaign. Flynn previously was director of the Defense Intelligence Agency and has served in U.S. intelligence operations in Afghanistan and Iraq. Former NSA Director Doesn't Think Michael Flynn Is Up To The Job. Steve Bannon fires back at the media. Steve Bannon, set to be a top strategic adviser in President-elect Donald Trump’s White House, lashed out at the media in an interview published Friday evening by The Wall Street Journal. Democrats and the media, he told opinion columnist Kimberly Strassel, are casting him as a “cloven-hoofed devil” by associating him with the views promoted on the website he headed, Breitbart News, which has served as a platform for the so-called alt-right movement.

Trae Stephens, a principal at billionaire Peter Thiel’s venture capital firm Founders Fund, was appointed last week by Donald Trump to help lead the transition effort at the Defense Department. Thiel, who made a $1,000,000 donation to a pro-Trump Super PAC, is Trump’s highest-profile supporter in Silicon Valley. At Thiel’s Founder Fund, Stephens “focuses on startups operating in the government space,” according to his official biography. Before that, he worked at another Thiel-backed firm: Palantir, a highly controversial data analysis firm that is currently competing for Defense Department contracts.

“Trae was an early employee at Palantir Technologies, where he led teams focused on growth in intelligence and defense as well as international expansion,” says the biography. A Peter Thiel ally will steer Trump’s Pentagon policy - The Verge. RT CNNPolitics "Steven Mnuchin, Donald Trump's pick for treasury secretary: "Our first priority is going to be the… Steven Mnuchin - Wikipedia. Steven Terner Mnuchin (born December 21, 1962) is an American banker, film producer, and political fundraiser. He is a former partner for Goldman Sachs for 17 years where he accrued a net worth estimated at about $40 million.

He then founded the motion picture firm, RatPac-Dune Entertainment. In 2016, after serving as finance chair in the successful Donald J. Trump presidential campaign, it is reported that Mnuchin may be named the choice for U.S. Treasury Secretary by the President-elect. Early life Steven Mnuchin was born to a Jewish family on December 21, 1962.[1][2][3] He is the son of Elaine Terner Cooper, of New York, and Robert E. Career Mnuchin accrued a net worth estimated at about $40 million. while working for Goldman Sachs for 17 years, where his father had worked for three decades and had also made a fortune.[5][6] In 2002, Mnuchin left Goldman and worked briefly for his Yale roommate Edward Lampert, chief executive of Sears. Personal life. EXCLUSIVE: Steve Mnuchin: 'No absolute tax cut for the upper class' Donald Trump's Treasury Secretary Pick Is A Hedge Funder And 2nd-Generation Goldman Sachs Partner.

Priebus confirms that climate denial will be the official policy of Trump’s administration. And you still thought Drumpf would have a change of heart with climate change? Think again.. Arrest. Kushner. Immediately.