How the So-Called Alt-Right Went From the Fringe to the White House. Stephen Bannon. 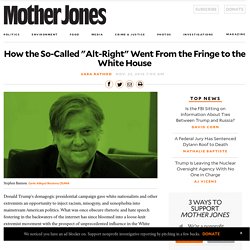 Carlo Allegri/Reuters/ZUMA Donald Trump's demagogic presidential campaign gave white nationalists and other extremists an opportunity to inject racism, misogyny, and xenophobia into mainstream American politics. What was once obscure rhetoric and hate speech festering in the backwaters of the internet has since bloomed into a loose-knit extremist movement with the prospect of unprecedented influence in the White House. Profile of Late Conservative Commentator Andrew Breitbart. Andrew Breitbart, conservative commentator and founder of the websites Big Government, Big Media, and Big Journalism, died unexpectedly early Thursday morning at the age of 43. 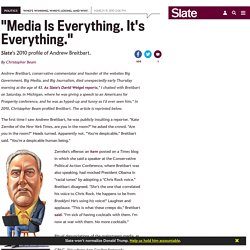 As Slate's David Weigel reports," I chatted with Breitbart on Saturday, in Michigan, where he was giving a speech to an Americans for Prosperity conference, and he was as hyped-up and funny as I'd ever seen him. " In 2010, Christopher Beam profiled Breitbart. The article is reprinted below. The first time I saw Andrew Breitbart, he was publicly insulting a reporter.

"Kate Zernike of the New York Times, are you in the room? " Meet the Dapper White Nationalist Who Wins Even if Trump Loses. UPDATE: Several weeks after this story published in October, Spencer gave a triumphant speech at a conference in Washington describing America as a "white country" and proclaiming, "Hail Trump, hail our people, hail victory! 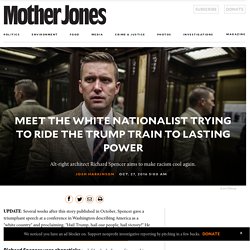 " He was met with cheers and Nazi salutes. Read more in our investigation of how the white nationalist movement capitalized on the Trump campaign. Richard Spencer uses chopsticks to deftly pluck slivers of togarashi-crusted ahi from a rectangular plate. He is sitting in the Continental-style lounge of the Firebrand Hotel, near his home in the upscale resort town of Whitefish, Montana, discussing a subject not typically broached in polite company. "Race is something between a breed and an actual species," he says, likening the differences between whites and people of color to those between golden retrievers and basset hounds.

Alternativeright.com. 4Tran /pol/Happy Merchant. Editor’s Note: This entry may be offensive to some users. 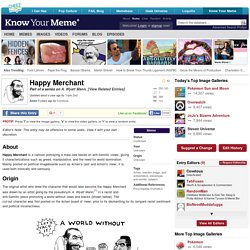 View it with your own discretion. About Happy Merchant is a cartoon portraying a male Jew based on anti-Semitic views, giving it characterizations such as greed, manipulative, and the need for world domination. Mainly posted on political imageboards such as 4chan’s /pol/ and 4chon’s /new/, it is used both ironically and seriously. Origin The original artist who drew the character that would later become the Happy Merchant was drawn by an artist going by the pseudonym A. 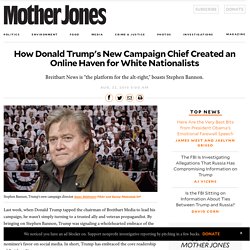 By bringing on Stephen Bannon, Trump was signaling a wholehearted embrace of the "alt-right," a once-motley assemblage of anti-immigrant, anti-Muslim, ethno-nationalistic provocateurs who have coalesced behind Trump and curried the GOP nominee's favor on social media. In short, Trump has embraced the core readership of Breitbart News. "We're the platform for the alt-right," Bannon told me proudly when I interviewed him at the Republican National Convention (RNC) in July. What Is Gamergate, and Why? An Explainer for Non-Geeks.

Until recently, you might have lived a life blissfully unaware of the online #Gamergate movement. 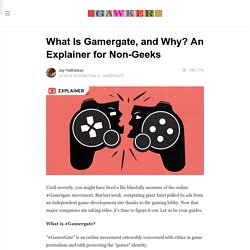 But last week, computing giant Intel pulled its ads from an independent game-development site thanks to the gaming lobby. Now that major companies are taking sides, it's time to figure it out. Let us be your guides. !Twenty-Plus Errors, Fabrications, And Distortions In Peter Schweizer's Clinton Cash. Free Global Broadcast of ‘Clinton Cash’ Documentary Online at Breitbart.com. ***Due to the overwhelming demand to view this film, we’ve decided to broadcast it online for free with no password required.*** The next global broadcast of “Clinton Cash” will be SUNDAY, JULY 24 at 2:00PM ET and 8:00pm ET at this link. 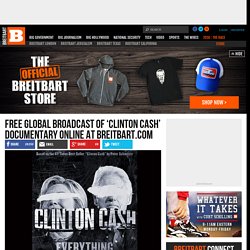 A rally in Stone Mountain, Georgia, in April 2016 John Bazemore/AP With his many appeals to nativism, bigotry, and bitter discontent, Donald Trump has enthralled far-right extremists with his campaign for president. 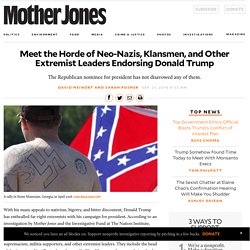 According to an investigation by Mother Jones and the Investigative Fund at The Nation Institute, since Trump officially announced his bid in June 2015 he has drawn effusive praise and formal backing from some of the country's most virulent neo-Nazis, white supremacists, militia supporters, and other extremist leaders. They include the head of the American Nazi Party, three former Ku Klux Klansmen, four people involved in a recent armed standoff against federal authorities at an Oregon wildlife refuge, and at least 15 individuals affiliated with organizations described by the Southern Poverty Law Center as hate groups.

Trump has disavowed none of them. "We have a wonderful OPPORTUNITY here folks, that may never come again," wrote Rocky J. Neo-Nazis Rocky J. Andrew Anglin. Behind The Racist Hashtag That Is Blowing Up Twitter - BuzzFeed News. &quot;@codyave: @drudgereport @BreitbartNews @Writeintrump &quot;You Can't Stump the Trump&quot; Trump's Pants on Fire tweet that blacks killed 81% of white homicide victims. A day after a black activist was kicked and punched by voters at a Donald Trump rally in Alabama, Trump tweeted an image packed with racially loaded and incorrect murder statistics. 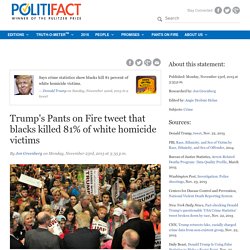 Killings by police We also looked at what percentage of each race the police have killed. We Found Where Donald Trump's &quot;Black Crimes&quot; Graphic Came From. So today, this happened. 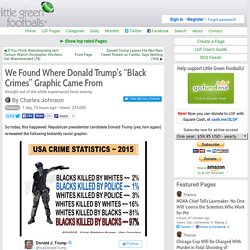 Republican presidential candidate Donald Trump (yes, him again) re-tweeted the following blatantly racist graphic: Not only is this racist, it’s completely false. These statistics are made up out of thin air, and the source — the “Crime Statistics Bureau” in San Francisco — simply does not exist. Donald Trump calls for complete ban on Muslims entering the US – video. Donald Trump retweets 'White Genocide' Twitter user. The profile -- with about 2,300 followers -- used the name "Donald Trumpovitz," linked to a website containing a pro-Adolf Hitler documentary, featured a background photo with red lettering saying "Get the F--- Out of My Country" and had a location of "Jewmerica.

" The account also includes a photo of George Lincoln Rockwell, founder of the American Nazi Party. The account's Twitter feed was largely a collection of retweets about violence allegedly committed by African-American suspects and anti-Arab posts. The tweet Trump actually reposted from the user, however, was a photoshopped image of the GOP front-runner's opponent Jeb Bush, depicting him as a disheveled beggar outside Trump Tower. As he always does, Trump manually retweeted the user, meaning he copied and pasted the full tweet into his post rather than clicking a button to send the tweet to his followers. "@WhiteGenocideTM: @realDonaldTrump Poor Jeb. David Duke Urges His Supporters To Volunteer And Vote For Trump - BuzzFeed News. Donald Trump stumbles on David Duke, KKK. When asked about his comments on CNN's "State of the Union," Trump blamed a "bad earpiece.

" "I was sitting in a house in Florida, with a bad earpiece," the brash billionaire told NBC's "Today" show. "I could hardly hear what he's saying. I hear various groups. I don't mind disavowing anyone. I disavowed Duke the day before at a major conference. " In the hours that followed Trump's original comments, the real estate mogul used Twitter to explain his remarks amid an outpouring of criticism from his Republican presidential rivals.

The Sunday uproar started when Trump was asked by Tapper whether he would disavow Duke and other white supremacist groups that are supporting his campaign. Donald Trump's absurd claim that he knows nothing about former KKK leader David Duke. A few days before Donald Trump dominated Super Tuesday, the Republican frontrunner was being rebuked left and right for declining to denounce former Ku Klux Klan leader David Duke.

The controversy began Feb. 24, when Duke said that he supports Trump’s candidacy and told listeners of his radio program to "get active" for Trump. Two days later, Trump disavowed Duke in a news conference. But Trump, who claims to have the "world’s greatest memory," seemed to have forgotten this by Feb. 28. Trump: David Duke is a Bad Guy Interview. An Establishment Conservative's Guide To The Alt-Right. A specter is haunting the dinner parties, fundraisers and think-tanks of the Establishment: the specter of the “alternative right.” Young, creative and eager to commit secular heresies, they have become public enemy number one to beltway conservatives — more hated, even, than Democrats or loopy progressives.

" (Victoria Walker/The Washington Post) Democrat Hillary Clinton accused Donald Trump of embracing a brand of U.S. political conservatism associated with white nationalism and nativism during a Nevada campaign stop on Aug. 25. Hillary Clinton Calls Many Trump Backers ‘Deplorables,’ and G.O.P. Pounces. “Wow, Hillary Clinton was SO INSULTING to my supporters, millions of amazing, hard working people. I think it will cost her at the polls!” Mr. Alt-Right Movement Presents Its Vision for an All-White Society With Trump Paving the Way. Evan Vucci/AP The alt-right movement, reveling in the spotlight cast upon it by the Donald Trump campaign, made its debut to the mainstream media on Friday with a press conference to lay out its goal of an all-white society and its love for Trump.

The once-fringe movement has suddenly found a prominent place in the Trump campaign and among its most loyal backers. ADL Adds “Pepe the Frog” Meme, Used by Anti-Semites and Racists, to Online Hate Symbols Database. Joins Echo, Swastika, and Blood Drop Cross. White Nationalists See Trump as Their Troll in Chief. Is He With Them? Jeff Blehar had no idea he was about to become a conduit for a virulent political awakening. Trump picks Priebus as White House chief of staff, Bannon as top adviser. White Supremacy In The White House - Walter Rhett.