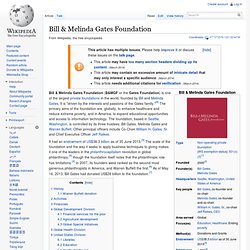 It is "driven by the interests and passions of the Gates family. "[4] The primary aims of the foundation are, globally, to enhance healthcare and reduce extreme poverty, and in America, to expand educational opportunities and access to information technology. The foundation, based in Seattle, Washington, is controlled by its three trustees: Bill Gates, Melinda Gates and Warren Buffett. Other principal officers include Co-Chair William H. History[edit] Front building In 1997, the foundation was formed as the William H. Rear building Detail of the facade of the visitor center In April 2010, Gates was invited to visit and speak at the Massachusetts Institute of Technology where he asked the students to take on the hard problems of the world in their futures. Google $10 million for Project 10^100 winners. Two years ago today, we began Project 10^100 by asking you to share your ideas for changing the world by helping as many people as possible. 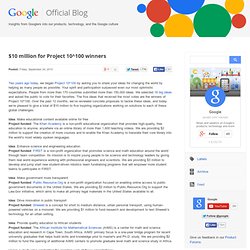 Your spirit and participation surpassed even our most optimistic expectations. People from more than 170 countries submitted more than 150,000 ideas. We selected 16 big ideas and asked the public to vote for their favorites. The five ideas that received the most votes are the winners of Project 10^100. Over the past 12 months, we’ve reviewed concrete proposals to tackle these ideas, and today we’re pleased to give a total of $10 million to five inspiring organizations working on solutions to each of these global challenges:

's Doodle notepad. Khan Academy has eclipsed MIT's OpenCourseWare (OCW) in terms of videos viewed. Khan Academy also has thousands of resources translated into other languages. Khan Academy also launched a computer science module in September 2012.[21][22] Harvard University. Harvard University. Harvard University is a private Ivy League research university in Cambridge, Massachusetts, whose history, influence and wealth have made it one of the most prestigious universities in the world.[6][7][8][9][10] The University is organized into eleven separate academic units—ten faculties and the Radcliffe Institute for Advanced Study—with campuses throughout the Boston metropolitan area:[15] its 209-acre (85 ha) main campus is centered on Harvard Yard in Cambridge, approximately 3 miles (5 km) northwest of Boston; the business school and athletics facilities, including Harvard Stadium, are located across the Charles River in the Allston neighborhood of Boston and the medical, dental, and public health schools are in the Longwood Medical Area.[5] Eight U.S. presidents have been graduates, and some 150 Nobel Laureates have been affiliated as students, faculty, or staff.

History Colonial The leading Boston divine Increase Mather served as president from 1685 to 1701. 19th century. MIT - Massachusetts Institute of Technology. Massachusetts Institute of Technology. MIT is often cited as among the world's top universities.[10][11][12][13] As of 2014[update], 81 Nobel laureates, 52 National Medal of Science recipients, 45 Rhodes Scholars, 38 MacArthur Fellows, and 2 Fields Medalists have been affiliated with MIT. 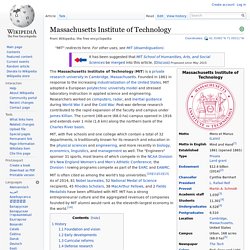 MIT has a strong entrepreneurial culture and the aggregated revenues of companies founded by MIT alumni would rank as the eleventh-largest economy in the world.[14] History[edit] Foundation and vision[edit] Rogers, a professor from the University of Virginia, wanted to establish an institution to address rapid scientific and technological advances.[19][20] He did not wish to found a professional school, but a combination with elements of both professional and liberal education,[21] proposing that: The Rogers Plan reflected the German research university model, emphasizing an independent faculty engaged in research, as well as instruction oriented around seminars and laboratories.[23][24] Early developments[edit] Harvard and MIT Put $60-Million Into New Platform for Free Online Courses - Wired Campus. The group of elite universities offering free online courses just got bigger. 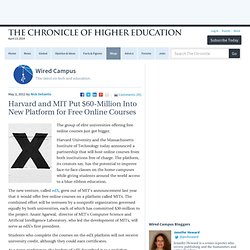 Harvard University and the Massachusetts Institute of Technology today announced a partnership that will host online courses from both institutions free of charge. The platform, its creators say, has the potential to improve face-to-face classes on the home campuses while giving students around the world access to a blue-ribbon education. The new venture, called edX, grew out of MIT’s announcement last year that it would offer free online courses on a platform called MITx. The combined effort will be overseen by a nonprofit organization governed equally by both universities, each of which has committed $30-million to the project. EdX wikipedia. EdX is a massive open online course (MOOC) platform founded by the Massachusetts Institute of Technology and Harvard University in May 2012 to host online university-level courses in a wide range of disciplines to a worldwide audience at no charge and to conduct research into learning. 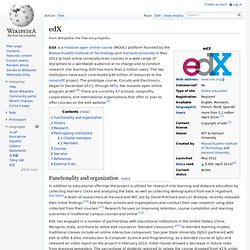 EdX has more than 2 million users. The two institutions have each contributed $30 million of resources to the nonprofit project. The prototype course, Circuits and Electronics, began in December 2011, through MITx, the massive open online program at MIT.[4] There are currently 47 schools, nonprofits, corporations, and international organizations that offer or plan to offer courses on the edX website.[5] Functionality and organization[edit] Faust: The future of online learning and residential education - Opinion.

Online Learning Platform, edX, Goes International With The Addition Of Six New Schools. When it comes to online education and massive open online courses (a.k.a. 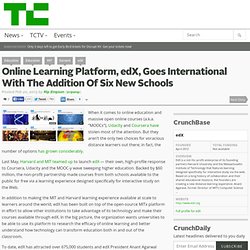 “MOOCs”), Udacity and Coursera have stolen most of the attention. But they aren’t the only two choices for voracious distance learners out there; in fact, the number of options has grown considerably. Last May, Harvard and MIT teamed up to launch edX — their own, high-profile response to Coursera, Udacity and the MOOC-y wave sweeping higher education. Backed by $60 million, the non-profit partnership made courses from both schools available to the public for free via a learning experience designed specifically for interactive study on the Web. In addition to making the MIT and Harvard learning experience available at scale to learners around the world, edX has been built on top of the open-source MITx platform in effort to allow other institutions to take advantage of its technology and make their courses available through edX. The new members will begin offering courses on edX beginning in the fall of 2013. Stanford joins edX platform development effort – code release date set.

TU Delft to offer online courses in consortium with MIT and Harvard. TU Delft is to offer courses as ‘Massive Open Online Courses’ (MOOCs) on edX. 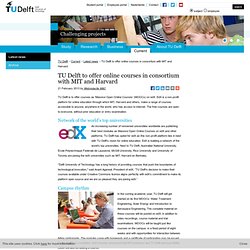 EdX is a non-profit platform for online education through which MIT, Harvard and others, make a range of courses accessible to anyone, anywhere in the world, who has access to internet. The free courses are open to everyone, without prior education or entry examination. Network of the world’s top universities. DelftX (DelftX) sur Twitter. TU Delft als eerste in zee met edX. 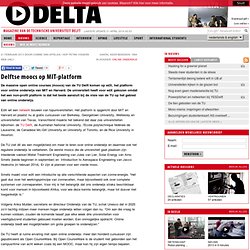 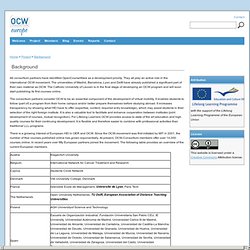 They all play an active role in the international OCW movement. The universities of Madrid, Barcelona, Lyon and Delft have already published a significant part of their own material as OCW. The Catholic University of Leuven is in the final stage of developing an OCW program and will soon start publishing its first courses online.

The consortium partners consider OCW to be an essential component of the development of virtual mobility. It enables students to follow (part of) a program from their home campus and/or better prepare themselves before studying abroad. There is a growing interest of European HEI in OER and OCW. However, the consortium partners are convinced that OCW’s potential is still underutilized. A very recent study by the ‘Open Educational Quality Initiative’ confirms this observation. It is important to emphasize that this project will focus on OCW. MIT OpenCourseWare. 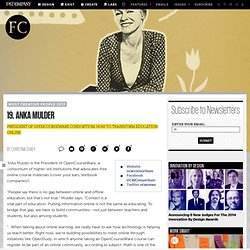 "People say there is no gap between online and offline education, but that's not true," Mulder says. "Contact is a vital part of education. Putting information online is not the same as educating. The Ultimate Democratizer. 21 februari 2013 - The edX family has a Dutch member: Delft University of Technology will join the major MOOC-platform founded by MIT and Harvard. ScienceGuide spoke with a delighted edX president Anant Agarwal: “The introduction of MOOCs is like the rising of the tide, it will lift all boats”. EdX is a non-profit enterprise that features learning designed specifically for interactive study via the web.

Teaching no longer takes place ’just’ or ‘only’ in classrooms, learning sequences are offered in so-called Massive Open Online Courses (MOOCs). Blackboards have been replaced by videos and laboratories have become virtual. Equal access to world-class education Anant Agarwal is “very delighted” that TU Delft will offer its courses on edX.

Stanford was opened on October 1, 1891[2][3] as a coeducational and non-denominational institution. Stanford is located in northern Silicon Valley near Palo Alto, California. Students compete in 36 varsity sports, and the University is one of two private institutions in the Division I FBS Pacific-12 Conference. History[edit] Origins and early years (1885–1906)[edit] Stanford University. Udacity. Sebastian Thrun World Economic Forum 2013 Udacity is a for-profit educational organization founded by Sebastian Thrun, David Stavens, and Mike Sokolsky offering massive open online courses (MOOCs).[3] According to Thrun, the origin of the name Udacity comes from the company's desire to be "audacious for you, the student".[4][5] While it originally focused on offering university-style courses, it now focuses more on vocational courses for professionals. History[edit] In 2014, the Georgia Institute of Technology launched the first "massive online open degree" in computer science by partnering with Udacity and AT&T; a complete master's degree through that program costs students $7,000.[15][16][17][18]