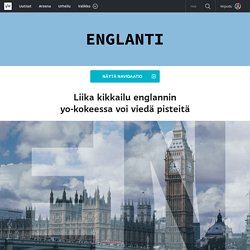 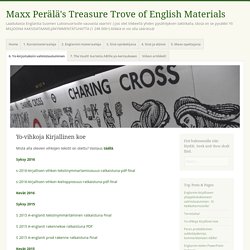 Vastaus täällä. Syksy 2016 s-2016-kirjallisen-vihkon-tekstinymmartamisosuus-ratkaistuna-pdf-final s-2016-kirjallisen-vihkon-kielioppiosuus-ratkaistuna-pdf-final Kevät 2016 Syksy 2015 S 2015 A-englanti tekstinymmärtäminen ratkaistuna Final. Learn With News – Learn English With News. Can You Get A Perfect Score On This Grammar Quiz? I am a migrant. This is the most dangerous time for our planet. As a theoretical physicist based in Cambridge, I have lived my life in an extraordinarily privileged bubble. 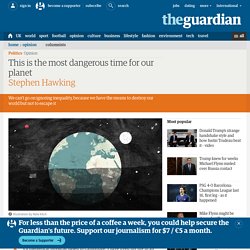 Cambridge is an unusual town, centred around one of the world’s great universities. Within that town, the scientific community that I became part of in my 20s is even more rarefied. And within that scientific community, the small group of international theoretical physicists with whom I have spent my working life might sometimes be tempted to regard themselves as the pinnacle. In addition to this, with the celebrity that has come with my books, and the isolation imposed by my illness, I feel as though my ivory tower is getting taller.

So the recent apparent rejection of the elites in both America and Britain is surely aimed at me, as much as anyone. It was, everyone seems to agree, the moment when the forgotten spoke, finding their voices to reject the advice and guidance of experts and the elite everywhere. I am no exception to this rule. Trump’s lies have a purpose. They are an assault on democracy. All politicians lie. 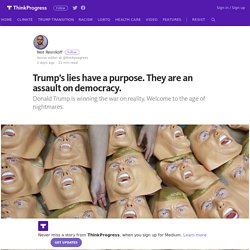 In a democracy, they usually tell lies to achieve a particular result: Maybe they want to conceal information that would damage their reputations, or take credit for something they had nothing to do with. Sometimes a falsehood can obstruct a piece of undesirable legislation, or facilitate the passage of a desirable one. But in each of these cases, a lie tends to be little more than a momentary deviation from the truth. It’s a brief sojourn outside the borders of our stable, shared reality. Some political lies are more ambitious than that. That’s what the second Bush administration tried to do.

Creating an alternate political universe requires discipline. If Bush and Rove constructed a fantasy world with a clear internal logic, Trump has built something more like an endless bad dream. For members of the Bush administration, even their power to mold reality had a place in the universe they created. The History of the English Language, Animated. By Maria Popova The history of language, that peculiar human faculty that Darwin believed was half art and half instinct, is intricately intertwined with the evolution of our species, our capacity for invention, our understanding of human biology, and even the progress of our gender politics. 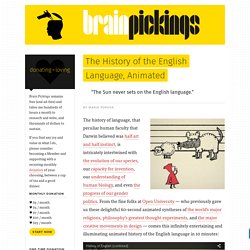 From the fine folks at Open University — who previously gave us these delightful 60-second animated syntheses of the world’s major religions, philosophy’s greatest thought experiments, and the major creative movements in design — comes this infinitely entertaining and illuminating animated history of the English language in 10 minutes: Complement with these 5 essential reads on language and the only surviving recording of Virginia Woolf’s voice, in which she explores the beauty of the English language. A Quiz: 25 Common Idioms that you Really Need to Know.

I know the feeling. 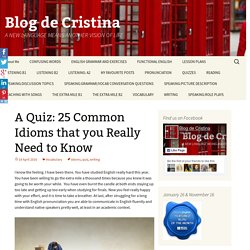 I have been there. You have studied English really hard this year. You have been willing to go the extra mile a thousand times because you knew it was going to be worth your while. You have even burnt the candle at both ends staying up too late and getting up too early when studying for finals. Now you feel really happy with your effort, and it is time to take a breather. Just by sheer luck, at a party, you are introduced to a British person and you feel it’s your opportunity to shine. “Did he just say something about the skin of my teeth?” Yes. In this quiz you’ll find some very common idioms used by native speakers.

Blog de Cristina is also on facebook. Tool used: Riddle Do you know what these idioms mean ? If something is on your bucket list You need to buy it quickly. Paris attacks: 'I will not give you the gift of hating you' Revising Simple Past,Used to and Would with some Engaging Activities. This lesson has been designed as a next-day revision activity for B2 (Intermediate +) students. 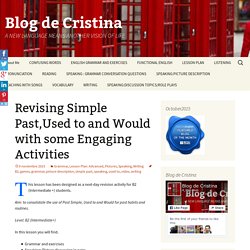 Aim: to consolidate the use of Past Simple, Used to and Would for past habits and routines. Level: B2 (Intermediate+) In this lesson you will find. Grammar and exercisesSpeaking: Picture discussion in pairsSpeaking: an advert from a popular drink comparing past and presentWriting: a fun writing gameSpeaking: bits of your childhood STEP 1. The use of these three verb forms to express past habits and routines can be a bit confusing for students, so in this class I am aiming at some revision to clarify concepts. Play online, learn online and feed the hungry.