India is no longer the world’s fastest-growing major economy. Was it ever? -power-investment-climate-change-asia-china-india-iea-report-a8914866. Since it powered us into the industrial revolution, coal-fired energy has become the single biggest driver of man-made climate change and its use across the world is still increasing. 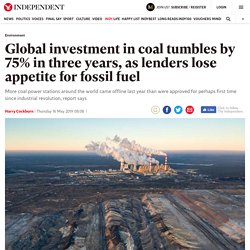 But while dependence on coal remains high, with coal-fired power plants currently fuelling around 38 per cent of global electricity, a new report indicates the demise of coal is already well underway. We’ll tell you what’s true. You can form your own view. From 15p €0.18 $0.18 USD 0.27 a day, more exclusives, analysis and extras. The International Energy Agency’s new world investment report released this week, reveals the companies funding coal-fired power stations appear to be making significant recalculations about the long-term viability of these plants.

This is shown by a collapse in Final Investment Decisions (FIDs) for coal plants, which have tumbled by 75 per cent in three years. The report says a total of 236 gigawatts of coal plants are under construction worldwide.

Economic and Political Weekly. Coming soon from Modi sarkar: RSS takeover of top research, cultural bodies. The new chairperson of the Indian Council of Historical Research, Yellapragada Sudershan Rao, has an interesting blog post from 2013, about 'Ayodhya and History'. 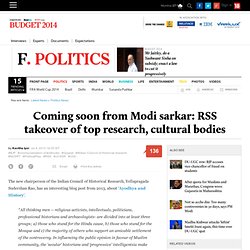 "All thinking men -- religious activists, intellectuals, politicians, professional historians and archaeologists- are divided into at least three groups; a) those who stand for the Hindu cause, b) those who stand for the Mosque and c) the majority of others who support an amicable settlement of the controversy. In influencing the public opinion in favour of Muslim community, the ‘secular’ historians and ‘progressive’ intelligentsia make concerted endeavor in support of the Muslim cause. They further condemn all those who sympathize the Hindu cause as Hindu fundamentalists and ‘saffron brigade’. " A retired history professor, Rao has penned several articles arguing that stories from the Ramayana and the Mahabharata are truthful accounts of history. If history is any indication, these words may soon prove to be ironic, indeed. The reverse brain drain: why NRIs are returning to India. I am a citizen of three countries, have lived in four countries and eight homes, and can speak four languages semi fluently. 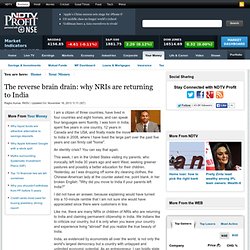 I was born in India, spent five years in one country, 12 years in Canada and the USA, and finally made the move to India in 2008, where I have lived the large part over the past five years and can firmly call "home". An identity crisis? You can say that again. The new face of India. In A Suitable Boy, Vikram Seth writes with affection of a placid India's first general election in 1951, and the egalitarian spirit it momentarily bestowed on an electorate deeply riven by class and caste: "the great washed and unwashed public, sceptical and gullible", but all "endowed with universal adult suffrage". 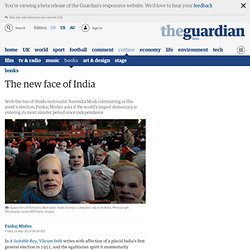 India's 16th general election this month, held against a background of economic jolts and titanic corruption scandals, and tainted by the nastiest campaign yet, announces a new turbulent phase for the country – arguably, the most sinister since its independence from British rule in 1947. Back then, it would have been inconceivable that a figure such as Narendra Modi, the Hindu nationalist chief minister of Gujarat accused, along with his closest aides, of complicity in crimes ranging from an anti-Muslim pogrom in his state in 2002 to extrajudicial killings, and barred from entering the US, may occupy India's highest political office.

Can the Tiger Ride the Elephant? (or, The Future of India under Modi) It can only be good for our country that there is someone with a clear mandate - rather than a hung Parliament, as was widely feared. 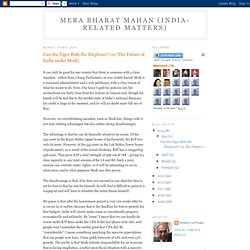 Modi is a seasoned administrator and a wily politician, with a clear vision of what he wants to do. Even if he hasn't spelt his policies out, his inclinations are fairly clear from his actions in Gujarat and, though his hands will be tied due to the terrible state of India's national finances, his credit is huge at the moment, and he will no doubt make full use of that. However, an overwhelming mandate, such as Modi has, brings with it not only striking advantages but also rather strong disadvantages. The advantage is that he can do basically whatever he wants. India’s Feudal Rapists. WHEN a distressed father is reporting his daughter’s disappearance to a policeman in India, there are some questions he doesn’t want to hear. 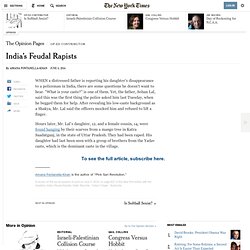 “What is your caste?” Is one of them. Yet, the father, Sohan Lal, said this was the first thing the police asked him last Tuesday, when he begged them for help. After revealing his low-caste background as a Shakya, Mr. Lal said the officers mocked him and refused to lift a finger. Hours later, Mr. Our understanding of their deaths will be incomplete until we recognize the role of the caste system in India’s rape crisis. For much of India’s history the lower castes, especially the Dalits (once known as untouchables), have been routinely raped by the landowning upper castes.