The Most Pressing Issues In Bioethics. The real future of healthcare is cultural change, not just AI and other technology. "It actually is quite easy to be a futurist with regards to where are we going with health," says Dr Ron Grenfell, director of health and biosecurity at CSIRO. 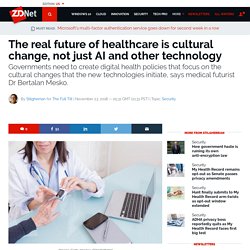 "It takes 15+ years to get evidence into practice," he told the Commonwealth Bank's Future of Health conference in Sydney last week. Nightmare Bacteria: What You Need to Know About Antibiotic-Resistant Germs. We May Have Found a Pathway That Controls Aging. Cracking Aging in Animals A team of researchers at Case Western Reserve University School of Medicine has identified a conserved molecular pathway that controls health and lifespan in nematode worms (Caenorhabditis elegans) — a frequently studied model organism in biological research. 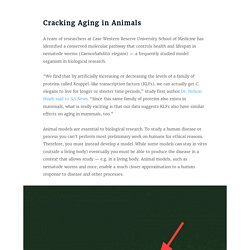 “We find that by artificially increasing or decreasing the levels of a family of proteins called Kruppel-like transcription factors (KLFs), we can actually get C. elegans to live for longer or shorter time periods,” study first author Dr. Nelson Hsieh said to Sci News. “Since this same family of proteins also exists in mammals, what is really exciting is that our data suggests KLFs also have similar effects on aging in mammals, too.” Animal models are essential to biological research. Mice share 99 percent of their DNA with humans, and have short lifespans compared to humans and other mammals. Lessons Applied to Humans Cells are less able to undertake these recycling functions as they age.

Why can’t we cure the common cold? The common cold has the twin distinction of being both the world’s most widespread infectious disease and one of the most elusive. 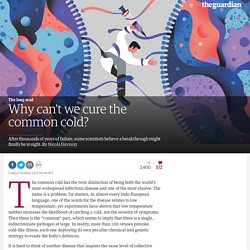 The name is a problem, for starters. Clearing the Body's Retired Cells Slows Aging and Extends Life - The Atlantic. I'm looking at a picture of two mice. 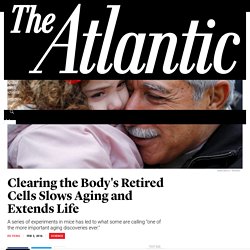 The one on the right looks healthy. These ER Docs Invented a Real Star Trek Tricorder. The original 1960s Star Trek series took place in a universe of the future with personal communicators, holograms, and the technology to send humans beyond our solar system. 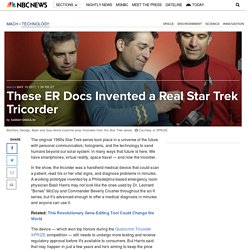 In many ways that future is here. We have smartphones, virtual reality, space travel — and now the tricorder. Scientists Built a Biological Computer Inside a Cell - Motherboard. MIT engineers have developed biological computational circuits capable of both remembering and responding to sequential input data. 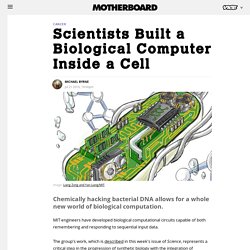 The group's work, which is described in this week's issue of Science, represents a critical step in the progression of synthetic biology with the integration of DNA-based memory, in particular, pointing the way toward building large computational systems from biological components—computing devices that are living cells—and, ultimately, programming complex biological functions. More specifically, Nathaniel Roquet and colleagues at MIT's Synthetic Biology Group were able to implement within a living cell what's known as a state machine: an abstract mathematical model describing computation as a list of of distinct internal states paired with an associated list of operations (or machine inputs) required to transition from state to state. 10 Ways Technology Is Changing Healthcare - The Medical Futurist. Are you afraid that robots will take over the jobs of nurses, doctors and other healthcare professionals? 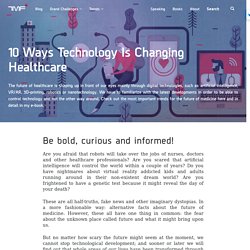 Are you scared that artificial intelligence will control the world within a couple of years? Do you have nightmares about virtual reality addicted kids and adults running around in their non-existent dream world? The First Medical Tricorder? The Big Viatom CheckMe Pro Review - The Medical Futurist. I believe you already know I’m a huge fan of science fiction. 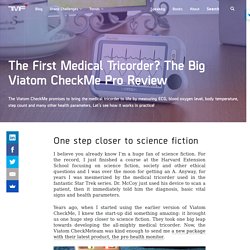 For the record, I just finished a course at the Harvard Extension School focusing on science fiction, society and other ethical questions and I was over the moon for getting an A. Anyway, for years I was mesmerized by the medical tricorder used in the fantastic Star Trek series. Dr. McCoy just used his device to scan a patient, then it immediately told him the diagnosis, basic vital signs and health parameters. Years ago, when I started using the earlier version of Viatom CheckMe, I knew the start-up did something amazing: it brought us one huge step closer to science fiction.

20 Medical Technology Advances: Medicine in the Future - Part II. - The Medical Futurist. As I mentioned in the first part of this series, the job of The Medical Futurist is to give a good summary of the ongoing projects and detect the ones with the biggest potential to be used in everyday medical practices and to determine the future of medicine. 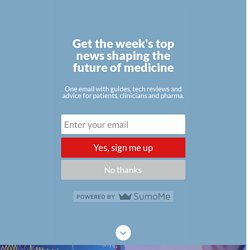 Here is the second part of the list of the 20 most futuristic medical technologies. Switching from long and extremely expensive clinical trials to tiny microchips which can be used as models of human cells, organs or whole physiological systems provides clear advantages. Drugs or components could be tested on these without limitations which would make clinical trials faster and even more accurate (in each case the conditions and circumstances would be the same). Internal 'clock' makes some people age faster and die younger – regardless of lifestyle. Scientists have found the most definitive evidence yet that some people are destined to age quicker and die younger than others - regardless of their lifestyle. 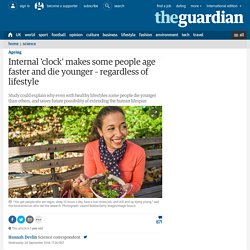 The findings could explain the seemingly random and unfair way that death is sometimes dealt out, and raise the intriguing future possibility of being able to extend the natural human lifespan. “You get people who are vegan, sleep 10 hours a day, have a low-stress job, and still end up dying young,” said Steve Horvath, a biostatistician who led the research at the University of California, Los Angeles. “We’ve shown some people have a faster innate ageing rate.” A higher biological age, regardless of actual age, was consistently linked to an earlier death, the study found. A Gorgeous—and Unsettling—Video of Evolution in Action. A Surprising Effect of Sugar on the Immune System. Do you feed a fever and starve a cold? Or is it the opposite? I can never remember. I never cared to. I thought it was just something people said when they didn’t know what else to say. DARPA $6.4M contract supports malaria research aimed at enhancing resilience.

Investigators believe learning why malaria causes acute, potentially lethal disease in some humans and animals, while others are much more resilient or tolerant, could lead them to better intervention strategies for malaria and other diseases, including new and better drugs. The Defense Advanced Research Projects Agency (DARPA) and the Army Research Laboratory (ARL) are supporting the research through a $6.4 million contract. The research partnership is part of DARPA’s THoR (Technologies for Host Resilience) program and is termed the HAMMER (Host Acute Models of Malaria to study Experimental Resilience) project.

HAMMER is one of a few projects in the THoR program, established for a three-year period, covering a variety of diverse host-pathogen model systems. The HAMMER project uniquely focuses on malaria and its effects on human and non-human primate hosts. Cure for jet lag: flashes of bright light into the eyeballs while you sleep. Timed flashes of light during sleep may be the best way to combat jet lag, a study has found. Researchers found that exposing volunteers to short “camera flashes” of light as they slept reset their body clocks. Using the flash therapy the night before making a long trip could help a traveller quickly adjust to a new time zone, the findings showed. Jet lag – the body getting out of sync with a destination’s sleeping and waking hours – can cause fatigue, poor concentration and performance, a general feeling of malaise and stomach upsets.

Light therapy treatments for sleep disturbance – which involve sitting in front of bright lights during the day for hours at a time – were already known to alleviate symptoms of jet lag. But a new study of volunteers found that exposure to brief bursts of light while sleeping was far more effective. “We have found that most people can sleep through the flashing light just fine.” “If you are flying to New York tomorrow, tonight you use the light therapy.

New medical techniques. 'Case is made' for Anthropogenic Epoch. Image copyright Thinkstock There is little doubt now that we have entered a new geological age, believes an international scientific panel. The team, which has been tasked with defining the so-called Anthropocene, says humanity's impacts on Earth will be visible in sediments and rocks millions of years into the future. The researchers are working towards a formal classification of the new epoch.

An open question is the formal start date, which some panel members think could be the 1950s. First results from human young blood rejuvenation trial expected. Dracula was on to something. The idea that blood from the young can rejuvenate an ageing human body might not be too far from the truth – but no biting is required. Next year we’ll see the first results from a trial that has given young blood to people with mild to moderate Alzheimer’s in the hope that it will improve their symptoms.

Study of Holocaust survivors finds trauma passed on to children's genes. Genetic changes stemming from the trauma suffered by Holocaust survivors are capable of being passed on to their children, the clearest sign yet that one person’s life experience can affect subsequent generations. How Bacteria and Brown Fat Can Spur Weight Loss. New Medicines and improvements in old.

Future - The air that makes you fat. Uk.businessinsider. Do we underestimate the power of plants and trees? Image copyright Getty Images. Stem-cell scientists redefine how blood is made, toppling conventional 'textbook' view from 1960s. International research project examines effectiveness of tried and tested medicines for different diseases. We're finally cracking the secrets of what makes us sick. iStock.

Neuroscience. Cancer. Your stomach bacteria determines which diet is best for weight reduction. New research enables "tailored" diet advice -- based on our personal gut microbiome -- for persons who want to lose weight and reduce the risk of disease. Deep Genomics applying Deep Learning AI to genomics. Deep learning is a type of artificial intelligence in which computers learn to identify and categorize patterns in huge data sets. Crispr: Breakthrough announced in technique of 'editing' DNA to fight off deadly illnesses - Science - News - The Independent. Why is the scientific world abuzz about an unpublished paper? Because it could permanently change human DNA.

DNA Scissors Can Perform Surgery On Your Genes. Researchers Make Huge Step Forward In Understanding How The Brain Processes Emotions. "Common disorders" are really collections of rare genetic conditions. How Electronic Engineers Are Helping Us Unravel The Human Brain. Top 10 Unsolved Mysteries of Science. Scientists Finally Explain The Link Between Stress And Heart Attacks. Researchers Use Gene Editing To Mimic A Mutation That Confers HIV Resistance In The Lab. Scientists Make Progress In The Development Of A "One-Size-Fits-All" Artificial Blood.

The High-Tech Headband That Can Make Your Stressed Brain Happy Again. Spare the rod - the biology of poverty and violence. Using HIV To Cut And Paste The Human Genome. Can the Nervous System Be Hacked? My No-Soap, No-Shampoo, Bacteria-Rich Hygiene Experiment. The Robot Will See You Now - Jonathan Cohn. Aging of Brain and Muscles Reversed Through Protein Therapy.

Humans will be kept between life and death in the first suspended animation trials. Erasing A Genetic Mutation. Why A Boston Bombing Survivor Who Lost Her Leg Is Now Able To Ballroom Dance. How a Harvard Team Just Made It Easier to 3-D Print Organs. Wello $200 iPhone case tracks a range of key health vitals. Next-Gen Neural Prosthetics Require a New Materials Approach. World Changing Ideas: A Q&A With Dr. Leslie Saxon, Founder Of The Center For Body Computing.